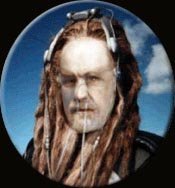 I suppose some of you may find this story amusing; this Onion-like site has declared Psychiatry to be a religion, not a medical science.

"If you dressed up a parrot in a doctor’s smock and taught it some Latin phrases, it wouldn’t be a doctor. It’s the same with Psychiatrists."

If the God of Psychiatry for the last century was the Supreme Superego, it is now the Cosmic Chemical.

"The matter of faith in a deity was also a sticking point but a study of Psychiatric scriptures reveals that Psychiatrists believe in an invisible entity known as “chemical imbalance”. The existence of Chemical Imbalance is stated as fact in the texts though there is no proof of his existence, analogous to a Christian’s belief in God or a Muslim’s belief in Allah."

Now all they have to do is declare Scientology a real religion, and then I can truly deem The Spoof editors to be the Ra of Rhetoric.
Posted by Steve & Barb on Wednesday, June 28, 2006

Email ThisBlogThis!Share to TwitterShare to FacebookShare to Pinterest
Labels: scientology

I nominate Roy for Pope (or would that be pope?)