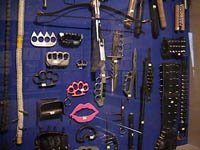 If you ever get a chance to visit Vancouver, I encourage anyone with an interest in forensics to visit the Vancouver Police Museum. They've got a great array of exhibits---historical information about the Vancouver police, recreations of various crime scenes (including the axe used by a sixteen year old to kill his parents back in the 1950's), and a forensic medical display (not for children). One of my favorite displays was the collection of contraband confiscated from arrestees. Several times my first thought was: "How the heck would they hide something like that? And wouldn't it hurt??"

Of note, one picture I saw there was of the top police sharpshooters on the police force back in the 1920's or 1930's. The top five shooters were all women. Ironically, regulations then did not allow female officers to carry guns in the field.
Posted by ClinkShrink on Friday, June 02, 2006

Email ThisBlogThis!Share to TwitterShare to FacebookShare to Pinterest
Labels: forensics

What exactly was the contraband you found so fascinating? I was told you had posted on prison sex toys, and yet there was nothing here. Overall, Clink, a very disappointing post.

Hmm...I guess you missed the very large crossbow right in the middle of the picture?