The Wicked Witch of the West, Behind the Scene 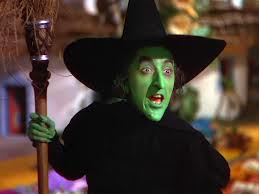 One week from now our legislative session will be over and we'll be left to sort through the wreckage of the new laws that hit us. Every year I do this I wish we had some way to limit the number of bills that could be introduced, to give the public a fighting chance to figure out what their representatives are trying to do to them.

The Shrink Rappers have been pretty busy with this particular session and I've written a short column about it over on Clinical Psychiatry News. Feel free to hop over there and read my piece "A Glimpse Under the Hood." The site doesn't require you to register anymore although there is one small annoying popup ad you have to click past first.

This afternoon is the big day. The House version of our governor's gun bill is going to a vote in a joint committee. If it passes, which everyone expects it will, that will be the final step before it joins the other version already passed by the Senate to become law. We've managed to keep psychiatry out of the decision to take guns away from people and to at least provide some education to the legislators about the limitations and dangers of policies based on categorical mental illness.

It looks like insanity acquittees, criminal defendants who are incompetent to stand trial and people under guardianship will be barred from purchasing weapons, as will be anyone under an active protective order. This addition is required by the Federal government to be compliant with their gun laws. People can petition to have their gun rights restored although the administrative logistics for this have yet to be hammered out, and legislators (in spite of their professed intent to get guns out of the hands of dangerous people) have shown a striking reluctance to enforce seizure of weapons from anyone who falls into one of these categories. And yes, they carved out certain assault weapons out of the list of proposed banned weapons.

The final piece is the Maryland version of the New York SAFE Act. The original bill has been dropped, but it bounced back in the form of an amendment to today's bill which will be voted on this afternoon. The last three days have been pretty intense with discussions about how to protect our patients from getting reported to police. Dinah has already written extensively about this in USA Today and in Clinical Psychiatry News, and I outlined the New York requirements here. We're hopeful Maryland is not going to skip down that yellow brick road. That yellow isn't gold.

Which brings me back to the Wicked Witch of the West. When crafting law, her advice "These things must be done carefully" is a good thing to remember. I thought of this often when looking at bills proposed to modify all of our involuntary treatment laws. Regardless of which way you fall on the issue, the worst outcome is to create confusion. I don't know if any of the changes will actually make it out of committee next week so I won't speculate here, but like most states following all these high profile shootings there was a rush to cobble together a lot of changes while the time was ripe. And it showed in the legislation.

And now for something completely different:

Well, not completely. I listened to a presentation yesterday by Dr. Jeff Swanson, a sociologist and epidemiologist who studies the impact of certain public policy decisions and programs. He was part of a summit meeting on gun policy recently at Johns Hopkins. I listened to 90 minutes of impressive outcome data on gun violence and mental illness. His research provides strong support for the futility of reducing gun-related violence by singling out people by diagnosis. Unfortunately, as we've already seen with the sex offender registries, futility and costly ineffective public policies are not mutually exclusive.

So that's where I've been disappeared to lately. I hope to come up for air soon.

As of last night, Lisa said she had not seen the final (? latest) draft but as of 1 pm the mandatory reporting amendment was not in the bill.

I still don't get that legislators can be working on a bill for months-weeks and in the hours before the vote, they can insert amendments that have major implications that no one has time to analyze or object to.

You should have given me a heads up about those conference calls. I have been the unwanted step-child on this committee all season.

Just got word that the mandatory reporting amendment was voted down in joint committee. The chair quoted from our letter of opposition and encouraged clinician discretion instead. This is great news.

Too soon to celebrate. It can still be brought to the House floor.

It is so unfortunate that the national revulsion that followed Sandy Hook has so quieted down that virtually nothing of substance has been done. Even something as common sense as limiting the size of magazines has been defeated. Little by little, though, our culture will change and regard gun ownership (with the exception of rural cultures that take hunting seriously) as more of a liability than a benefit. When will we have the next Sandy Hook? Sooner than we would like.

Dear Jesse-- I hope not. But none of these laws has any power to stop most of the spree shooters we've seen. These are often unpredictable acts and rare acts, and none of the spree shooters would be caught by any of the laws passed...many owned guns legally and still would with the changes in laws, and absolutely none of the laws addresses removing guns from the family members of people who have may be dangerous.
Gun control for overall safety? The gun owners are so much better organized than those who want gun control. I may never get over the numbers fo gun owners who turned out in Annapolis to rally against gun control, and this ia a blue state.

I'm pretty sure the Wicked Witch of the West says, "These things have to be handled deeeeelicately."