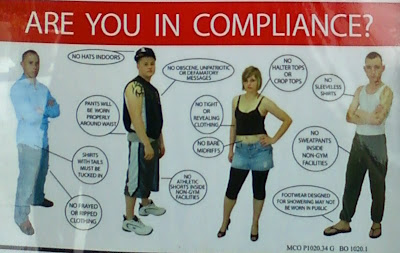 I asked Jesse to blog about non-compliance, and at first, he was non-compliant, but now he's just being resistant.  Or oppositional?

Oh, truthfully, I don't like the term 'non-compliance' either.  It's a term I rarely, if ever,  use because I would never think of someone who stops a medication because it was too expensive, or  because they were having side effects, or because they felt better at a lower dose, or decided that a different medicine worked better, as being "non-compliant."  It is a pejorative term, and people need to be their own medical advocates, and the decision to take or not take a medication is a personal one where many factors come into play.

Why I Don’t Want to Blog on Non-Compliance

I try to be compliant with most of Dinah’s requests, but this one threw me and it took me a while to realize why. The term is being, in my view, misused here when it come to psychiatry. Compliance is a term that is best used in the legal/governmental sense. It implies bending someone to one’s will. “The Office of Medicare Compliance” for example. They make the rules, or at least administer them, and those affected had better comply.

The word compliance is frequently used in medicine. If a doctor said, for instance, “I told the patient to take his penicillin twice a day for two weeks, but he stopped it after two days,” we would understand that he had not complied with the instructions but we would not know why. Patient non-compliance could be due to an unpleasant side effect, difficulty in following the instructions, expense of the medication, and so on. It does not imply disobedience or ill will, but only that the advice was not followed.

Yet in psychiatry, and particularly in the type of psychiatry that I practice, that of psychodynamically-oriented therapy with completely voluntary adult patients, the term itself seems particularly wrong. Certainly I have opinions and express them, prescribe medications, suggest intervals between appointments, and occasionally even give direct advice, but I have never thought of “compliance” in all the time I have been practicing and never think of patients as being “non-compliant.” A patient might come in for his session and, for reasons I might not understand that hour, sit the entire time without saying a word. That is his choice, and my job is to be sensitive to what is going on and try to help him, not superimpose my own values and expectations.

Do patients come late, or not at all? Of course. Not take medication or stop it without having called me? Certainly...

Wait! Let’s pause at that last one: If a patient does not call me in regard to a medication issue, and stops it, is he non-compliant? It is much more fruitful to try to understand, with him, what led him to do as he did. “I didn’t want to bother you over the weekend” he says. I could simply say that it would not have been a bother, or I might try to understand what he felt. “I thought you might be annoyed with me if I called.” “I felt it was my fault I ran out of the medication.” Or even “Perhaps your wife would have answered the phone and I would have felt like I was intruding into your private life.”

One does not need psychoanalytic training to sense that there is a lot to be gained that could be helpful to a patient by being non-judgmental and thus being able to help him explore his thoughts and feelings, to see how they may be playing into his troubles.

So I find it much more useful in trying to understand and help my patients to be as non-judgmental as possible. And non-compliance is a judgmental term, better left to that Office of Medicare Compliance.
Posted by Dinah on Saturday, March 30, 2013

Really, it's up to the patient to make the final decision. I know some of the nasty side effects i've received from taking anti-depressants in the past. It's not much fun. It's really up to the patient to decide what they want to do based on the expert advice they receive from their doctor or psychiatrist.

If I loathe you as a psychiatrist but am forced to see you, I will be non-compliant with my meds on the first opportunity I get. Terminology here is correct, I'm intentionally refusing to comply with your decision on my forced treatment.

If I'm having awful side-effects from a medication, noticing myself approaching hypomania, etc. I will stop medications or lower doses as necessary. In such a case, I'm being non-adherent, not non-compliant. There's no protest, no ill intent, I'm simply making a judgement on what's best for me at a time when I think I cannot reach you.

I think the distinction between the two is important especially as a simple word can taint one person's view of another, and both are worth exploring, non-judgmentally, with the client to see what their motivation is and where it stems from.

@Anon: excellent point. Often the patient adjusts medication in a way that works better. Good treatment is a collaboration. Often a patient will suggest a medication and often it proves to be a good choice. For instance, a depressed patient might say "my sister has similar symptoms and has had good results from sertraline. Should I try that?" So in that case not only is there the possibility of a genetic connection between the symptoms but a positive expectation of results.

BTW, Brian M above is a link to an advertisement (or something worse). Don't go there!

"Non-compliance" does sound bad, as though there were an assumption that somehow patients have some sort of moral obligation to comply.

But I don't read it that way any more, not after having read various articles and posts discussing treatment strategies and noting that "non-complaiance is an issue with [such-and-such a recommendation or medication]." This use of the phrase makes it clear that the problem is not seen to lie with the patient. So now I read it strictly neutrally, as an observation of behaviour with no implied judgement of motivation.

Why would anyone even expect someone to "comply" with taking a medication or undergoing a treatment that makes them feel worse?

Sometimes the medical world uses the term for those who won't stop smoking or stay on a specific diet, as though people choose to have unhealthy habits the way they purchase a shirt, and the term does not take into consideration the struggle involved, more for some than for others.

I think what the term does is loosens the liability and responsibility the doctor has for controlling the behavior of others. We don't necessarily think badly of patients who don't do what we suggest, but documenting such things does imply that we're less responsible for the outcome, and that seems okay.

I, like Jesse, don't use the term because I do think it has a pejorative/judgmental edge. The only time that I care if a patient does not do what I suggest is if they call me repeatedly in distress (especially if there is screaming, sobbing, and catastrophizing involved on weekends) and then don't do what I suggest. I prefer quiet non-compliance. But "I feel better on a lower dose," is not non-compliance.

I don't know how people would even go about studying this topic because I know even with myself there have been different reasons for non-adherence at different times. Once it was because I felt good, got busy, and just didn't think about it so I missed some doses. Once I decreased a dose because of side effects and didn't want to call the psychiatrist and bother him since it didn't constitute an emergency, even if he would have been okay with it. Once I didn't get an antibiotic filled because I decided to just wait a little longer and see if it was a virus, and it was and I got better without it.

I don't make a habit of not following directions but there have been occasions, as I'm sure is the case with most people, where I have not always adhered to the recommendations. I suspect a lot of non-adherence is simple forgetfulness. I don't know how many times I've asked myself did I take the dose already today or not, and then I don't want to risk over doing it. Those pill boxes come in handy for forgetful people like me.

"Why would anyone even expect someone to "comply" with taking a medication or undergoing a treatment that makes them feel worse? "

That's been the story of my treatment for quite some time now, and when the stabilizer is making you bleed from bladder and/or kidneys, and three docs in one week and a half all say keep taking it plus some generic Ditropan, cause if you don't you'd be so manic you'd do things you couldn't live with and then kill yourself, well, worse is relative.

However, after three months of following that advice, heck i'd told my GP that taking the Lamictal, I was starting to be able to be aware of my kidneys, could feel them just from discomfort, from time to time, he said keep taking it. So I did, he deferred naturally to psychitrist as he ought. However, three months later and I'm in constant abdominal discomfort and pain, can feel my kidney(s) on an almost daily basis, and even a slight lowering of Lamictal dose caused, within a day, a shockingly noticeable improvement in symptoms. Going back up caused a noticeable return to the previous level of symptoms. So all the docs who told me the drug doesn't do that . . . well, I'd spent most of a year having things get worse and listening to that, keep taking it though it makes that worse. Still better than dead, I guess, however it got so bad we had to stop it anyway.

Posted a bunch more about it at my blog, but when you say why would someone take something when it makes you feel worse . . . well, you sometimes have to weigh the lesser of two evils. However, I'm at that point again, and frustrated . I wish it was as simple as complying or not but I'm in a land of grey.

Unknown said...
This comment has been removed by a blog administrator.
April 11, 2013