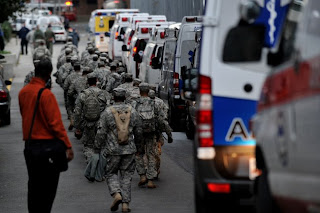 Little did I know as I was writing that last post on Sunday that just a few days later some of the same docs I was listening to and learning from would end up evacuating their hospital. When I read about the desperate conditions at Bellevue Hospital in New York as the storm struck and the remarkable efforts to evacuate every one of those hundreds of patients---without any loss of life, to my knowledge---I was impressed and humbled.

Every hospital and institution theoretically is supposed to have emergency policies and procedures, and is supposed to run occasional disaster drills to make sure everyone is aware of them, but who ever really believes they'll be needed or used? Those kind of large scale, potential mass casualty events seem to horrible to think about or really imagine could happen. Until they do.

There's not much I can do from a distance, but from my brief contacts with the Bellevue docs I know that those seriously mentally ill patients and prisoners received the best care possible under the worst possible conditions.

Let's hope that when the storm clouds clear and the rubble is swept away, the hospital that re-emerges is a newer, better and brighter one. The patients and staff deserve it.
----------------
Addendum from Dinah: there is an article on the Bellevue evacuation here.

Posted by ClinkShrink on Thursday, November 01, 2012

Well said Clink! Your post made me remember a "disaster preparedness" process that occurred in a UK secure forensic hospital where I worked in the run up to Y2K. We had a local prison officer smuggled in to climb the fence so of course all the alarms went off and the place went into lock down. Then the electricity was cut. Then the generators were switched off (thankfully we used keys rather than swipecards). And then there was a fire alarm. Horizontal evacuation was used, which was great apart from the pharmacy was next door to one of the wards and we weren't going to unlock those doors! Plus one of the docs got "secluded" for several hours after cutting through one of the wards without an ID on... Was pretty slick to be fair - much more so than some of the non-mental health places I've worked. Brings to mind one of the last weekends I worked in the pharmacy in my previous job - contactors in the ceiling above knocked the tip off a sprinkler - fire alarms went off, we evacuated, shooed out all the canteen staff next door who were wondering what the noise was, saw the water running out of the floor above, got clearance by fire brigade to re-enter the building and then I have to call them back out to deal with a flooded pharmacy... Given how much of a ruckus this caused, I have full sympathy for and admiration of those folks dealing with "proper" emergencies and natural disasters. I'm always inspired and humbled by the resilience of the people involved in secure services, both staff and patients.

Bellevue was lucky, in that they had a disaster plan that was relatively new - from last year, when hurricane Irene was essentially a washout in the NYC area (I am aware it was devastating on a large scale) and ultimately had no fatalities. I sincerely hope that all the other hospitals in this country will take heed and develop one. It is also worthwhile noting that also hospitals in the NYC area had to evacuate as well - most notably NYU-Langone, which literally evacuated infants in the NICU down 9 flights of steps with nurses and techs manually using oxygen bags into a stormy night with no electricity for miles. Thankfully, neither NYU nor Bellevue had fatalities. It could have been so much worse.

Tyke: Wow, that's what I call a disaster drill! Each correctional facility I've worked in has also had a disaster preparedness plan and also did drills. The problem gets magnified substantially when you're moving people who have to be kept segregated or otherwise secure.

L: It's so weird how previous events can be protective. Here in Baltimore we had a weird, unexpected severe storm (which I've since learned is called a 'derecho') which knocked out power for a couple weeks in some places. Fortunately, it also took care of some of the older and more brittle trees that would have come down in Sandy. The power company got such bad press for the response to the derecho that when Sandy was forecast they were right on top of things.