The Trauma Recovery Movement: Where Did It Come From? 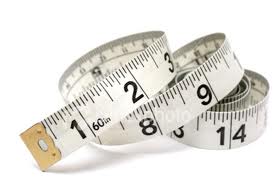 For anybody who's interested, you can follow along with me as I learn about this stuff. I put the tape measure pic up because I'm learning about trauma treatment and outcome measures.

I was curious about SAMSHA's National Center for Trauma-Informed Care so I did a little background reading based on material I found on their web site. (And if there's anybody reading involved in this who would like to jump in and provide more information, please do. Shrink Rap also allows guest posts!)

It appears that this arose out of a SAMSHA initiative to encourage study of innovative program delivery systems. It was recognized that certain groups of people had severe and overlapping treatment issues. In other words, there were women with high levels of childhood abuse, adult violence, mental health issues and substance abuse. They wanted to figure out how to best provide treatment to these folks and they theorized that the key link or ingredient, a "cause" if you will, was the trauma history.

A two-phase, multisite study was designed to look at this problem. (1) In the second phase, nine cities were selected to participate. They enrolled thousands of women in a variety of treatment settings. The women all had one or more of the three issues: trauma history, substance abuse and mental health problems. One key fault is that there was a non-random assignment of the patients: they were allowed to self-select the "intervention" versus "usual care" condition. Both the trauma and usual care groups provided mental health and substance abuse counselling. The trauma group was additionally provided a women-only therapy group that employed one of four trauma treatment recovery models. The usual care group provided some additional not clearly specified intervention (I didn't have time to read in detail, it sounded like a generic social skills group).

The results were difficult to interpret because it turned out that two of the nine sites had significantly different study subjects. They had to break out certain sites from the rest to analyze the data. However, when pooled two interesting findings came out: the first was that a program that integrated all services (mental health, substance abuse and trauma/generic) was better than a program that offered disjunctive services. The second finding was that the more core services the patient used, there was a slight but significantly worse outcome. (2)

Outcomes were measured at six and twelve months. Overall mental health scores were measured using the Global Severity Index (GSI) and the Brief Symptom Inventory (BSI). Mental health status was improved more when services where combined, even when there was no change in addiction severity. Traumatic symptoms also improved.

What I take away from this is: integrated treatment is better.

That doesn't surprise me. Maryland is reorganizing it's public health services to reflect this, and the Affordable Care Act also recognizes this. There's also been at least one study (I've got it pinned on my pInterest board) which showed that integrated care post-release can decrease felony recidivism.

But improvement with integrated care does not prove that the treatment effect comes from treating the trauma. I think that's the mistake. This model can be useful for anyone with complicated co-occurring conditions, male or female, traumatized or not.

When i went through a traumatic experience and was suffering with PTSD a big amount of counselloring helped me, talking about the issue over time helped ease it, it's never really gone through that therapy but it did help in a big way x

It was a year ago whwen it ocurred to me to specifically ask, "How does someone get over trauma, how does that whork, what do you do?"

Sometimes these perhaps obvious questions are things that are anything but obvious to me.

I remember shortly after that appt. letting what he'd said slide out of conscious memory; I don't remember what was distressing about it, but I've been meaning to ask again . .

I am so tired of blurting out how traumatized I still am by the surgeries and recovery . . I had wondered why even having psychotherapy during all that (well, as son as I could manage the trip there abd back, all the physical stuff). I know why, though. I was so . . businesslike about what needed to be done, you just do what needs done to recover, and keep plugging away. You just do it bit by bit, and there was no sense in feeling sorry for ones' self because, well, that wouldn't do any good or help you get better . .

It isn't that I never cried from things not physical, but I almos never just sat with how I felt and what I was going through, and acknowledge it for the hell it was, for how awful it was. I mean, I knew it was hell, but I shoved that aside or walled it off, because I had to get on with the business of getting better. I took the same approach to talking about the surgeries etc. in psychotherapy, and now I feel that I was too . . . marching forward, not acknowledging . . something about it, something that I still can't define. Since my pain never went away, I still struggle with what it's left me with, I think it's safe to suggest that I had more pain overall than someone whose pain did go away as they recovered . .

So many things to work on, it's hard to get to stuff. I'm tired of feeling whiny about my recoveries . . also, a large part of the hell was how my mental illnesses and disorders made some aspects of recovery twice as bad or more than just the physical; the things these caused were so horrible to face and wrestle with, ove and over . .

And here, see, there I go on. If I wasn't buried in a variety of traumatic feelings related to other things going on right now in my life, I suppose I'd try addressing the surgical and trauma recovery thing . . .

There's been a post i've been trying to write for two years, about the worst of the worst of recovery, when fear beyond anything I can describe made what needed doing at that point of recovery the worst thing I've ever faced (that didn't involve someone else). It was so bad, that I almost killed myself rather than do the second surgery and do it all over again . . .

I found all of these trauma recovery posts interesting. I don't know how one defines recovery. It's not like you can really forget the trauma or pretend it never happened, so it shapes your life going forward. As a result, recovery probably can't be going back to where you were before. But if it shapes a person's life, to what extent are they still traumatized? I have no idea.