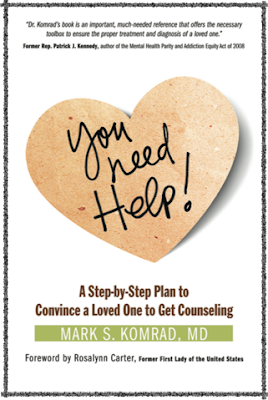 The title says it all -- the book is about how to get help for someone who doesn't want help, or doesn't believe they need it.

So I thought I'd bring our readers into the discussion here.

If you're a mental health clinician and one of your friends or patients starts to talk about someone they believe needs help, what suggestions have you made in your professional capacity that have proved to be helpful?

If you are the friend or relative of someone who needs help, but has resisted getting it, what have you done or said to propel that individual into treatment?

And finally, and perhaps most importantly --

If you're someone who didn't think you needed help, what got you into treatment?

Start commenting and Dr. Komrad has told me he will check in and converse with our readers in the comment section!
Posted by Dinah on Sunday, November 11, 2012

I had to want help myself, not by anybody forcing it upon me. The more people tried to push me into getting help, the more I withdrew into myself and the worse I got, and it ultimately didn't do any good since I still resisted help. It wasn't until I decided myself that I wanted help that I finally got the assistance I needed.

The mistake made in my situation was that people tried to forcefully steer me in the direction of help rather than simply talking to me about it and allowing me to make my own decisions. People were trying to decide for me that I needed help. Eventually those people gave up and, when given space and time to think things through and decide for myself, I did choose to get help.

The same applies to those that finally do help me; trying to force me into something I've already said I wasn't up for doing only results in a broken doctor-client relationship. Externalizing your mind-discussion to where it includes me in my health and acting as my ally instead of as a dictator results in me complying with my medications instead of lying about taking them.

So really, talk about getting help, suggest it and let them know you're there to help guide them when they're ready, but don't try to force the person into it.

What got me into treatment was hearing from someone I loved and respected that she had seen a therapist and taken medication before. My reluctance stemmed from fear of being broken, different, unfixable, and hearing that someone I respected and valued had experienced these things made me more willing to try. That said, I was 14 at the time. Not sure how well it would have worked at 30.

I don't need a book to make me feel lousy for not being able to get my partner help for alcoholism. Here is free advice. People tend not to listen to any pleas to get help. Threats and nagging and offers of support and love do not work. People get help when they have lost everything. If you love someone who needs help that badly, make sure you get help for yourself first. You are gonna need it.

I'd be interested in Dr. Konrad's position on involuntary incarceration or medication

If I weren't so broke, I would buy a copy. If I see it in a library, I will give it a read.

My best friend and my then-wife sat me down together at a Very Special Happy Hour and made me write out a contract -- that I would find a therapist and start counseling within the month -- and sign it. I think that gave me accountability and also the knowledge that people outside myself and outside my relationship saw that I needed help, and that gave me the push I needed.

In my 25 years of practicing psychiatry, about 15% of my practice has involved people who have come to consult me,not about their own mental health symptoms per se, but about someone in their family or a friend, who is clearly in emotional trouble and needs to be convinced to get state-of-the-art evaluation and treatment. In these consultations, we brainstorm a variety of approaches, from the most encouraging, facilitative compassionate approaches, through more significant interventions. This book is my attempt to transmit what I have learned from these clinical experiences.

In the book, I start by looking at a wide variety of reasons why psychiatric troubled people often don't take themselves to a professional for evaluation. I cover a wide territory here. I then take the reader systematically through all the things that have worked in these consultations in the last quarter century, from how to actively listen and persuade, through recruiting more allies into the effort, and even through the use of latent power inherent in family relationships that often goes under-utilized (one of the most important things I've learned to help families do). Finally, I have an introduction to the system for involuntary evaluation--when to use it, how to use it and, in those rare cases when it is necessary, how to help your person of concern get the best possible outcomes in that system. You can read a summary of each the book in the excerpt of the book's INTRO, which is posted on it's website:

Former First Lady Rosalyn Carter, who has made her career advocating for people with mental illness and access to treatment, was kind enough to write the Foreword to the book. There are a very supportive endorsements on the covers, from both Senator Patrick Kennedy and Carrie Fisher (who is barnstorming the country with her wonderful one-woman show about her experiences with mental illness and treatment: "Wishful Drinking").

Seeing as how I was having problems from a relatively young age, I was taken to a therapist at the school's urging when I was in 4th grade. That was a disaster and created a belief in me that professional help was never going to work for me. And that pretty much held true for 20+ years. I would like to say that people may urge you to "get help", but often, they don't understand what constitutes "help". I think people have in their mind that you'll go on meds and "be better". If only it was that easy.

I had pretty much the same experience. Forced school counseling at a young age caused far more problems than it did help; it made it incredibly hard for me to convince myself to get therapy and to trust my therapist as an adult,

I sought "help" once, years ago, and after being verbally coerced into hospitalization ("we can make you if you don't agree"), after seeing a number of psychiatrists, a greater number of therapists, and taking God knows how many psychiatric drugs, I realized that the much vaunted "help" is a myth. There is no real help, just talk and drugs. Both useless. And expensive. Very, very expensive. So, I took myself off the drugs, stopped seeing the mental health experts, and resigned myself to the situation. One day it will end;
with any luck sooner than later. That thought is more help that the
legion of psychiatrists and therapists ever were; and if I knew then what I now know, I would never have sought professional "help" in the first place.

Like others here have mentioned, it was forced treatment that caused me to avoid further psychiatric treatment for many years. I went through a forced hospitalization for depression while in my early twenties and this my introduction to psychiatric care. Needless to say, I wanted no further part of that. After that experience, i made a promise to myself that I would never again turn to anyone who had the power to do that to me.

My therapist respects my feelings on this topic as she knows how destructive this event has been in my life and the difficulties with trust that it has created. Forced treatment was never an issue with her, however when she began encouraging me to see a psychiatrist again, I said no way. It took years of encouragement by her to finally agree to see a psychiatrist she knew and recommended. Even though my therapist has known this psychiatrist for many years and has assured me that he will not do that to me, I am still quite guarded with the information I share with him.

Sometimes people avoid psychiatric treatment because they don't want to risk other people deciding for them what will happen to their body. Should i ever be forced into treatment again, that would be the end of psychiatric care for me. I would move to another state to avoid forced treatment, were that necessary.

The psychiatrist i have now respects my opinions and decisions (so far). He treats me with the same respect that my PCP and other physicians treat me, talks to me like the adult that i am, and respects my right as an adult to make my own decisions about my own body. i have not noted even a hint of paternalism from him, or i wouldn't have returned.

aire bra
To leave the world a bit better, whether by a healthy child, a garden patch
or a redeemed social condition;

I read the book on kindle. I thought it was well written and interesting.

There were some parts i disagreed with, though. The author tells the story of a homeless woman with mental illness who stops going to the shelter and subsequently freezes to death outside. This is used as an argument for forced treatment. i disagree. i think it's an argument for housing. If someone is paranoid, the last thing they are going to do is sleep in a noisy, overcrowded shelter with a bunch of strangers and follow all of the rules and regulations required of her. Would the outcome have been different if she had had access to a quiet, single room to stay in or a cheap apartment without a bunch of rules and regulations that she could not or would not follow? i suspect it would have. Treatment is supposed to be the least restrictive. Forced treatment should not be our response to a mentally ill person who is homeless. We should find them a home. Housing first.

I had been unstable on a serious of medications for years, but had been too proud for (and scared of) intensive therapy. No one forced me.

After the last of a series of hospitalizations, my family found out how badly I had scared the children. At that point they insisted on therapy. Although it wasn't stated, I thought that the implication was that I might lose parental rights if I did not comply.

I was terrified, because I had been using my feelings for them as my reason not to attempt suicide. At that point, not only did I get therapy, I found the right meds. My life is 100% better and, more importantly, so is theirs.

The direct approach may sound abrupt and unkind, but in our case, it saved our lives. I regret that we lost so many years and that they suffered so much before it happened.