The Cat Lady Really Is Crazy 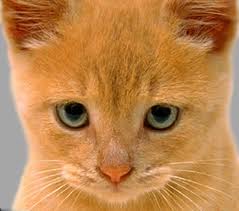 In the March issue of Atlantic magazine there is a must-read story entitled "How Your Cat is Making You Crazy", an interview with neuroscience researcher Jaroslav Flegr. Flegr has been studying the effects of the parasite toxoplasma gondii upon humans. Toxoplasmosis is a parasite endemic to outdoor cats, and the reason why pregnant women are always counseled to avoid the litter box.

I had heard about this line of research before through casual reading, but until now I hadn't realized how strong some of the data actually were or the more subtle and far-reaching effects infection with toxo could have.

Flegr became curious about toxo after incidentally discovering he carried the parasite himself. He wondered if infection with toxo could explain some of his own quirks, specifically his lack of fear and irrational calmness in the face of danger. He knew that in rats toxoplasmosis caused confrontational and overtly dangerous behavior: a rat with toxo will completely lose it's natural fear of cats and will seek out interactions with them.

So he set out to study toxoplasmosis infected people. He discovered that there were subtle but significant differences in the personalities of people who carried the parasite, but the differences were based upon gender. Infected men were cautious and suspicious, socially withdrawn sloppy dressers. Women with toxo were more extroverted, meticulous dressers. Infected humans as a group were also more than two and a half times more likely to get into car accidents---a difference that might be due to both fearlessness and slower reaction times seen in infected people.

Then there was the relationship to psychiatric disorders, the aspect I had already read about. Some neuroimaging studies have shown that people with schizophrenia who show reduced grey matter volume are almost all also positive for toxoplasmosis. This is particularly striking given that toxoplasmosis has two genes which can increase the production of dopamine.

So now when I read articles purporting that psych meds shrink the brain I'll know what question to ask first: "Did they control for the cat?"
Posted by ClinkShrink on Thursday, February 09, 2012

87% of French people are seropositive for Toxo. Does that tell us anything?

I read the Atlantic piece. Very entertaining reading. As science, though, it's crap. Sorry to burst your bubble.

But since this is Shrink Rap, I can't resist commenting on the easy transition in the article back and forth between comments regarding variant personalities and psychiatric illness (of which the latter is not implicated at all in Toxo infections). We're not conflating the two, are we?

wv = quityp (put down that keyboard!)

Just did a quick literature search on Flegr. This is my favorite abstract.

The evolutionary history of testicular externalization and the origin of the scrotum.

Kleisner K, Ivell R, Flegr J.
Source
Department of Philosophy and History of Science, Charles University, Vinicna 7, 128 44 Prague, Czech Republic. kleisner@seznam.cz
Abstract
This paper re-examines the evolution of the scrotum and testicular descent in the context of the recent phylogeny of mammals. The adaptive significance of testicular descent and scrotality is briefly discussed. We mapped four character states reflecting the position of testes and presence of scrotum onto recent mammalian phylogeny. Our results are interpreted as follows: as to the presence of testicondy in Monotremata and most of Atlantogenata, which represent the basal group of all eutherians, we argue that primary testicondy represents a plesiomorphic condition for Eutheria as well as for all mammals. This is in opposition to the previous hypothesis of Werdelin and Nilsonne that the scrotum may have evolved before the origin of mammals and then repeatedly disappeared in many groups including monotremes. We suggest that the scrotum evolved at least twice during the evolutionary history of mammals, within Marsupialia and Boreoeutheria, and has subsequently been lost by many groups; this trend is especially strong in Laurasiatheria. We suggest that the recent diversity in testicular position within mammals is the result of multiple selection pressures stemming from the need to provide conditions suitable for sperm development and storage, or to protect the male gonads from excessive physical and physiological disturbance.

I am always suspicious of this kind of study. The details of the study are vague, the external validity is too narrow, and there were too many variables in play. I wonder about the theory that infected females are more attracted to infected males. After seeing the photo, could it be he was looking for something that wasn't there?

The quick change from feline parasitism to human scrotal development threw me off of my game. It was good for an unexpected smile.

I just did a quick skim of PubMed and there were 82 articles looking at toxo and other infectious agents in schizophrenia, bipolar disorder and suicidal behavior. I don't think you can say that psych illnesses aren't related at all to toxo infections. A number of studies have replicated the significantly higher toxo antibodies in people with schizophrenia compared to controls, and one prospective Danish study found neonatal toxo titers were significantly correlated with later development of schizophrenia. Yes, it's definitely not a settled issue but there's enough there to make you think and go "hmmm....."

Spritz: Yeah, the Atlantic piece tried to cover all the bases of the toxoplasmosis picture so it didn't really give justice to any single aspect. But, it's not hard core science reporting. BTW, I checked your profile---where do you like to dive? (talking about quick changes)

Oh, and pregnant women should give their cat away until they deliver. I remember that study about toxo. Sigh, I remember when we did not call it neuroscience. Now there are neuro sci researchers lurking in every corner. Kind of like cats.

@ Clink- - - Yes, quick change indeed. I enjoy the Gulf of Mexico. There are quite a few wrecks and rigs that are nice. I have yet to go anywhere exotic due to limited time. I was forced to limit myself to lake dives for a while. That is good for rescue and recovery training though. Plenty of submerged car wrecks. I know....exciting. I never claimed to be interesting.

As for the study, you are right. It was a simple study that most likely had no one of substantial importance to report to. It can be very hard to stay objective on a study that you have a personal stake in. All of a sudden everything is meaningful. As soon as I see a researcher who claims to identify personally with their study, I write it off for bias.

I am not saying there is no link between toxo and mental health, because there may be, but Flegr strikes me as biased and making a conclusion where there may be none. I find it makes his conclusions more suspect that he has found such different profiles between infected men and women. Maybe men don't care what researchers think of them so come in their gardening clothes and women might care more about the image they project. Maybe he was more critical of the men's clothes, biasing the data. Clothing is subjective, not objective data. When I was a wedding photographer, there was often trouble when a couple came for their engagement photo in that women were often more dressed up than their partner so even if the clothing difference is true, it may have nothing to do with toxo.

I am hoping, though, that in the coming years we find more physical basis for mental illness. Single-celled organisms and viruses may be one place to look and genetics, another.

"I don't think you can say that psych illnesses aren't related at all to toxo infections."

Yes, you can. The evidence in favor is weak, circumstantial, and worse (laughable). And any hypothesis must explain all the empiric phenomena in order to be accepted as more than likely true. Can the Toxo hypothesis explain why 87% of Frenchmen are NOT mentally ill or at least sloppy dressers? (be kind, people!)

Correlation? Perhaps, but rain correlates with wet grass, but no one commits the logical fallacy here, so why do you accept it with Toxo? Go hmm all you want. You can do better than this (e.g., the causal relationship between Treponema pallidum and the cognitive deficits in tertiary syphilis.)

wv = cablum. What your argument goes if you reason in a sloppy manner

That's really interesting but scary. I've posted it on all sorts of mental health forums. That should raise the general anxiety level.

I agree that correlation that does not prove causation and that researchers have not proven that toxo causes schizophrenia. You feel that the correlation is too weak to be considered at all and that's where we disagree. It's curious and worthy of further study I think. Certainly it would not be the sole explanation since, as you've stated, most people with toxo don't get it. The majority of smokers don't get lung cancer too, but there's little question there's a causal connection there (unless you work for the tobacco industry).

Keep in mind Clink, the article was still interesting, whether or not it has any scientific value. I liked the article. Thanks for sharing it.