This is how i Feel today! 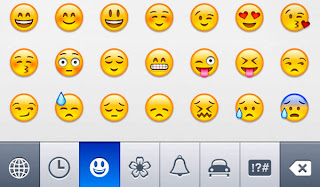 There's an article in the New York Times called If You're Happy and You Know it, Must I Know Too?  I thought it would be a story about moods, but it's a story about writing and emoticons by serious people.  One person said they hated them and un-friends anyone who uses emoticons or LOL or OMG.  Fortunately this person is not my friend, so I don't have to worry about this, but I did think that life is too short to expend a lot of energy on such thing.  And the article talked about how emoticons were initially used by teens and "frothy adults."  What's a frothy adult?  I thought beers were frothy.  So I looked it up and I learned that frothy means "light and entertaining but of little substance."  LOL!


So Shrink Rap will be adding a new feature.  We will be adding a feature to our sidebar where every day all three Shrink Rappers and the Duck will be posting an emoticon to describe our moods.  I'm guessing we'll have to remind Roy sometimes, but he may be able to find an app that lets him post his mood from his iPhone, and then he may decide to change it hourly.  This will enable readers to better decipher our posts within the context of our mood states.  Hope you enjoy this new feature.  And please do end your comments with a smiley face or other emoticon.
Posted by Dinah on Saturday, October 22, 2011

Is there a certain number of :( moods that will trigger mandatory antidepressants for the Duck? :)

No. The more germane question is: Will Clink and Roy kill Dinah when they see this post ; )
If you don't hear from me for a while....

I can't wait to hear the duck 'QUACK'an emoticon!! - The travelling psychiatrist here.Have enjoyed reading your blog, starting mine too, come by here http://travellingpsychiatrist.net

I feel just ducky about this! ;P

Even us geeks in the scifi chats used emoticons back on 90s AOL. (And those bracket hugs like this: {{{{{{{{person-being-hugged}}}}}}}}}} ) Just how far back are we going to say when emoticons were "initially" used? Now I'm picturing 8" disks and dot-matrix screens.

I have to agree with the earlier comments used in the article about using emoticons to indicate jokes or sarcasm, rather than actual emotions. I use :p a lot. (The Yahoo version has a smile too!)
It looks like the holdouts are having trouble distinguishing casual internet conversation from formal writing. An online conversation isn't an essay, it's a conversation. A Facebook status or a chat room statement isn't formal writing; since when is it supposed to be? Perhaps I shouldn't be criticizing too much because I am somewhat of a stickler for basic netiquette.. But it's called "netiquette" for a reason: it's unique to internet interaction. It's not the same as formal writing standards, nor is it meant to be.

She must be mocking. None of us are putting moods up -- she's making that up. Though if you want to do this, M3 seems to be the best one for all of depression, bipolar, PTSD, and anxiety