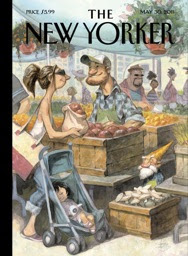 In balancing rights against needs, though, psychiatry is stuck in a kind of moral impasse. It is the only field in which refusal of treatment is commonly viewed as a manifestation of illness rather than as an authentic wish.
-- Rachel Aviv, God Knows Where I Am, The New Yorker, May 30, 2011

In the May 30th issue of the New Yorker, Rachel Aviv writes about the plight of a woman who does not believe she has bipolar disorder, or any psychiatric illness for that matter. It's a poignant and tragic article about a woman who is incarcerated for a crime, spends a year and a half in jail before she is found incompetent to stand trial, then goes to a psychiatric hospital where she remains until she is discharged with no plans for housing, money, follow-up, or notification of family--- it's not that the hospital wouldn't offer any help, it's that the patient wanted her freedom and would not allow interventions. Aviv gives examples of the woman's psychosis as a motive for her behaviors. Free, she finds a vacant farmhouse and breaks in. She is fearful of being re-captured, and remains hidden in the farmhouse, subsisting on 300 apples. She journals, she appreciates nature, and she reads books she finds in the attic. In mid-January, three months after her release from the hospital, and 39 days after she ate the last apple, she dies of starvation. Her body was not found until May.

Aviv's article focused on two aspects of the psychiatric system: the emphasis on the patient's insight as a focus, even requirement, of treatment, and the issues of involuntary treatment in patients who aren't posing an imminent threat of violence. I couldn't quite tell where Aviv stood on these issues--she seemed to waiver from condemning a system of forced care, to condemning a system that would let an ill patient leave untreated with no money and no notification to family members. She definitely does not like that the system would have provided for housing for this patient, but the patient wouldn't sign the requisite forms because they noted that she had a mental illness, a fact she did not agree with. Aviv mentions the concept of "thank you theory" --the idea that once patients get well they will agree that the treatment was in their best interest. She notes that only about half of patients who are involuntarily hospitalized later believe it was necessary. It's a difficult statistic to work with--because it means the other half did believe that treatment was necessary, so how, as a society, do we know what we should do? She talks about advance psychiatric directives.

I'd like to share parts of the article, but I had to buy the issue online to read it and it doesn't seem to let me copy and paste. You can listen to a podcast with the author on The New Yorker's website at:
http://www.newyorker.com/online/2011/05/30/110530on_audio_aviv

The article is a careful and beautifully well-written piece that describes many of the dilemmas discussed frequently here in Shrink Rap: the nature of psychosis, issues of patient rights, the problems faced by caregivers in formulating treatment while following requisite laws, involuntary treatment, and so on. I was lucky to have been able to read it as I'm a subscriber, but for those of you who are not I think it is well worth the cost of buying it.

Of particular poignance in Linda's (the woman discussed) case are the anger and sadness of her sister and daughter, who had not received notice she was being discharged from the hospital because Linda had not granted permission for it, and the efforts of hospital staff to protect her. While the author does not formally address the difference between severe mental illness and strong religious/political identifications, the description of Linda's illness and how it progressed tells us a great deal.

There are no simple answers in this article, which truly describes the complexities of a field in which the mind itself is affected.

If any of you can read of Linda's plight, living alone in an empty farmhouse, keeping her journal, thinking of her marriage and life with a man whom she essentially created as if in a dream, her death weeks after she had eaten all of her apples, too weak to even go out to the road for help, without a sense of deep sadness, I would be very surprised.

I just finished the article. It's beautifully written. I recommend that Shrink Rap readers beg borrow or steal a copy of the May 30 number of New Yorker so as to read it in full.

Just one observation of Clink's review. Rachel Aviv does not "waiver" at all. Linda's denial of due process in court, her involuntary incarceration having committed no crime, AND her having been discharged when she had no means to support herself... ALL these events are paradigms of the disgraceful crimes the Therapeutic State commits against people declared mentally ill. It just happens that many of these people are poor, female, and/or minorities.

Sorry: I see now the author is Dinah, not Clink. The paragraph at the end threw me. BTW,I meant to add (sic) after "waiver". Surely you meant "waver", Dinah. Or did you?

I thought the article was well written and also would encourage people to read it. I agree with Dr. Elyn Saks' comments in the article where she says "Alleviating suffering is not a legitimate reason for taking away people's rights." She goes on to describe how being restrained and medicated against her wishes was one of the most degrading experiences of her life.

Likewise, my experiences inpatient mirror Dr. Saks' feelings. There are worse things than death, in my opinion. I would honestly rather be dead than have to spend my life in a psych ward or ever have to go back there. For me, that would be a fate worse than death.

I thought the discussion of anosognosia was fascinating. It's the bind many psych patients find themselves in. If you resist that which you know is unhealthy (i.e. refusing to glue pictures from a magazine onto construction paper during recreational therapy because it makes you feel like a four year old) then you clearly lack insight into your illness for refusing "treatment." Or refusing medication because it makes you unable to think clearly, causes your hands to shake, and generally feel like crap, then also you must lack insight into your illness. Honestly, refusing treatment was the sanest thing I have ever have done.

People need to have advance directives prior to entering psych treatment, that way they can make sure that their rights and wishes are respected. I like the idea of including a Ulysses contract for those who feel that forced care saved them - then they can get what they want, and I and others can opt out.

Dr. Meecham on psych central writes of his own experiences under psych care and how his opinions have changed since then. I would also encourage people to read his blog on psych central - Guideposts to Happiness. He describes his own mother's suicide after years of treatment. http://www.blogger.com/comment.g?blogID=26666124&postID=4416147495576165654

I have seen many, many people make decisions due to lack of insight. People who are hypertensive but do not change their behaviors and refuse to take their antihypertensive meds, unfortunately do die from stroke. Diabetics who continue to eat candy and cake and do not change their behaviors can (and some do) lose their feet, go blind, and die. It's sad, and we could likely save them if we forced them to adhere to the treatment recommendations. But, I would not support dragging them from their homes to force them into doing what I think they ought to do, just to save them.

Sorry, wrong link in my previous post. Hope this works.

Perhaps listening to the patient is what is needed. Talk therapy. Not meds.

This was a deeply tragic story.

However, as a person whose experience with psychiatry has been only a tiny, pallid fraction of Linda's, I can understand why she would prefer the risk of starving to death rather than even glimpsing another psychiatrist.

I'd do it myself.

PS When the NYTimes ran their series on anosognosia a year or so ago, I thought it was a perfect description of psychiatrists, their delusions of grandeur, and their prescribing practices. How perfect that a profession so deep in denial ascribes the same flaw to their patients!