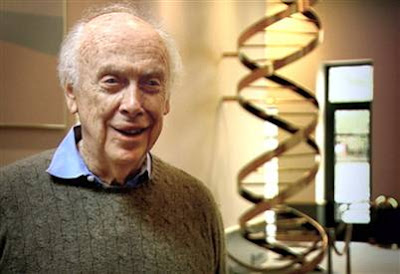 "To succeed in science, you have to avoid dumb people... Even as a child, I never liked to play tag with anyone who was bad as I was. If you win, it gives you no pleasure. And in the game of science-or life-the highest goal isn't simply to win, it's to win at something really difficult. Put another way, it's to go somewhere beyond your ability and come out on top."
-- James Watson, "Succeeding in Science: Some Rules of Thumb", Science, 261, 24 (September 1993): 1812. September 1993.

Yesterday, there was just a little snow, a three-inch surprise in the morning, and schools were closed, things were surprisingly still. My agenda included a trip to Hopkins to hear Nobel prize winner James Watson speak. Was it canceled? Did I really want to risk being caught in the snow coming home? No, it wasn't canceled. And when would I ever get the chance to hear James Watson speak? So yes, I did risk the weather, and it was fine.

I've never seen Hurd Hall so packed. No chandeliers, but people were hanging off the balcony, snow date and all. There weren't a lot of psychiatrists there, even though the lecture was sponsored by the Department of Psychiatry, but this meant I got a front row seat in the reserved section.

Dr. Watson was an entertaining speaker, to say the least. He structured his talk around his "rules" for life, and said there were rules involved in the race to find the structure of DNA. Oh, I wish I written them down. He started something like this, "I was a boy on the South Side of Chicago and the first rule was Don't fight bigger boys or dogs." His second rule of life had something to do with putting a spin on balls. The rules around the story of the discovery of the double helix included things like don't be the smartest person in the room, don't research the same thing that everyone else is researching, leave a job before you get bored with it, speak to your competitors.... it was all told with a sense of humor and I should probably have taken notes for a few good quotes and a better taste of the rules themselves, but who knew? Oh, and I didn't have a pen. I have to do something about that.

Dr. Watson's account of the discovery of the structure of DNA is written in The Double Helix but since the publication of the book, letters have been found that shed more light on the relationships between the players, and Watson quoted some of these letters. They weren't quite what you'd expect from geniuses who were changing the course of science, and I suppose I forget that all stories have interpersonal dynamics and the associated banter as part of their plot.

You knew who Watson liked and who he didn't -- the stories weren't subtle, and oh, he said some things that were a bit off from the politically correct...it made for entertainment. Did he really say that? I won't repeat them, because we try to be a politically correct blog here, but you can get the flavor from the quote above.
Posted by Dinah on Thursday, January 27, 2011

Email ThisBlogThis!Share to TwitterShare to FacebookShare to Pinterest
Labels: genetics

I would have loved hearing him, and would equally love a snow day (no snow here!) from teaching school. I went to Phoenix in 2009 to see Stephen Hawking as part of the Origins symposium at ASU. The symposium was packed and fabulous, but Stephen Hawking begged off saying he was ill, and sent his daughter with a canned talk instead. I do realize he has a neuro-muscular dystrophy, but I was very disappointed.

Although, I rail at the use of the word genius.
The reason why he is so famous is that the structure of DNA is so fundamental, not that he was any brighter than others in his field. More tenacious, yes; brighter, not necessarily.

Oh, and buy a pen for goodness sake. I doubt I'll ever have the chance to hear him! :-(

JW is a YouTube star for those who haven't seen him live. Link at my name or just Google James Watson Youtube.

No rule about stealing material from colleagues or taking credit for their work, I note (Rosalind Franklin).

self promotion is a kind of genius.