Do We Need Insight? 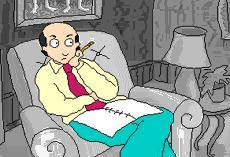 In the comment section of my post How Do You Switch Docs? readers Moviedoc and Kate have been having their own discussion ( perhaps to be called The Blog Within The Blog?) about the virtues, or lack thereof, of psychoanalytically-oriented psychotherapy. I've been staying out of it. I'm not a psychoanalyst and I've never been in psychoanalysis. My sense is that since psychoanalysis is so specialized and done by so few, and takes so much time and money, that in today's world, the contribution is more one of technique and assumptions that flavor most psychotherapies. Things like that the idea that there exists an unconscious mind, or that feelings that were part of past important relationships might surface in current relationships, including the one the patient has with the doctor. What role all this has in the treatment of mental illness seems to depend on the patient and the doctor. Some people find it very helpful to look at their lives and their illness and their problems as part of a continuum, and even those that don't, often find great solace in the therapeutic relationship. There is something so lonely about being mentally sick, and something so comforting about having someone to talk to about the pain without the judgments or fears that go into ordinary conversations.

That said, psychiatrist Richard Friedman was kind enough to talk about the role of insight in treatment today in the New York Times. I feel like he really meant to chime in with Moviedoc and Kate in our comment section, but I guess he lost his way and ended up in New York instead.
In Does Insight in Therapy Equal Happiness? Dr. Friedman writes:


Psychoanalysts and other therapists have argued for years about this question, which gets to the heart of how therapy works (when it does) to relieve psychological distress.

Theoretical debates have not settled the question, but one interesting clue about the possible relevance of insight comes from comparative studies of different types of psychotherapy — only some of which emphasize insight.

In fact, when two different types of psychotherapies have been directly compared — and there are more than 100 such studies — it has often been hard to find any differences between them.

Researchers aptly call this phenomenon the Dodo effect, referring to the Dodo bird in Lewis Carroll’s “Alice in Wonderland” who, having presided over a most whimsical race, pronounces everyone a winner.

The meaning for patients is clear. If you’re depressed, for example, you are likely to feel better whether your therapist uses a cognitive-behavioral approach, which aims to correct distorted thoughts and feelings, or an insight-oriented psychodynamic therapy.

Since the common ingredient in all therapies is not insight, but a nonspecific human bond with your therapist, it seems fair to say that insight is neither necessary nor sufficient to feeling better.

Or then there's the mutlti-faceted, uses more than one approach - psychodynamic, CBT, and for all I know some of other things as well, approach. Multidisciplinary, I guess. I'm glad he's not stuck in one, because I have some problems with one or two fine points of CBT. Most of it's fine but I just have problems a few of the details. At the same time, much of it works for me - I have a post I'll do sometime called CBT for my knees, where I have done the Triple Column Technique about worrying about when they taped up my knees in physical therapy for shifty kneecaps, and I worried about how much it hurt to take the tape off. I worried so much I was making myself nauseous, so I thought, CBT it! And, it worked splendidly, no more nausea!

Sarebear, I think the word you're looking for might be "eclectic." Dinah I tend to agree with most of what you say. Was the dodo related to the duck? I'm still not sure I understand Kate's question, but I have known some analysts who I believe could provide emotional comfort as well as any other psychotherapist. The key is not to foster dependences or isolate the "patient" from more important people, and not to confuse providing comfort with treating mental illness. Now I have to add about Friedman's article that it disturbs me that he publishes what must be an authentic case history, apparently with no disguise. Before you speculate that the patient authorized it note that the APA ethics code annotation indicates that one cannot get true freely given consent from a patient. I will be writing the NY district branch. (BTW. Last time I did this the NYDB wrote a letter to the Times. A lot of good it seems to have done.)

Moviedoc, you seem to believe that people ought to behave ethically or you will force them to. Um, I might start to like you after all.
Name witheld

What is a nonspecific human bond?

A member of my family is a psychoanalyst, very classically Freudian, and seems to think that all actions are driven either by aggressive urges or sexual urges (the latter including children). I find this very disturbing. I am sure there is more to psychoanalysis than this. I hope.

Anon: Not sure I can force anybody to be ethical, but I'll be glad if I can get them to think about what they're doing, with a little help from the animated Dr. Spork and his patient Barbara to illustrate some of the pitfalls: Psychiatric Ethics of Publishing Cases

Agreed we cannot force people to behave ethically. We do have certain means at our disposal to make it easier for people to make ethical choices, especially if they work in a profession overseen by a regulatory body of some sort. Tends not to work so well in finance, hmm, but has worked in the fields of medicine and education. If we cannot force people to behave ethically, we can encourage such behavior in others by ensuring that unethical behavior is brought to light. Remarkable how the threat of sanctions often does get people to chnage their ways. Of course, one has to be willing to be the whistlblower--a most unpleasant task but often rewarding to see the outcomes.I am willing to risk personal pain to see justice served. I am a foolish, foolish person who will die trying to make the world a less corrup place. And that is okay. Was never thinking i would live forever anyway.
Tuck not Everlasting
aka LSD

Please excuse the many typos.
LSD

That was meant to be a colon. Dang
L