How Do You Switch Docs? 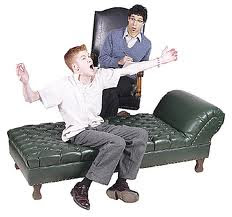 We got a very thought-provoking question:

I was wondering if you could address the issue of switching from a long standing psychiatrist (who provides regular psychotherapy - the ideal which garnered so much controversy in one of your other posts!) following a scheduled medical leave because the covering doctor seemed to be a better fit. What sorts of issues could be involved in that? I know both parties are professional, but I would still be worried about hurting one's feelings. Or what if the covering doctor did not want to continue to see the person; would that then ruin a dynamic of going back to the original doctor? How can this even be addressed?

Wow. Where do I begin.

1) In a long-standing psychotherapy, one of the issues that might be addressed is the therapeutic relationship and how that plays out as a mirror of other relationships, a process known as transference. The question of what else is going on here should be addressed. Is switching doctors a way of avoiding a problem that should be examined? Is leaving adaptive or a way of not addressing an issue.

2) Sometimes in the course of the therapeutic relationship, we forget that the goal is the treatment of psychiatric disorders and the alleviation of symptoms. Before changing doctors it would be important to take stock: why did you go to treatment? What were the symptoms and difficulties, and how are they doing now. If you're doing better, then I don't think it makes sense to leave a treatment that has been helpful because someone else is an easier person to talk to or a better fit. The goal of treatment is to get better, not to find a good friend. This isn't to say that people don't feel helped by a comfortable therapeutic relationship: they do. It is to say Take Stock first.

3) If this is an insight-oriented psychotherapy with frequent sessions, honesty demands that you at least mention the fantasy of leaving to the old doctor. If it is not that type of treatment, you may want to call the covering doctor and have a brief discussion: Will she take you on? She may feel like she's stealing patients and that may not be cool with her. She may have no openings. She will likely say to discuss it with your old doc first. Before you actually leave the first doctor, it makes sense to have a phone conversation with the new doctor, or even a single one-time appointment to discuss why you want to change, whether she will see you, and if that makes sense. Are there insurance or fee issues? Can she see you at a time you are available? Since you're someone who's needed to see a covering doc, what are her policies on emergencies?

4) If you're not getting better with your first doctor and you've followed treatment recommendations and given it a long enough period of time, then switching doctors is reasonable. If you're worried about hurting someone's feelings, then hopefully it means there has been something positive in the relationship. It may be worth taking stock with your first doctor. These are things that have been helpful. This is why I'm thinking I may want to try seeing someone else. If there's nothing positive, then leave and see someone else, even if it's not the covering doc. If there are positive things, then point them out. If the doctor's feelings are hurt, they will live (I promise). It may not, however, make sense to return to someone you've fired if things don't go so well with the second doctor, and leaving may indeed include closing a door.

Thanks for the great question and I hope that was helpful.
Posted by Dinah on Wednesday, January 12, 2011

Two heads are better than one. Professionals want what is best for the patient.
#1 If the treatment is "long standing" maybe it's not working. "Transference" doesn't apply except to analytic/dynamic methods.
#2 is key
#3 is good advice
#4 is well said.
Manage those expectations.

I find myself constantly looking for reasons to find flaws with my psychiatrist, to find reasons to leave her. I'm pretty sure I know the reason, or at least the main one; I was hit by my mother as a tween and teenager, and so I expect to be hurt by female authority figures; I'm in a constant state of wanting to protect myself.

This may not be the ideal situation to be in as a patient but it's not like I was swimming in choices for psychiatrists, and besides it's likely good for me in some psychological way to try and deal with this. It's just, she's never addressed the issue, although as part of the very comprehensive history I filled out, on the major life events timeline, being hit by my mother was on there. Big red flag about female figure issues, I would think it would be obvious, but maybe it's not.

My fear of her is going to come up next appt. anyway since another side effect I've identified is enormous amounts of anxiety. At the moment, I'm afraid of just about anything, everything. Will I even hit post on this comment?

Then again, I was afraid of her before the anxieties from this med became an issue; too afraid to even mention it. I was hoping she'd be astute enough to pick up on my history, but I see now that I need to just outright say, "I'm afraid of you in part because my mom used to hit me." and just get it out there.

So this post has helped me bring my thoughts together on this. Thanks for puttin' up with me, again.

Interesting post. I have a few thoughts. What does seeing a covering doctor mean - is it possible that in some cases, it might be arranged that the patient was regularly seeing the covering dr (weekly, etc) during a medical leave? I have a friend who did that with a maternity leave therapist for a few months, I think.

I guess my question for the poster would be what does a better fit mean. I'm probably projecting my own experiences onto this but I would have thought a better fit might mean not just more comfortable, end sentence - but more comfortable talking, listening, thinking about what's being said. Or, what if the second doctor is more knowledgeable, has a stronger arsenal of medical knowledge, or different theoretical orientation, etc. If the treatment is longstanding, it makes me wonder if the patient knew there were other sorts of treatment modalities even available. We all know it can be easy to be trapped into the familiar - especially if you're a patient.

I agree with movie doc's point - If the treatment is long standing, it might not be working. If the poster is worried about hurting the drs feelings, that might be a factor in keeping the treatment "long stnading" when maybe it shouldn't have been. Of course there could be other reasons, too.

Dinah and moviedoc (would like both your views!) - can transference really only apply in analytic/dynamic methods? (not asking as a sarcastic question, a genuine one.)

This is a great topic! I liked my last pdoc as a person but thought he would not accept me because of his fundamentalist religious views. (I never saw any evidence of this but nevertheless felt I could not be fully open with him about my sexuality, for example.) I couldn't bring myself to tell him I was changing doctors as I knew he was very sensitive and would be hurt, so I just told him I was taking a break from therapy and never went back.

To mean fit means chemistry. To expand on the idea of treatment that "isn't working," if the psychiatrist doesn't see sufficient movement, he should suggest the patient consider pursuing treatment elsewhere.
Transference is a term of art based on psychoanalytic theory and assumptions about modernist notions like the unconscious. It is too often used as short hand (psychobabble) for how the patient feels toward the psychotherapist. At behavenet.com you will find the term in glossaries of Gestalt and Jungian psychotherapy, but not others. Sometimes a feeling is just a feeling.

Sarebear said...
This comment has been removed by the author.
January 14, 2011

Sarebear said...
This comment has been removed by the author.
January 14, 2011

Is it possible that a psychoanalytic based doctor might feel that the lack of movement, to take your turn, is just part of the process? what happens when the patient is pretty sure that it's just not movement - that there being no movement is no more or less then being no movement. Yet psychoanalytic based theory dictates that as part of the process, no? And, that by definition, the patient won't be accurate if they feel there's no movement....

Very possible that a psychoanalyst would interpret almost anything as an indication for more treatment, Kate. That's one reason I reject psychoanalytic theory.

Kate: Your two sentences don't seem to match, but the second one is very interesting: I don't believe psychoanalysis really treats anything, but if during a course of analysis you wanted to try CBT for panic disorder, I see no reason you should have to stop the analysis. Come to think of it a psychoanalyst, Ivan Rohr, trained me to do biofeedback. He told me he occasionally used it with colleagues' analysands who seemed to be stuck. Go figure.

I think what I was trying to say is it is possible for there to be no indication for psychoanalytic/dynamic based treatment, while there is indication for other treatment. i guess not believing in the former as an effective treatment answers that question! :)

fyi, wasn't talking about analysis, but about psychoanlytic-based treatment (eg psychoanalyst providing 1x wk treatment, etc). also not talking about something as clear cut as panic disorder, but th ever murky severe depression.

Perhaps the murkier the disorder, the more amenable to an analytic approach. But I would not equate severe with murky, and severe usually demands aggressive intervention which usually means a biological approach: meds or brain stimulation like ECT, often in hosp.

I hear that. But what about the point after the aggressive medical approach, whether post hospital or ECT or not, if that wasn't quite needed - or rather, the continued, I guess, assuming continued compliance with medication - where it seems something more is needed then pure medication maintenance? i think the treatment options there seem to become murkier. If the depression is responding to medications, what role does psychoanalyticaly-informed treatment have - seems clear there's a major, primary medical component - especially if there seems to be no other "movement." Does that make sense?

I sure wish I could leave my psychiatrist. If I ever become more sure of my medicaid (it's unsure right now for complicated reasons) or ever get insurance I'll leave her the second I can.