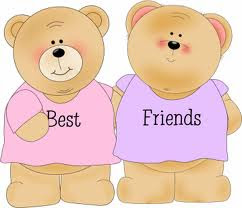 Here's an interesting article I came across about the role of genetics in friendships. Two researchers studied genetics found in social networks. They asked people in two longitudinal studies to name their friends, then they compared certain genetic markers. They found that the DRD2 gene, which is associated with alcoholism, tends to cluster among friends. In other words, DRD2 positive people tend to be friends with other DRD2 people. Conversely, the CYP2A6 gene carriers tended to make friends with CYP2A6 negative people. This gene is associated with people who have open personality styles. In other words, a tendency to seek out variety and new ideas.

I'm not sure what to make of all this except to say I think it's interesting that there may be a biologically driven reason why Dinah and I are friends. In many ways we're the exact opposite. Dinah is a whirling dervish of multi-tasking in a way that I find exhausting, yet she seems to thrive on it. I'm an obsessionally detail-oriented and data-driven person who never loses her car keys (or drowns a cell phone). I enjoy living this way but have no doubt that Dinah would go mad from boredom within hours if we ever woke up and found our lives had been switched. I can guess which one of us has the CYP2A6 gene. The scientists would say that we are friends because we have complimentary genetics---traits that balance off and help one another. And I guess that's true. Our book might not ever have been finished if Dinah hadn't kept us moving and on task. And it wouldn't have been as organized and readable if I hadn't followed up with the editing. So it all works out in the end.

Now we just need to find a gene that protects against cell phone loss.

Posted by ClinkShrink on Tuesday, January 18, 2011

Wow. Great idea. Is there some gene that explains why you put up a great post (minus graphic) and I come along and put up a pic to go with it?

You always say I have all this energy. But you're the one who gets up hours earlier than I do, has a bunch of projects going on (yes, most of them detail-oriented) and then goes to the gym at night. At night. After a day of work. I'd die. Up at 7, down at 11:30, work out in the morning or not at all. And half my whirling dervish plans are lunch or coffee, or 'meetings' which accomplish who knows what.

You are so funny, Dinah. If I ever needed a psychiatrist, I would want it to be you or someone a lot like you.

that wasn't me. although, if it flatters dinah and makes clinkshrink think i'm sweet for saying it, i should claim it, no? alas, i'm stupid. there is happiness for stupid people, though, right?

The two of you are friends because of some mutual respect. We can be attracted to all sorts of people, maybe because of genes, become friends with them and be perfectly miserable because of lack of respect.
Ultimately it is how you treat your friends that will determine whether you are meant to stay friends. Too often we approach what looks good and get a surprise punch in the gut.Maybe that is explained by genes too.

how did LSD get so wise? what kind of owl is s/he? i, personally, like shriek owls. i like their ears and i like their cries.

I have small ears and cries that no one can hear. Shriek (screech) owls, hmm, they are a dime a dozen. But if you care to see one in action, drop round my place just before dinner when everyone is comletely stresed out and not yet liquored/sugared up.