Variations in Response to Stress-- from the NYTimes. 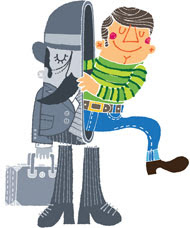 In "Down and Out-- or Up" New York Times write Benedict Carey (he likes to write about psych stuff) discusses suicide, psychological distress, and resilience in the face of the crashing economy. Carey writes:
----- Just as loss itself comes in different flavors, from the bittersweetness of divorce to the acid tang of public condemnation, so too do people’s responses to loss differ, sometimes wildly. There are people who fall hard and do not find their feet for a long time, if ever — a condition some psychiatrists call complicated grief. And the depth of this economic collapse has unceremoniously stripped thousands of far more than money: reputations have reversed; friendships have turned sour; families have fractured.
------
I agree-- some people grieve and move on quickly, others never go back to who they once were (even with therapy and anti-depressants). I wouldn't have put it, though, that they do not find their feet, I would have said they find different feet. They become a little of someone else, often someone who isn't quite so motivated to work or travel or run in the rat race as the person they were before, but someone who might eventually find a new and quieter life. It is as if their values and goals change. Sometimes, it seems, that's just the way it is.

Carey goes on to write:

--- In any group of people, moreover, there will be a handful who are exceptional, who find some release or hidden opportunity in a seemingly devastating loss — a kind of Zorba response. In one study in England, psychologists found a bricklayer who, after being paralyzed, became an academic and now says the injury was the best thing that ever happened to him. Other research has recorded significant improvements in the lives of some people after they lose a loved one.
---

Thanks, Dinah, for posting that. Responses to stress are really interesting. It's also important for people to know that not only is it not required that people collapse in the face of adversity, but that most people pull through without major hits to happiness. In fact, their approach to the situation may shape it for the better. The graphics on the NYT article are interesting.

After our mother died, I retreated to my couch. I watched CourTV and QVC (home shopping). Yes, I bought a few things, but I kept it on so I could always hear a cheerful voice talking. I slept a lot, as well.

My sister took Salsa and Belly Dancing lessons and was out every night either working or going to bars/restaurants or class. She was a blurr of energy.

Together, along with our father, we availed ourselves of the bereavement group (6 weeks) at the funeral home, and the facilitator said either response was normal. It reassured me, but I still wish I had reacted like sis.

Oh, she also lost 40 pounds. She looked GREAT even though grief made her throw up. Me? Well, I didn't weigh myself, but I can definitely say that I didn't lose weight!

Now, when I am stressed, I shake like a leaf. I also experience headaches, racing thoughts, stomach aches and diarrhea.

Both sisters have had Shingles flare ups. One sister gets migraines.

One's body has an almost limitless array of methods for signaling its distress. If we only knew how to listen...

I'm glad you wrote about "different feet." So true. It seems that the general perception of psychological resilience is basically "lots of resilience--that's good people be that" and "not a lot of resilience--why do you get down? stop getting down."

I would define it more like: "Someone whose experiences really emotionally shape them" and "Someone whose experiences don't really shape them" and all the way in between. There's also a spectrum of immediate responses, ranging from "I'm sad, so I'll just keep going forward as fast as possible" to "I'm sad and I can hardly move. I want to stay and be with this for a while." Any reaction can result in any number of outcomes. It's all about dealing with whatever comes, and neither thinking of oneself as "weepy, angsty and pathetic" nor "cold, unfeeling, avoidant."