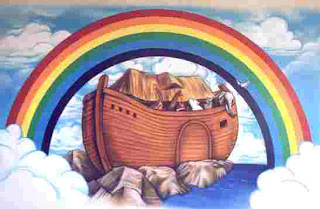 One of our readers asked me to comment on how psychiatrists who work in corrections keep from becoming 'hardened' to their patients when so many of them are 'lying jerks' (anonymous reader's words, not mine).

The question was weirdly relevant this week.

I came back from a week off to find that our entire department was flooded. A three inch pipe (clean water, fortunately) broke over the weekend and left a five inch layer of water over our entire floor. It leaked from the third floor tier all the way through to the first floor entrance. I don't even want to think about how many gallons that was.

The water had been vacuumed by the time I came in but the smell hit me immediately. There are no words to describe this. Employees came in, took a sniff, and immediately turned around to leave. I had no idea carpets and paper could mildew so fast.

So back to Anonymous's question: How do you keep from becoming hardened?

The short answer is: It's demoralization you have to watch out for, not insensitivity.

Psychiatrists become psychiatrists because they like their patients, and generally I do. Every psychiatrist has an occasional patient who conceals information, is deceptive or sometimes unpleasant. This goes with the territory and isn't limited to forensic work. It's part of being human and most human beings don't reveal everything about themselves immediately, or at least not the unseemly bits. I don't take patient deception personally. It's part of the job. It's possible to lose one's naivety without becoming jaded or cynical.

The real challenge can be to keep up your morale (or at least not undermine your co-workers' morale) in the face of repeated broken pipes and flooded offices, uncontrolled air conditioning (or no heat), disappearing resources and quality assurance administrators who believe a new form is the answer to every problem. Demoralization is the death by a thousand cuts, more subtle and deadly than any nasty cursing sociopath.

My advice to the 'new fish' in the field is to be careful who you associate with and listen to. It may be nice to have a co-worker to vent to, but if all the two of you are doing is venting then there's a problem. Disgruntlement is contagious and the more you listen the more it feeds. Find the cheerful co-worker (there always is one, the polly anna who sees a broken pipe as a chance to clean out the office) and hang out with that person once in a while. Take a break and spend some time planning your next vacation. Hug someone you care about. Kiss your dog. If I were Dinah, I'd eat a hot fudge sundae. (Oh wait, I do that anyway.) Know that this aggravation, too, will pass. Then aggravation will happen again. Then pass. Then...well...you get it. Eventually you, the new fish, will be advising others how not to become 'hardened'.

And now I finally get that chance to go clean out my office...
Posted by ClinkShrink on Tuesday, January 06, 2009

This is actually good advice for any doctor. Thanks.

Clink’s advice to “new fish” and who you hang out with at work is universal, no matter what the field. The contagion of venting can rapidly lead to a toxic office as I have discovered. I’ll take a polly anna over a venter any day.