In case you haven't already seen it, be sure to check out our clicky iPhone Grand Rounds! 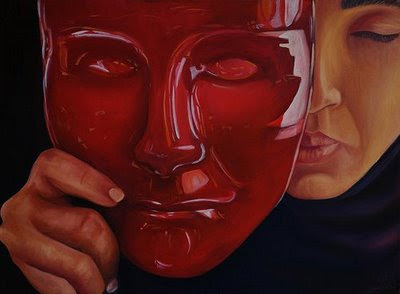 It was years ago.  I was a resident on an inpatient unit and the patient was floridly manic.  I don't remember the details, what I do remember was that she was running on empty, high as a kite, going 99 revolutions per minute, you name the cliche.  There was a reason why she was on an inpatient unit and not being seen by an out patient doc.  She wasn't getting better and, as is often the case with people suffering from mania, she had no insight that she was ill, she was feeling good-- really good-- and oh so energetic, and even louder than that, and so what's the problem here? Let me outta this joint!  We're talking, I'm trying to reason with her, and finally, she screams at me in a way that stays clear long after her name and the details of her life have oozed from my memory,  "You're problem is you're not Italian!  You don't understand TRUE EMOTION!!"  She had a point.
I'm not Italian, by the way.  And who defines what emotional response is true, what is valid, what is right to have?
So once patients get the label of Bipolar Disorder, they come under an added scrutiny that makes them, and those who know they suffer from this disorder, subject to both added analysis of their reactions.  It often leaves them feeling invalidated, or questioning themselves in a way that adds an entirely new dimension, if not burden, to life.  I can have a feeling--- it's just my feeling.  I may question if it's valid for me to have that feeling-- come on, we all check out our feelings.  How often do you ask Was it Him or Me?  Or comment that everyone thinks he's a jerk, just to be sure you're not the one being overly sensitive.  People with Bipolar Disorder take this a bit farther.  If they're angry, irritable, have a great idea, in a good mood, in a bad mood, have trouble sleeping...and the list goes on....then they're ill.  No bad hair days for the labeled labile.  They, and everyone around them, are constantly questioning their sanity.
There are other labels, though, and they aren't all about mental illness.  Perhaps you're a worrier, you want people to be considerate of the fact that you care about them, but they don't like to check in (--this particular example is for us moms).  Maybe they check in so you won't worry, or maybe they label you Neurotic, or Over-protective, or something that lets them blame you for your concern, that frees them from responsibility.  Or maybe you're very sensitive-- a trait that can be a very positive thing, especially if you're sensitive to the needs of others.  But once you're labeled as such, then the someone who says something that upsets you isn't held so accountable.  No biggie that I made Georgie cry, he's too sensitive, you know.
Emotions are a funny thing.  Sometimes I wish they could just be what they are and taken for face value.  And even if I'm not Italian, let it be known on the record that I'll eat pasta and gelato with glee and enthusiasm.
Posted by Dinah on Saturday, June 28, 2008

Despite not being bipolar, I still relate to your example. I know that I have emotional responses to things that are based on skewed perceptions and are most always out of proportion to what the cause might merit.

Yet I find that not only do I have to hold on to feelings lest they be off base, but I also have to constantly monitor my thoughts in case they end up being negative, skewed, based on false assumptions, or even if they just look at me funny.

Granted it's true that both my emotions and thoughts are skewed but once the seed of doubt is planted how the hell do you keep it from stop it?

I met with a brand new therapist recently and I could tell he was directing the session, and thus future sessions, towards a CBT approach, I tried bringing this up. I'm not sure he understood what the hell I was trying to tell him. I'm returning him to the pound next week.

It was once thought I was bipolar but my psychiatrist who I have seen for over a year disagrees. Still my friends are hung-up on the original diagnosis. Occasionally I will be excited about something or in a hurry to rush off somewhere and I will immediately get jumped on by my friends for "talking fast". I find this VERY annoying. I listen to the general public for speed of delivery of words and people I assume to be normal will speak rapidly from time to time. My friends worry when I do though, and then start urging me to slow down as though a real mania (if I were in it) would go away just by slowing the speed of my speech.

Okay so your grandmother called biscotti by a different name. You got the cookie, you got the high EE in the genes, you might as well be Italian. Go have a slice.

What a great post. Two pdocs have given me the label "bipolar", but the one I see every week says I have MDD and a hyperthymic temperment. This I believe, but I can't help but worry everytime my mood skyrockets. I am so scared I am going to go manic.

Even before someone tried to label me my friends would make fun of the hyper energy I have when I am well; my million ideas, my rapid speech, how loud I get (very loud...because I get so excited with all the ideas), how excited I get, how wild I get.

I almost bought into the labels until I went to my Great Uncle's funeral and met my Grandma's side of the family...every single one of them was like that...So "On" it was absolutely amazing. It was like being in a room with twenty people just like the well me.

We weren't Italian, and certainly, statistically, we cannot all have been manic at the same time: we just are a family of people whose personalities are exhuberant, jovial, high, full of ideas, like to do a million projects at once, can fly from one idea to another and understand the connections between all these ideas with ease. Maybe everyone else was just "slow"?

The experience of being surrounded by so many people just like me was breathtaking and eye opening.

When do people ever let you off the hook? Do I ever get to be "blue" again without someone sounding the alarms? Can I have a crankypants day without my mother asking me if I took my meds? As if not taking your meds one day would make a damn bit of difference (since it takes almost 3 fu#king weeks to kick in). Will I ever get to do something stupid and let the reason for it be "just because I was stupid" and not because I'm bipolar?

I once said something to my therapist about feeling something about her and I commented "How inappropriate." She said "No feelings are inappropriate. It's about what you do with it and whether you act on it."

I thought that was a pretty sensible perspective... it enables you not to invalidate yourself but also not to endorse yourself to do whatever you feel like...

What a fantastic post. I have a niece who is both borderline and bipolar. But...before she was either of those she was vivacious, passionate, caring, energetic,young and excited about life.

Her illness seemed to come on fast, and without going into the horrible details, it came on strong.

But under those diagnoses? She is still all those wonderful things.

I think about feelings often. I wonder sometimes (alright...all the time) if I will ever have a feeling and know what it is...at the same time would be good, too. However, that is a different issue!

My best friend is bipolar and I often hear from her that such and such is "because of being bipolar"...this makes me sad. I believe that a lot of her "moods" is simply being human. Yes, she is bipolar, but that is not the sole explanation for having rough/depressed mornings...I'm pretty sure that waking up this past Christmas eve and finding her husband had passed away in the living room while she slept, has a lot to do with that...and is completely "normal". I also believe that feeling an upsurge in mood right after hearing her toddler granddaughter say "gramma" for the first time is completely "normal" too!

I'm bipolar and I frequent bipolar websites. Sometimes the fur starts flying and then people start asking who's well and who's ill. It seems you can't win. If people think you've got heated about something because you're ill, you're resented for playing the ill card, but if people think you're not ill, you'll find that suddenly whoever is on the other side gets the sympathy vote. All terribly messy.

And if mascarpone, mozzarella and risotto consumption is anything to go by...I'm Italian through and throuh.

I felt for certain that someone was going to challenge my comment above. Now I'm disappointed...

Having bipolar this hit home with me. I am doing well right now, but every time I start to get weepy, or irritable, or over-emotional I get worried. Just the other day I had an interview and was really nervous and the way it came out my friend asked if I was manic. I'll be asked constantly if I'm taking my meds when things go wrong. Recently I've been the classical bipolar person who believes she isn't bipolar because she feels good, therefore, she doesn't need meds. It was a misdiagnosis. Or I was just immature. Or it was a result of PTSD. Whatever. I can rationalize anything away. But people have to remember I'm not bipolar, I have bipolar.