Schizophrenia, Still Figuring it Out 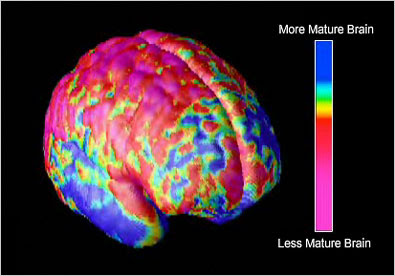 New York Times reporter Benedict Carey likes to write about mental health issues. Today, he talks about the diverse presentation of schizophrenia, as well as variations patients have with regard to treatment response. Carey writes:

The findings confirmed in a rigorous way what psychiatrists who work in the trenches know from experience: Many patients bounce from medication to medication for years. Some find a drug they can live with; others do not and choose not to take drugs at all.

Psychosis can be miserable — and it says something when people prefer its twisted torments to being on a medication.

The shortcomings of the drugs, in turn, cast doubt on one working theory of the biology behind schizophrenia. The drugs act on the brain by numbing cells to a brain chemical called dopamine, which was thought to be overactive for some reason in people with schizophrenia. Most researchers now regard this so-called “dopamine hypothesis” as simplistic at best.

He goes on to say that, according to European studies,with the right support, there are patients with schizophrenia who can be maintained for years without medications. Wouldn't it be nice if we knew exactly which patients they were?
Posted by Dinah on Sunday, June 15, 2008

Email ThisBlogThis!Share to TwitterShare to FacebookShare to Pinterest
Labels: schizophrenia

Hm... do you three shrinks think that the coming of fMRI will help to answer questions like this? Not just about the biology of these diseases (although that would be helpful), but to help determine which patients (for any psychiatric disease) are likely to do best on which meds or likely to do ok on psychotherapy alone, etc?

I know it's not an easy question, so if you don't feel like answering it, I'll understand. :)

Schizophrenia is a great deal like going to graduate school, or medical school. The more you learn about an incredibly complicated topic serves (hopefully) to underscore the overwhelming body of information that lies beneath the tip of the iceberg.

How do we tell who will respond best to Tx.? We do know that early identification and Tx. can lead to a good prognosis, but only in some cases. We know a predominance of negative symptoms is a poor prognostic indicator, as is one or more parents with the disease, and so isearlier onset, perhaps suggesting less genetic resilience to the disease.

Regarding who could live a quality life for an extended period of time without psychotropics, I'm willing to bet it's the people who are provided with the most comprehensive (and SOCIALLY based) care. By this, I mean access to broad-based, integrated health-care. Provision of in-depth psycho-education to the patient and family would be ideal, as would ready access to psychosocial programs, such as those fashioned after the"clubhouse" model. Such program provide peer support, a structured environment, and training and access to employment opportunities.

Allow me to dream for a moment. Their are cultures that do not stigmatize psychosis in the manner that Western society typically does. In these cultures, the individual is not shunned, or placed in an environment of isolation. This can have a profound effect on the individual’s experience of his/her psychotic break, and promote healthier and more effective reintegration into society.

I've always viewed people as composed of different, interconnected needs; emotional, social, physical, intellectual, and spiritual. In Schizophrenia, if we accept only symptom reduction as a goal, we fail the patient. If we believe only medicine can produce a desire effect, we are simply naïve. If we embrace, rather than shun; normalize rather than stigmatize, and formulate treatment that addresses all facets of the human experience, we are bound to have better outcomes.

http://psychrights.org/Research/
Schizophrenia
(a selection of articles)

I wonder what all the Freudian theorists and therapists would think about the hideous progression of degeneration visible in those MRI scans.

The model of Id, Ego, Superego etc may have it's uses. But it's difficult to view much of past psychiatric theory as much better than superstition - on a par with trying to make rain by propotiating the right deities, as opposed to cloud-seeding.

To be fair, the witch-doctors and priests were using their sometimes formidable intellects to try to make sense of the world in a rational way. They just lacked 99.9% of the data they needed, so their explanations were less than accurate.

I think much of psychiatry is the same: it's not that they're stupid, merely pardonably ignorant. But they're getting better as more data comes in. It does mean though that conventional psychic explanations should be viewed in a less accepting light, and that to view the mind as being separate from the brain is less useful than commonly accepted.

Will Psychiatry rise to the challenge of accepting that most Psychiatric theory is the sheerest nonsense, an artefact of speculation, guesswork, and poorly designed experimentation? As a whole, I think it will, Shrinks are *bright* people in general. I expect there to be many holdouts though.

I am no Psychiatrist but just from little Pharma I know.IS it not possible to lower the dose of a drug consistently if no new psychotic sign are developing and patient is doing better and then go to such low doses where the psychotic medication is being given theoretically but is more acting like ...just say an anti anxiety medication or even sleep medication.
I am thinking of low dose serequel here.
I am sorry for being in a hurry here so will not be able to search and link the articles here but I have seen articles where low dose serequel was used for its anti anxiety componant rather than as an anti psychotic.
And then ofcourse stop the drug altogther after tapering it.
As I said ...no practical experience here, so do not know if it is an impossible idea.

What an awesome article! Thanks for sharing- it's nice to see that those in the psychiatry field can be mature enough to admit that their old models are overly simplistic and therefore somewhat faulty. I could say a bit more about how medical education simplifies the disease of schizophrenia to the point of ridiculousness (basically by presenting the disease as a problem in dopamine systems and leaving it as established fact) but I'd need another few pages.

This brings to question a very essential thing about psychiatry- can it function the same way that other medical specialties do, lacking the concreteness of other disciplines but with evidence that psychiatric treatment can benefit patients that would otherwise be completely dysfunctional?

"Wouldn't it be nice if we knew exactly which patients they were?"


How pathetic! You're supposed to be professionals, and you seriously pretend you haven't heard of "Open Dialogue" in Finland?? Jaakko Seikkula?? Though, the "patients" aren't "maintained". They recover. Fully, most of them. Just like I did, without popping as much as one single pill. :D Oh and, btw, you don't even have to go all the way to Finland. You had it right under your nose: Soteria, Loren Mosher. Does it ring a bell??

Well well. I just came by. By accident. Won't happen again. Happy "figuring it out"! LMAO.

If we are (ontologically speaking) nothing beyond the material realm, than of logical extension, this "thing" we call schizophrenia has its basis in the brain matter or chemicals or some system... in one form or another. Personally knowing someone (very dear and close to me) with schizophrenia, their delusions which are auditory and visual seem to be presented to the mind in the "exact" same way as we view reality. In other words, when we perceive some object before our eyes like a glass of water, one theory of perception says that the image presented to our minds is grounded in a causal connection or correspondence to the reality of there existing a glass of water.

The problem with one with schizophrenia is they see the "exact" same image as we would see (minus the causal connection or correspondence to reality) ergo trying to convince them that it is an illusion is nearly impossible since their illusion is no different than the real thing.

This is the best theory of perception and epistemology that can explain what a schizophrenic person experiences without actually having the condition yourself. In my humble opinion...I know this might be tough to follow but then again, discussing the mind is not an easy thing unless one is trained in this area and comfortable with the terminology and taxonomy. Yet I am assuming that there are many psychiatrist, psychologists, and maybe a few philosophers on this sight that won't take offense to the vocabulary used in this post; and if there is anyone reading this and doesn't understand it, please don't feel slighted.

I do love that last sentence.
I fear I am not one of them though.