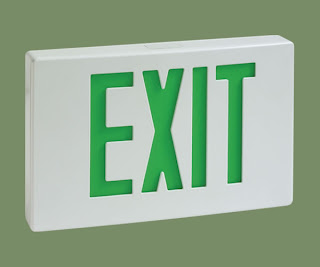 As I was leaving prison today I noticed a man standing on the corner. He was wearing nice pants and a dress shirt. He had a knapsack thrown over one shoulder and was wearing sunglasses while talking on a cell phone. I didn't think anything of it until he looked over and saw me and yelled, "Doc! Hey doc! Remember me? You helped me, you really did. I'd hug you but I know that wouldn't be appropriate."

Frankly, I didn't recognize him at first. I knew who he was after he called my name, but just to see him standing there, well, the context was quite different and he looked very very different from his appearance in prison.

Anyway, he was doing great. He had a place to live, a job, was going to AA regularly, staying clean. He was waiting for his ride to pick him up for AA. His phone rang and he picked it up. "It's my ride," he said. He told his ride: "Hey, guess what? I'm standing here with the doc who saved my life!" His ride pulled up, and the driver immediately started waving and hollering at me too. My patient said, "You remember him? You saved his life too." I had seen the driver maybe twice, just a few days after he had been arrested. I remembered him, remembered that he had never been in trouble before, was facing serious charges and was pretty upset. Then the driver quoted to me, word for word, something I had said to him four years before that had helped him get through incarceration.

As they were driving off they pointed to me and said, "You keep doing what you're doing. You keep helping people."

I don't have any trouble admitting that I choked up a bit and by the time I got back to my car I was in tears.

You see, today was my last day as a fulltime prison doc. After about fifteen years I've decided that for my own sanity I'd need to cut back to part time and go back to doing another job I've always enjoyed doing (more about that later). This was quite the experience to have as I'm going, literally, out the door. It's the experience I'll remember the next time I hear someone knocking docs who do med checks instead of psychotherapy, or saying that prison doesn't help anybody.

It's good to remember that sometimes there are happy endings.

So what was the phrase the driver quoted back to you?

Moments like that are what you dream of, but dare not expect when providing therapy. What a fabulous and fulfulling experience to close out this part of your career.

you obviously made an impact on them and it's great that they were able to share that with you---i imagine most of the time you just have to hope for the best. a nice last day. i'm interested to hear what your new venture is.

Did you enjoy being a prison doc? I have been the medical director of an approximately 1000 inmate jail for the past 4 years or so and I am counting the minutes until my contract is up. I have had a few inmates who seemed to genuinely benefit from and appreciate my services as an internist but most have just wanted to complain and berate my care. They assume just because you choose to try to help them in the correctional setting that you are too incompetent to get a job somewhere else. Kudos to you doc! I'm glad you had a good experience!

How wonderful! I would expect that a difficult population like that would have a hard time expressing thanks for what you have done, so it's especially meaningful and represents many more unspoken "thank you"s..

If you're good, and lucky, you get to make a difference.
If you're very lucky you get to know that you did.

I'm glad that you realise that all the rubbish you've had to take in the course of your career was worthwhile. Even if you did no other good, helped no-one else, you've still justified your existence on the planet.

That is a good feeling. Congratulations, and I hope you get even more of the recognition you deserve.

Thanks everybody. The phrase he quoted was: "It gets better from here." He had just been arrested and had mentally thrown the rest of his life away, and couldn't imagine a future.

Junk: Being a prison doc has been the best job I've ever had. (That's sounds pretty pitiful, I know!) You described the experience well. A patient could bless you in the morning clinic and another curses you in the afternoon. I took it for granted that none of them were going to trust me and I sort of enjoyed the challenge of winning them over to my side. And you're right about the "presumption of incompetence". (If an inmate really liked me he'd give me the prison compliment: "You're too good to be working in prison.") The only annoying thing about the presumption of incompetence is when you hear it from colleagues in free society (assumptions that if someone is in jail they'll automatically get lousy or no care). One of the reasons I blog is hopefully to change that misconception.

It's wonderful that happened on the day you were leaving. You'll never forget that you made a difference.

I worked in a prison for 5 years, loved it, managed to help at least one homicide suspect turn into a law abiding citizen, but after 5 years I had had it. I can only say, good for you and good luck with whatever comes up next.

What a beautiful story. I know my pdoc has saved my life. I bet there are many other patients of yours who's lives were blessed by your help. I am glad you got to hear from a couple of them.

That must have been a great experience Clink. Can you tell us what your words of inspiration were?

1) "Somewhere you got the message 'not to be.' (On suicidality, first shrink, Dr. VC) also, 2) "You may not ever to get rid of the suicidal thoughts, but you can learn to turn the volume DOWN."

3) (Upon calling resident shrink because I wanted to kill myself) "Did anything happen today?"

He said that over and over, every call. Even though he isn't my doc anymore, whenever I feel that bad, I stop and ask myself "Did anything happen today?"

I'm glad you had such a good last day as a fulltime clink shrink. I'm super curious as to what it is you're going to be doing in your "spare" time.

Don't be so touchy about the whole med check thing. You're my favorite nun and I had a great time out with you and Roy and sidekick the other night.

I'm glad you mentioned your successes were heading off to AA.

.......Nope. Phrase didn't work. Anonymous' phrases didn't help either. And here I was hoping for some free therapy.

Jonathan Schnapp - I have no stock phrase for you.

But you have more farnarckling TALENT in your left pinkie than I have in my whole body.

Can I be selfish and ask you to please remain with us? I like having you around, the world is a better place for you being in it.

Now how can I make your life easier, for giving birth to such ART must be painful. And it's only fair that if I ask you to stay, I try to make things better.

gadji beri bimba and all that jazz.

Thanks, Zoe, for the kind words.

Don't worry about me, though. I may be depressed but I'm not going anywhere.

Wonderful, Clink. IMHO, some phrases are like seeds, they don't look like much when you plant them, but they can unfold in ways we never expect.

I was a teacher for some years, and often doubted whether the fragments I spouted each class were really worth much to my students, though they were courteous and kept coming back so maybe that indicated something (not a problem you would have had, clinkshrink).

After seven years of doing this, I had my first ex-student rush up to me and thank me for classes which I had (along with her) pretty much forgotten. She was warmly grateful, and this incident gave rise to what I call my seven year rule: "You won't know for sure till after 7 years."

Or sometimes quicker. But don't count on it.

You had tears? Yeah, I had a couple too, reading your story.

Sometimes the timing of random events can just take your breath away. As you make your decision for change in your life, you get presented with true validation of the difference you've made to the lives of others. What a fabulous and well-deserved moment.
HP

Congratulations!!! 15 years is an amazing time to stick with such a challenging job.

That's so great that you got such nice feedback on your last day there! I enjoy reading your posts, and am thinking of doing a stint as a clink psychologist if I get the chance.

I am a clinical psychologist specialist working in the field of eating disorders in private practice. As much as i try to not get too personally attached to my patients outcome sometimes you get these magic moments that make it all seem worth it.
Last week on one day I was able to discharge 3 patient from my care all doing really well. One had 18 sessions, one I saw for a year, and one for 8 years. It was one of those days where you know that you have made a difference to peoples lives.
Also just to say I love the podcast. Helps me begin to understand how my psychiatrist colleagues think.
cheers.