The Meeting I Didn't Get To 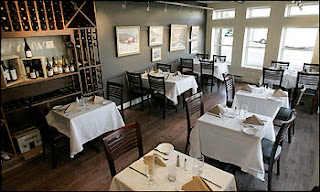 Tonight I learned that King George died when my friend Bruce was in kindergarten. Bruce and I learned lots of other things about each other as well. He was geeky kid, eats more than anyone he knows, and still has trouble sitting still. I wondered why someone who can't sit still would become a psychiatrist.

So once a year the shrinks sponsor an event to schmooze with the state legislators-- just a way to get acquainted, and we'd like our representatives to deal with relevant proposed legislation in a manner that helps mental health causes. It's a political action kind of thing, cocktails, appetizers, not much more. Last year I didn't go because of the lousy weather.

Last year I was a little smarter. This year, I set out in a car with Bruce, my friend, my driver for the night, and we had already called one doc who'd been sitting in traffic for hours. Still, we went. Election Day. The roads are a mess. We set out at 5:20....without traffic or ice, it's a 50 minute drive. We sat. We talked. We changed routes. We never got out of traffic. This was the perhaps the longest worst traffic of my life? It's midnight, and since 9 this morning I've been in a n outfit that constricts my breathing.

Okay, at 9:10 pm, we surrendered to gridlock, sitting with the engine off, the bump from behind of the car that slid into us, the calls to check in with other shrinks in gridlock. The first sight of food and we texted our Surrender, then pulled into Paul's Cafe. They'd stopped seating 10 minutes ago.

So here's my plug for Paul's Cafe-- they listened to my quick whine about 3 and a half hours in traffic (I tried hard to look pathetic), offered us any table, great service, delicious stuffed shrimp, a fine glass of wine. A Five-Star Shrink Rap review and we two shrinks even talked about the blog and podcast, even if Bruce is not a blogger, or even a wannabe blogger.

I didn't make the reception. I didn't make it to the meeting that followed. I did learn that the death of King George impacted a kindergarten child in the Bronx.

It could have been a lot worse.
Posted by Dinah on Tuesday, February 12, 2008

Email ThisBlogThis!Share to TwitterShare to FacebookShare to Pinterest
Labels: dinahrants

That's brutal. Totally and completely. Thankfully where I live it is basically impossible to get stuck in traffic like that.

On the subject of sitting still, I can't. That's why I'm a social worker not a psychologist. I work with SPMI, but in the community, and I don't have to do nearly as much sitting still. More walking in blizzards, but less sitting still.