In Treatment: Episode 9.....the sub-blog 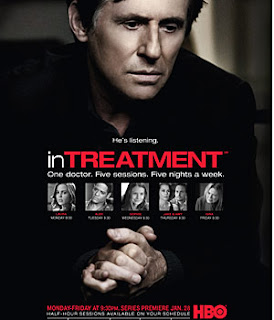 The happy couple is back. Jake and Amy are now the epitome of marital bliss, Amy's decided to maybe keep the baby, all is well with the world. They are done with therapy. "It's not so black and white," Paul says they still need therapy. "I just want to think about it and I will make a decision soon."

Amy jumps up mid-sentence and runs into that all-too-used bathroom. Jake wisks her off and Paul sees a spot of blood on the couch. He beckons Kate, he needs to know how to get the blood out of the couch. Kate takes care of it. Why don't I have a wife in the next room to deal with every mess in my life?

"Are you sure that's not going to stain? You have no idea how sensitive some of my patients can be." She offers to clean up for him, he's a creep to her. "I don't hate this room," Kate says, "I'm still jealous of it." They fight. He's tired, that's all, it's no big deal. Paul confesses that he went back to see Gina. "I thought she despised that woman...after all that stuff she wrote about you." It's amazing how many different things they can fight about within a matter of moments. They've moved on to the misery of their youngest friendless gifted child, Max. "Every kid hates school." Paul, it appears is a stranger in his own family's life. "Nothing is as important as what happens in this room." She cries. "Is that it?" Paul asks. Oy, these people are miserable to even watch on the screen. I want a smaller screen. Paul forces a smile and says he'll talk to their kid. Paul asks about her daughter who is trying to help recovering drug addicts. "Why don't you ask her Paul?" These people are parents? I'm starting to want the pregnant screaming couple back. Paul and Kate talk about how they never talk. "Let's talk." The time table is a few minutes.

Bomb drops: Kate is seeing someone. Paul screams and yells and loses it, and he curses at his wife. I want to go home. Oh, I am home. "How does that make you feel?" Paul asks. "Like shit, and a week later I go back and do it all over again." Okay, so we've got one more screwed up shrink in the world, calm and collected on the outside to his patients, messed up to his family, a disaster inside his own head.

The prole husband's comment: "Why can't he have a manic patient?"
Paul cleans up the evidence of the bloody clean up. He smiles and lets his next patient in.
Posted by Dinah on Thursday, February 07, 2008

Your prole husband is smart. A manic patient would be interesting, albeit exhausting.

Paul is starting to get to me. And not in a good way. It's almost like "Everyone Loves Raymond" where all the characters just banter back and forth in an annoying sort of way, but nothing every changes. Except here, it's 5 nights a week of brand new content.

Paul is more flawed than I had hoped, and I felt that he came of as full of righteous indignation at her, and yeah, she cheated, but it was like he could pounce on that and ignore his own contributions or lack of presence in real and emotionally intimate ways, as part of the problem. In other words, I'd wished he'd have not acted quite so . . . the only injured party role.

I wanted to tell him, um, why are you asking your WIFE, how your daughter is doing? I know it's partly because his wife had just showed she was alot more clued in on their youngest, but still, it felt like an uncle asking after a nephew or niece in passing. Geez. BUT, obviously we know he's grown isolated from his family, that he's got blind spots, etc.

I actually think and hope that his working on some of these at least will be in the series, as it can around the session, or in an episode w/the odd no-show, etc.

I also think perhaps his youngest now being the age his daughter was when he stopped counseling/being supervised with Gina, and the complicated stuff from that time, perhaps it's triggered some of his current problems (current, but it doesn't happen overnight).

Then again, that could all be hooey. It's fun talking about it though. I think he'll show a strength, in this thing with Laura, with occasional weaknesses, but I don't think he'll go over the edge with her. At least, I'm hoping. They might throw in an almost leading to a kiss but he stops moment, it is a drama after all, but I think (hope?) that he'll stay strong. I think if he can push through the next two sessions with Laura and get AT what's behind her insistence and recklessness and stuff, at least some of it, then they'll have some chance of moving forward with therapy.

Anyway. I guess I sound like I'm defending Paul, I do see that he has alot of weaknesses, blind spots, problems, sort of like he's abdicated aspects or more of his parentness, and especially more so of his partner-ness with his wife . . . . and I am disappointed in "him" (he's a character, but it's interesting to get into it).

I do think there has to be a good bit of setup, so we'll see.

I also think the notsopregnant lady was lying in many or most respects; I think she perhaps took something to initiate a miscarriage (not sure what that might be) or I don't know what . . . . but I think perhaps she was lying about alot, even if it was a miscarriage and not instigated by her. Of course, my least fave char on the show is her husband, but then maybe it's Gina, but then maybe it's Alex . . . lol!

Tres drole, the comment from the prole. Tell him that Paul cannot have a manic patient because writing a precription for meds takes half a minute and they need to fill a half hour.

I find therapy to be immensely helpful in controlling both my manic and depressed symptoms. I sometimes find it more helpful than the meds...

Do you think some of our disappointment in Paul comes from a deep need to see our therapists/shrinks as perfect? Completely in control, balanced, and happy. It really ruins the mystique to see him be so, well, human.

Are they playing that couple comically in the English version? I loved how they played them here - so miserable, but often funny...it's so unpleasant to be around either of them that it is almost funny - the way they snap at each other and so on...that they are so annoying and always out to get each other that it is like kismet...

Interesting there what you said about us being disappointed in Paul because of a need to see our therapists as perfect, completely in control, balanced, happy. Do you know what thought has crossed my mind? I want to know that my psychiatrist is NOT some perfect, completely in control person. And I don't mean that I want him to be a miserable, out of control disaster. Just that I would like to know that there is some area of his life that isn't completely perfect - that he is human in some way, and also has human problems. However, in this wish for human-ness, I also hope that he copes with these things in some way that is something to look up to. So that I could have hope that it is possible to have a life that maybe isn't perfect, but that you can learn to live with these things and still enjoy your life. Am I making any sense?

I don't want him to be some perfect being. I want him to be human. However, I do not want him to be the mess that Paul is, by any means! Hmm - this is leading me into something I would like to discuss with him at a future appointment. He might actually like that because I'll actually talk about our relationship for a change, and I may even bring it up all on my own without him leading me into it. Must remember this for next week!

I don't feel disappointed in Paul - I just see that he is flawed and human, with problems just like everyone else. But I do think it's still rather stereotyped that the therapist has a therapist and his life is just as much a mess (if not moreso?) as his patients.

I think Paul is a dweeb.

Yes, I would like my therapist to have some flaws too:). I want her to be able to relate to what I'm saying on more than just a textbook level. I love my therapist, but sometimes she seems too perfect. To the point of annoying me! I wonder how I would feel if I found out she actually was flawed? Relief or ambivalence, I don't know.