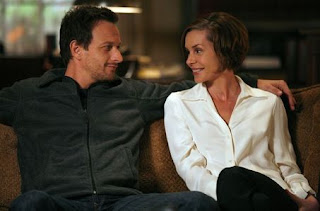 Last night's episode of In Treatment was the final blow to my long day. Here's why I don't do couples' therapy.

Amy comes alone, apparently Jake has quit. She feels great, happy as a clam to have miscarried, but disturbed that she lacks the appropriate grief she should be feeling. She comes on to Paul, flirts with him, insults him (he might be handsome on a deserted island). She's great at pushing Paul's buttons and he looks unkempt and ruffled-- she describes her imagined scene of him trying to get her blood off the couch so well that one might wonder if she (like all the others) is stalking him. I wonder if she's manic between her repeated references to her mood elation and her hypersexuality. Jake shows up, angry and knows she'd made a pass at Paul. A repeated pattern of seducing authority figures, apparently. She calls him Paranoid. These people are annoying. They leave in a huff.

So Kate the wife of shrink walks in to announce she's going out yet again. She's decked out, and by the way, in a play-out of the couple's session that just ended, she'll be going to Rome next week with her lover. Paul can use the time to connect with his children.

Is there anything to say? Happy Valentine's Day.
Posted by Dinah on Friday, February 15, 2008

I thought much of what you did; I thought that Paul was starting to elicit some "realness" from her, and even emotion over the miscarriage, when Paul arrives and she covers it back up.

Paul just tells her to go (like he can stop her) but she's going off for a WEEK with someone else; that feels to me like a make or break moment, like it'd be ok, you do this, you are coming home to divorce papers. That's it. Get out (I'm assuming his work pays for the house, although she's raised the kids, not to devalue her for that that's "worth" quite a lot, if one puts a value on it).

Oh, and I hope you gals and guy had a happy Valentine's Day with much chocolating going around. I had to be Mary Poppins in a snowstorm with the snow blowing sideways and the umbrella often held out sideways when it wasn't trying to carry me up and away, to walk to parent-teacher conference at the school. I felt like, wait, isn't this the kind of story parents tell their kids about the olden days, when they had to trudge uphill through blizzards to get to and from school? Lol . . . . I'd say that called for a couple rounds of hot chocolate! Oh and it was a BITTER cold wind too, TOO cold to snow but that was just at the ground, it was warm enough to snow just atop that. Ugh. The day before had been sunny and in the low 50's . . .

Hello, i just found your blog and quite enjoy it! Maybe its me, but i've been enjoying In Treatment a lot! I guess its not very realistic from a therapists viewpoint, but from a patients viewpoint it might be???
Michelle

Sheesh. Christ on a crutch! This used to be a very interesting blog. Now you've turned it into a soap opera about hogshit. C'mon, get back to the real life stuff. Enough with these crybaby rich and famous assholes.

I like the springboard topics that come out of the In Treatment commentary, like about mandatory reporting and transference. I do want to hear about this Xanax war though...

There'll be periods where a string of stuff I'm not as into will be posted; that happens. I feel like it's important that someone in the psychiatrist blogosphere is using it as a springboard, and I'm glad our fave shrinks, well one of them, is doing so here. I also like what her husband has to say.

Plus, honestly, it's interesting to discuss dramatic tv that one has in common with someone else; I know that some of you readers do not watch it. Some of you do.

Considering how frustrating it must be that she can't discuss her real patients without alot of confabulating, it must be refreshing to discuss these tv ones.

Dinah, whatever you decide, I'm with you, but it doesn't have to be an all or nothing - it doesn't have to be any kind of decision at all, since, of course, it's your blog and up to you. Whatever you decide tho, if you do, I hope there's still some In Treatment around because I think you enjoy the discussion, in addition to the value of the issues raised and discussed. And I enjoy discussing it with you.