Do Women Talk Too Much?

Contrary to popular myth, it turns out that women and men tend to talk about the same amounts. A soon-to-be-published study described in Science reported that Pennebaker, et al., "equipped 396 college students--210 of them women--for several days with voice recorders that automatically turned on every 12.5 minutes to record for 30 seconds during their waking hours. All words spoken by the wearer were transcribed, counted, and extrapolated to estimate a daily word count."

Now, this does not prove or refute the long-held belief that Dinah speaks more than Clink or Roy, as there is a wide variability in how many words one speaks.

In the study, the variation ranged from a low of 700 to a high of 47,000 (that one was a man), according to John Grohol's post in PsychCentral.

While the study, which really only applies to college students and not the general population, failed to confirm the widely-held belief that women talk more than men, it did confirm another stereotype: 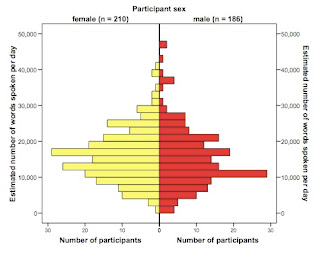 Here is the histogram showing the spread of spoken daily words among the study participants:
Posted by Roy on Friday, July 06, 2007

But who talks more about the iPhone? Fashionable technology must be a transgendered topic discussed equally by both sexes, but for different reasons. Men: I want one. Women: But why?

That picture made me fall over giggling!

Transgendered. That made me think about the GBLT community and that's a very small sector of the population. No doubt they talk about fashion and clothing a lot, however. A big part of integration. I'm not sure how much an iPhone may play into that--sorry, attempting to be humourous.

But seriously, interesting that women may be finally getting over the bad reputation of being blabbermouths.

Equal opportunity for everyone to gab incessantly, I say. PA can yak like there's no tomorrow or sit like a mute so who knows where she'd fit in...

Hmmm. I NEVER talk about fashion.

How about a post on how POORLY men listen?

I bet YOU talk the most in the podcasts, Roy.

I admit, I like your voice the best. Why? I mean, I wish I had a tape of you talking to put me to sleep at night (I mean that as a complement, BTW). I get frustrated with my shrink as he ummmmmmmssssss and uhhhhhhhhhssssss waaaaay too much.

I wanna know....are there other female or male Shrink Rap readers who think Roy has a great and sexy voice?

Lily (with feathers ruffled. "Fashion" could that be more sexist?

The classical interpretation of the false impression (it's been known to be false for at least thirty years and probably much longer) that women talk more than men is that men don't want to listen to women. One way of understanding that is to propose that women are good listeners and men are poor listeners, so that men go to women when they want to be listened to. Another would be that men just don't want to hear about fashion.

(Yes, yes, I went to college in the eighties. So shoot me.)

(And by the way, I hate "men do this" "women do that" research. The differences between groups are always in terms of tiny offsets in the modes of normal curves. There's always much more variation within a group than between groups. Unless we're researching clit size or something, in which case there's more inter-group variation. But that's the exception.)

(Which is what's so nice about this research: no difference was found, and it got published anyway!)

patientanonymous - in my experience, there's little talk about fashion and clothing amongst those who are TS.

The prime subject is our children - usually advice on how to make sure they're not harmed by our transition. Very often legal stuff about gaining access which has been required by the court, but denied in practice. Sometimes heartfelt vents by those women who haven't been able to see their children in years, or who have (by court order) to dress in unconvincing male drag in order to see them.

The next subject is... shrinks. How to tell the good from the bad, how to educate the well-meaning but ignorant therapist who is totally out of their depth, or how to find someone half-competent in this specialised area.

The very lucky will find someone experienced who will either delay things until the issues are resolved, or give the go-ahead straight away if there are no co-morbidities and the case is unequivocal.

Next best is the "gatekeeper", who follows the Standards of Care to the letter, giving out permission for surgery 365 days (366 on leap years) after therapy commences. Basically, give the patient what is needed, but CYA.

Then there's the ones who dabble and try to fit a neurological condition into a familiar box, like Hysteria or Addiction, before giving up and helping the patient find someone who actually knows something about the area.

Worst are those who keep the patient in therapy for many years, then finally admit that they have religious objections to the whole concept.

There's not much on fashion. Something on shoes though, finding every-day mules rather than fettishware in size 16 is difficult. Most of those who are "TG" are not "TS", and the concerns are quite different.

A lot on Surgery, who's the best surgeon for particular needs, lots of congratulations for those having surgery. A ridiculous amount of hot air on feminism and the nature of gender.

Also model railways, care and feeding of Unix boxes, life in the military (for so many of us have been in uniform), transitioning at work, sunsets, world events, and remembering our dead.

LOTS of support for those whose lives have just been flushed down the toilet. "Suicide is a permanent solution to a temporary problem" is said at least once a week, when someone has just lost their job, their house, their family, when their parents tell them they should kill themselves and not dishonour the family.

A lot of crisis support for rape and other assault victims too. Some of the date-rape drugs have horrific long-term effects. Some gals have been "gutted like a fish" as their neovaginas rip rather than stretching when gangbanged.

Putting the pieces back together in such cases is a long-term proposition, but those who have survived such experiences are wonderful therapists for those who have just undergone them. Most of us are untrained, but there are some professionals too.

It's bad when we lose one, and there's a danger of a chain reaction, but so far I've been lucky. I've lost two in two years, one in the UK, one in the US, and I've helped over a hundred.

It's scary when someone calls you her "guardian angel" though. My feet are of clay, but no matter how often I tell those in need that I'm only human, they treat me like a plaster saint. OK, I have empathy, but I'm flying blind here!

I'd make a spectacularly terrible therapist, I'm unable to retain any distance from those I'm helping. Fortunately we help each other, and the few pros amongst us prevent us from doing too much harm.

I still feel I've fallen down a Rabbithole like Alice. Three years ago, I knew I had "issues", but had no idea that any of this stuff happened. Using my Google-Fu, I've since looked up Texas Divorce Law, medical data on Kleinfelters Syndrome (many of us are Intersexed, contrary to the literature), and TS resources in Kansas of all places, just to help others. Plus oodles of research on surgeons, makeup, and especially effects of transition on children for my own situation.

OK, I talk too much too. But you knew that.

Did they count guys yelling at the game on the tv? Because I don't know any guys who talk that much. If I did they wouldn't be my friend for long before I pushed them off a bridge.