Serotonin Knockouts are a Pain in the SSRI 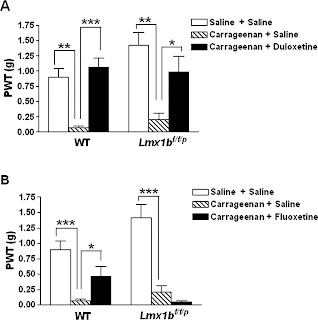 [PWT=pain withdrawal threshold... a lower number means greater sensitivity to mechanical pain. Carrageenan was used as the source of mechanical pain here. In A, you see that duloxetine (Cymbalta) restored PWT to normal in both normal mice (WT) and mice without serotonin brain cells (Lmx1b), thus indicating a pain-relieving effect. However, in B at the bottom, fluoxetine (Prozac) did NOT improve the PWT after injection of carrageenan (focus on the black bars), indicating that Prozac does not help this kind of pain in mice without serotonin, meaning that serotonin is an important part of pain regulation, but norepinephrine may be even more important.]

Okay, Dinah, here's something (though it doesn't really "shake things up").

Check out this article in the Journal of Neuroscience by ZQ Zhao et al., showing pretty good evidence (like we needed more) that the brain neurotransmitter, serotonin (or 5HT), is involved in pain regulation.

What they did was use knockout mice -- mice which have been genetically altered to remove or disable the gene which codes for a given protein -- which have had the codes for serotonin neurons in the brain removed. So, these mice do not have serotonin-producing brain cells. This permits the researchers to see the effect that selective serotonin reuptake inhibitors (SSRIs) and other antidepressants have (or don't have) on the mice.

They were interested in the anti-pain (also called nociceptive) effects of these antidepressants, and the role that serotonin plays. For example, we know that antidepressants which have BOTH serotonin and norepinephrine (NE) effects (SNRIs, like Cymbalta and Effexor) are better at reducing pain than those with solely serotonin effects (SSRIs, like Prozac and Paxil).

The main reason I posted this is just to demonstrate the cool things one can do with genetics. You can knock out a gene; in this case, the one responsible for turning a developing neuron into a serotonin-producing neuron. You can then figure out what the consequences of that absent gene are. Finally, this also emphasizes how we can learn how to fine-tune our knowledge about pain control, so that more effective -- and less addictive -- treatments can be developed.
Posted by Roy on Wednesday, May 30, 2007

I know that I don't really understand the science and research on this kind of level, but let me see if I get this straight... They knocked out the mice's (?) ability to produce serotonin, but then gave it cymbalta or prozac, and then found that the cymbalta served to greater reduce pain. However, the mice that had endogenous 5-HT (which, I'm assuming, means they didn't have their serotonin producing neuron genes knocked out?) overall fared better.

Is there more to it than this? Am I oversimplifying?

Obviously, I find any kind of chronic pain research to be of interest... :) I've tried both prozac and cymbalta, on a personal note. The prozac was actually started with a diagnosis of fibromyalgia (which I do not have) in mind. Neither seemed to reduce headache or overall pain for me, but they both had some wild effects on my mood. The prozac simply changed my personality - I just didn't care about anything....not even about failing exams in chemistry.... And while on the cymbalta, I became extremely more depressed......I was also incredibly anxious and had palpitations, but the worst part was how much more sad I felt...maybe depressed isn't the right word... As opposed to lack of emotion, I couldn't stop crying. I had tons of emotion....just in a negative sense.

I still believe that the route cause of my chronic pain is in the autoimmune/inflammatory processes, however, which could be why drugs like these (and all the others I've tried) have had little or no effect on my headaches.

Completely on a tangent and in no way a reflection on your opinions stated here (I am not putting words in your mouth)...

I suspect that all pain medications will always be considered addictive in the US, because they relieve pain. We have an analgesic hostile climate regarding even over the counter pain medications. People want them and grow to rely on them. And sometimes "seek" them for no other reason than that they work to reduce pain, which is unpleasant and hard to tolerate for most people. Rescue inhalers are emotionally addictive, like pain medications, because they *work* to relieve shortness of breath, which people likewise don't tolerate well. There is no reason why people should be expected to tolerate these conditions well - they are physiological danger signals and tolerating them is not a survival trait, one imagines.

I say treat drug addiction where it occurs, but continue to use the pain medications which we know to work. :)

Carrie, that's about right, I think. They are dissecting the physiology of pain, trying to understand the roles that different neurotransmitters play. It's sort of like finding a radio and then taking a single part out and seeing how it works. You do this enough with different parts and you might get a clue about which parts are more important.

Psyche, I think you are confusing dependence with addiction. People may be dependent on Motrin without being addicted to it. Someone with diabetes is dependent on insulin, but they are not addicted to it. The insulin also relieves an uncomfortable feeling, but one doesn't keep using more and more to get the same effect PLUS craving PLUS continued use despite negative consequences. Here's more on the difference from NIDA.

Roy - Thanks! Good to know... The annual research symposium for the American Headache Society starts at the end of next week in Chicago. Should be some good stuff coming out of that, as usual!! Can't attend again this year, but certainly am looking forward to the news and updates that are presented there!

I get an uneasy feeling when experiments with animals and pain responses are conducted.

Yes, I know it's necessary, there's just no other way of finding out what we need to know to relieve suffering, not just in humans, but in veterinary practices too.

I know it's been through Ethics committees, and the suffering kept to a minimum.

I don't have to like it though, even though I'd have no qualms about doing such research. I hope none of the experimenters get too comfortable with it either.

At what point does lack of empathy for other animals become sociopathy and psychopathy? I have no problems treating a Spiny Lobster as a thing, a "toaster" of you like, as we can replace large parts of its nervous system with cheap electronics and it still "thinks" the same. But it is possible to be cruel to a mouse.

This is a nice Medscape series on pain.

I have Nail Patella Syndrome which is caused by a mutation on this gene - LMX1b. I am about to come clean with my GP about my long term depression and hopefully start a course of AD meds. What implication would this info have on my course of treatment?

jonez- can't really say anything about your specific situation, but I can point you to some info about NPS (nail-patella syndrome). OMIM has a big article about it.

I see mention of increased risk of kidney problems, glaucoma, and seizures, but nothing about mood disorders. They also mention decreased sensitivity to pain.