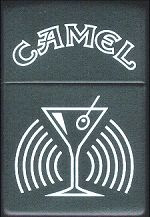 So Camel and CamelMan went out to dinner the other night. They're sitting alone eating their dinner in peace because CamelChild is off at a national oratory competition where she's leaving the rest of those orating children behind in the dust. The waiter brings them drinks and declares they've been sent over as compliments of another couple in the restaurant. Camel looks around and sees one of her patients. How nice? How awkward. Camel called me from the restaurant....What should she do? It's not really a question, it's more of an I-need-to-tell-this-to-someone moment. CamelMan wants to buy the other couple drinks back (CamelMan is not a physician or mental health professional). Camel knows the sender of the drink, sitting there with his own, is an alcoholic, but even if he weren't, she still would feel uncomfortable reciprocating.

What to do? Thank the patient and move on? Sometimes this is the only thing to do. Tell the patient she can't accept this, and risk that the patient will feel rejected, or start a whole back-and-forth "I insist" scene? Quietly tell the waiter to transfer the charge to their bill, hope it happens as quietly as intended and the patient doesn't leave feeling insulted? Perhaps there is no perfect answer. Generally, though, shrinks hate it when this happens.

-- Happy Memorial Day weekend. ClinkShrink is playing scrabble with her family. This I know because she sent me a cellphone pic followed by an email asking for words with 3 u's. Roy is doing yardwork and thinking about ducks. And I will be cooking dinner tonight for Camel and CamelMan.

--It's not too late to observe National Duckling Month!

--Double Billing will continue on Tuesday.

I still think 'unuvula' should be a word.

Happy Duckling month to you too! Hope you are enjoying your memorial day weekend.

I use an online scrabble dictionary

The letter U really is a useless letter in scrabble. At least I think so.

Let's see, words with 3 U's that could be played in a single Scrabble turn... how about "unctuous"? Or "unusual"?

A friend of mine from grad school tended bar on the sly (we were technically not allowed to hold jobs during the school year). She announced to me one Monday morning that she'd served drinks to a client of mine--whose presenting problem included going to bars.

She didn't realize this was my client until she ran the credit card, whereupon she recognized the name from my stack of charts in the practicum office we shared.

Thankfully, my client was not into lying, and volunteered a full account of the previous weekend.

My shrink doesn't drink...so the most I could send him would be a bottle of water.
Honestly though, what I'd do would be to slide beneath the table and stay there until he'd left the restaurant. And hope that my dining partner was understanding of my need to eat under the tablecloth!

Another bartending story: several years ago I attended an art auction/general benefit event for a local mental health agency. I went to the "bar" to buy a soda--and who was tending but my psychiatrist.

I asked her later whether she would have sold me a beer. She said, "Why would you ask for a beer anyway? I know you don't drink."

"Yes, but what if I did ask for a beer? Would you have sold me one?" I asked.

"Probably," she said, "but then we would have had a discussion about meds and beer at our next appointment."

It seems to me that the patient was trying to send a message to Camel by sending her and CamelMan drinks. Like.. "Hey! I'm still drinking, and by sending you a drink, I'm trying to get your permission to continue!!"

I don't know that Camel could take action at that time, and it's hard to figure out how to not accept a drink, but I certainly would be leery of accepting it.

But.. then again, I'm no psychiatrist, so what do I know?

Though I started my life as a shrink in the Bronx(residency at Albert Einstein, followed by an upper west side Woody-Allen type private practice for a few years. Yes, I'm a living dinosaur), I've lived and practiced for the past twelve years in a tiny town of 23,000 in upstate NY. None of the rules I learned as a resident apply here. In fact, things are so different, I've been tempted to write a small paper about it. I run into patients EVERYWHERE. What I've got in my grocery cart gets ogled, what brand of gas I buy and how much gets noted, the length of my son's hair, the empty pizza boxes and coffee containers littering my husband's car (a patient of mine told me I should "make him" clean it up!), whether I shop at the mall or don't shop at the mall,whether I wear my hair up or whether I wear it down, these are all brought up in session to me by patients. I'm a doctor in a small town, a woman doctor (professional women are still a rarity here) and a minor celeb(the pressure, the pressure!). Getting sent a drink by a patient while dining in a local restaurant with my husband is totally within the realm of possibility. At first, when these kinds of contacts would happen, I would squirm and feel incredibly uncomfortable. As time passed however, I've had to accept that I've got to have a life and have a right to live it, warts and all. My strategy, always,is to maintain social graciousness, i.e. in the restaurant, I would probably wave and mouth a thank you, and/or stop at the table on our way out to say thank you. I wouldn't feel obliged to send a drink back, or even, to drink the one sent. I am discreet in my acknowledgement of the person, being careful to not reveal how we know each other. In the next session, I would address the clinical issues. As a general rule of thumb, if a patient wants to acknowledge me, then I acknowledge him/her. If he/she doesn't acknowledge me, I don't acknowledge them. As a sidebar, though, this scenario is the mere tip of the iceburg. For instance, my husband and I are thinking of buying a building that is not zoned for commercial use (i.e. we want to use it for our office). One of the members of the local zoning board is a patient of my husband's. In order to get the lay of the land, we are consulting with her, a little wierd but necessary. Our current landlord is a former patient of my husband's. Our landlord's son is a deadbeat former patient of mine. Several of our patients are involved with the parent-teacher organization of our son's school, and for a while I was involved too, in a contentious way for a while with one of these patients in my function serving on that committee. THAT was wierd. We have patients at the synagogue we attend. We are both active there: my husband is on the Board, and has to deal with a very sick patient who is also on the Board. I am the "yenta" and write the gossip column for the bulletin (talk about holding two different states at the same time!!)Congregants frequently pull one of us aside for a curbside consult. I'm friendly with the Rabbi, also a woman; we share these issues in common, and get together every now and then to exchange experiences (discretely and without naming names of course) and to support each other. The former Mayor was a patient! The former City Chamberlain was a patient! It is simply impossible to maintain that psychoanalytic distance; in fact, it's bad manners, and creates bad feelings. I know, because the other two shrinks in private practice in town(also a couple) maintain that frigid distance wherever they go, and let me tell you, they are not liked. It's a constant work in process, but my guiding principle is to always be kind, and to be gracious. Even if the person is a patient who dropped out owing me a lot of money after accusing me of unethical behavior, who, while I am trying to buy stamps at the office, tells me how much he needs to come in to see me. Sure, I say, smiling graciously and impersonally. Settle up your bill, then give me a call. Excuse me, I've got to go.

You could also mess around with this nice Scrabble tool... http://www.wordplays.com/fcgi-bin/scrabble.pl

Wow, Daniella... a small-town psychiatrist who writes a gossip column in the local schul bulletin. Talk about an exercise in boundary maintenance!

I'm just a teacher and I think I would be weirded out by that. Drinking in a resturant in front of parents is one thing (so long as I am not roaring drunk); accepting a drink from them is another. There really are certain boundries that shouldn't be crossed.

P.S. My liking for the letter U is only slightly less than my hatred of the letter C, and having three of them at the same time would irk me to no end.

My, daniela- I take my tinfoil hat off to you!

Ask the waiter to send the desserts cart over to them, with your compliments.
There are few social problems that a suitable application of Chocolate cannot cure.