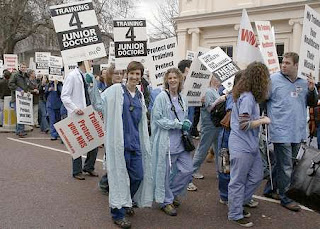 This whole British MMC thing is just out of control. If you've been following along on some of the UK blogs in our blogroll (like the Psychiatrist Blog or Trick-cycling or DrCrippen) then you know about how the government has set up this new system, akin to the US "Match", to connect young doctors with training sites. However, they've really botched it, and it seems more like the military, where you go where you are sent. Yesterday, twelve thousand junior doctors marched in protest about this crappy system. It is amazing that this many docs got together to do this. It says a lot about how messed up this is.

"They fear the Government's Modernising Medical Careers (MMC) scheme, designed to speed up the training process to become a consultant, will split families, drive some doctors abroad and force others to leave the profession.

Some 30,000 are competing for 22,000 posts allocated under a computer-based system, plagued by technical problems, that critics say takes scant account of the suitability and experience of candidates.

Concerns about the new system, which was introduced in January, came to a head after The Daily Telegraph gave a voice to angry and dismayed junior and senior doctors."

Oh yes. I've been following this, mostly at one or two blogs, and it is such an incredibly horrible MESS. I really really feel for the doctors over there, because their whole life, including past, with all the work to get to this point and the sacrifice involved, present, and future is being thrown in a blender without a lid to be possibly chopped, whirled around and up into the air, and then try to pick up the pieces or threads if there is one for you, and follow it to who knows where . . . .

I hope the govt. listens, and listens GOOD. Other countries look down on us for Pres. Bush . . . this whole mess seriously tarnishes their governing body(ies?), at the very least, if they don't care about the docs, they should fix it for their own cover their butt sakes (which, sadly, may be more of a motivator for some or many politicians . . . )

This has all the makings of a complete disaster. Not many years ago, the British government got rid of a lot of nurses, then begged them all to come back, offering all sorts of incentives and recruiting from all around the world. Now it is getting rid of nurses, physiotherapists and doctors, and I doubt if they will come back when needed.

The powers that be have not planned. It used to be the case that British medical schools produced the number of doctors that were needed and then they were employed within the NHS. We became short of doctors and recruited overseas. Then we became short of cash, so we told non EU doctors they could only have jobs if no EU candidate was suitable. But we haven't factored into the system the fact that doctors from anywhere in the EU can legally apply for posts on the same basis as local doctors, and we have expanded our medical schools, producing more doctors. So we have more doctors than places. It was foreseeable but no one planned for it.

So we dump our commonwealth doctors in favour of EU doctors from new states, because that is the current politics, and we train more new doctors than we have places for.

And in a few years, after we've sent away our commonwealth doctors, and our Eastern European doctors have gone home and our own doctors have settled into other English-speaking countries that have welcomed them, we'll be begging round the world for doctors to bail us out. We'll be bloody lucky if any of them come to our aid.

Since leaving the NHS for foreign parts in 2002 I have watched with awed fascination. Any guilt I harboured for the cost of my medical training has evaporated as the evolving fiasco that is (was?) the NHS has developed. All I can think is- thank the gods I got out in time. This MMC thing is incredible.
I will not be coming back- the sun isnt always brighter on the other side of the world but at least I can see my hand in front of my face.