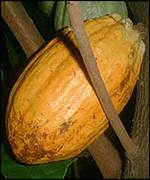 The news is abuzz with the latest research, suggesting that chocolate -- specifically, one of the ingredients, epicatechin -- is one of the most important medical discoveries since penicillin.
Why? Apparently, folks in the Kuna tribe, near Panama, have incredibly low rates of stroke, hypertension, heart disease and cancer. They also drink an average of 5 cups of cocoa per day.
The stuff appears to be a great antiinflammatory drug, as well as an immunomodulator which helps to prevent cancer. What the hell... let's say it's a great antidepressant, antipsychotic, and antianxiety treatment. We three shrinks are going to open up a posh, inpatient psychiatric program, called The Cocoa Retreat, where i.v, i.m, and p.o. forms of chocolate flow ad lib. You can bathe in it, too, because (of course) it prevents wrinkles. We will only take cash (or its equivalent in cocoa).
Posted by Steve & Barb on Monday, March 12, 2007

Email ThisBlogThis!Share to TwitterShare to FacebookShare to Pinterest
Labels: chocolate

That's what I say to this yummy news!

I believe the Food Network did a show on chocolate. Of course they talked about Hershey, PA. Apparently they have a spa there that is all chocolate oriented. I was amazed at all the stuff they did with chocolate!

OK, for 1 million dollars, what is mole and what does it have to do with chocolate? Accent mark over the e. No cheating!

Disclaimer: No one will win 1 million dollars.

It's a spicy mexican sauce, a savory one, but it has chocolate in it too!

My hubby went on an LDS mission to Mexico City for 2 years, so that's how I know.

So I'm trying to figure out how long these folks live and what they do die of. Mortality rates by disease are kind of worthless without an age qualifier.

oh, and from the Harvard Gazette
In another big surprise, lab tests reveal that Kuna cocoa stimulates the body to produce something called nitric oxide, a notorious compound present in cigarette smoke and automobile exhausts. However, NO, as it is also called, has a good side. "It turns out to be part of an internal regulatory system that operates in the heart, blood vessels, brain, penis, liver, pancreas, lungs, eyes, and likely every other organ in the body," says Thomas Michel, a professor of medicine at Harvard Medical School who was one of the first to recognize the wonders of NO. "It is a versatile gas that could lead to new treatments for high blood pressure, blocked arteries, congestive heart failure, stroke, dementia, and impotence." (See April 2, 1993, Gazette)

Okay, count me in. I like a touch of Kahlua in my Kona Cocoa and maybe a little whipped cream on top. Minimarshmallows are just fine too.

I like how you think, Roy. My personal chocolate retreat is the Godiva shop. I have a packet of Godiva cocoa burning a hole on my kitchen counter even as we speak.

I'm only coming to your psychiatric chocolate spa if you have oompa loompas.

For the world's cutest chocolates, check out http://www.moonstruckchocolates.com

Oompa Loompa's are NOT scary. They just have really strange looking orange faces. Maybe we could find some cute, non-scary oompa loompas.

In other news, MWAK- the chocolates are sooooo beautiful. I don't think I'd be able to eat chocolates as beautiful as those - I'd just look at them. Oh wait. Who am I kidding? They'd be gone in 30 seconds flat.

While researching this topic, I went to the Cadbury factory in New Zealand in February. And while there I was able to eat real cacao beans. I'd always wondered about these because I have read about how they're bitter and taste dreadful etc. However as I'd been priming myself by eating 70% cocoa in the months prior to NZ, I actually found it to be not too bad. And the aftertaste was sensational. Pure cocoaey bliss. I could practically feel my arteries dilating and shrugging off their atherosclerotic coats, I had an otherwise inexplicable sense of well-being and peace with the world (the fact that I was in a chocolate factory does NOT take the inexplicable out of "otherwise inexplicable") and a rather eerie shiver went down my spine, which I knew must be my p53 tumour suppressor gene kicking butt against any rogue oncogenes that were battling for my cells.

Then I went to the factory store and bought adulterated and bastardised milk chocolate blocks with banoffee pie and fudge brownie filling. But that's ok, because that one bean had already done its work.

And don't forget to provide large amounts of coffee inbetween the cocoa-fest. As per your previous link that caffeine intake is inversely linked to the risk of suicide?

Actually, the perfect combo is chocolate covered espresso beans. Although, maybe you could cover cocoa beans in chocolate. That could be good.

I'm a nicer person when I have my chocolate.

Call me a scenic, but some of you might want to look at who funded the whole study. One might also be inclined to look at the lifestyle differences between the Kuna and the members of our sickly society.
This seems to me like another way to relegate the variegated intersectional knowledge of endangered indigenous peoples to a commercially convenient category... just a thought.
wasmaled ikar/