How About a Little Inspiration? 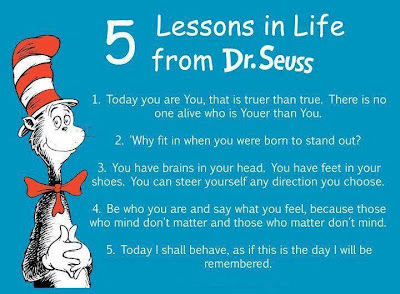 Anyone who knows me as a therapist knows that I believe that change is difficult, and that for the most part, people come flawed.  We seem to spend an inordinate amount of time identifying and trying to fix our flaws so that we conform to some standard of how we're supposed to be, and this leads people to feel badly about themselves and have the infamous  Low Self-Esteem.  Or to feel badly that they aren't richer, prettier, smarter, tougher, whatever.

I think people should come to terms with who they are and say Yup, I suck at this.  And then they should not spend much time thinking about what they are bad at and they should figure out what things they like and how to grow those aspects of themselves and make those characteristics work for them so they can live a more fulfilling life.

That said, and with minimal relevance to what I really want to share, I really enjoyed this TED talk by Dan Gilbert on the pursuit of happiness, and I hope you will too.  I wish I could speak like this (maybe with a little bit more air exchange).  And I stole the Seuss cartoon from Kathy's facebook page.  Enjoy.

I'll have to listen to that talk, but I had a couple thoughts already.

This sounds like "radical acceptance", which I struggle to apply to different stuff, but I'll get there because long before I'd heard the term, I have an experience that proves to me how valuable it can be.

See, my whole life I've hated myself, sometimes for reasons I can't figure out, like the few memories of when I was little and seemingly didn't have any reason to feel that way, but did, or for a whole variety of other reasons that feel valid to me, and in fact many of which society tends to agree with.

Feeling lazy (motivation is a big problem with me, and I was undiagnosed ADD and stuff, so this was big) and labeling ones' self so; beating yourself up with it.

Feeling like a screw up, feeling awkward, feeling so many things. Like if only you tried harder, you wouldn't fail all the time (well, what SEEMS (or SEEMED) all the time) . . . feeling like you are a bad person for not being able to hold a job, etc. Society doesn't view that sort of thing kindly.

Anyway, after my suicide attempt in the mid-90's, I did alot of soul-searching. I decided that I would and could accept myself, flaws and all (and there were/are plenty), instead of constantly fighting myself, beating my self up inside, etc.; I would move forward, not pressuring myself to be different, just, well, start from a place of complete and total self-acceptance and then eventually build from there. No pressure on myself, though; it was so hard just to accept myself I had to do it with no other goal in mind. I had some fears that this might be a bad thing to do, because if I accepted myself and all my flaws, wouldn't I be "endorsing" those flaws, those flawed behaviors, etcetera? Still, I proceeded.

You know what? Paradoxically, the act of accepting myself fully and totally with no self-hatred (some mental work had to be done to push down the usual self-hating thoughts, though) actually was freeing, enlightening, and so deeply profound. Paradoxically, I thought, I became so much more . . . healthy-seeming; I couldn't or didn't undersand how accepting everything I thought was "wrong" with me, could lead to feeling so good, could lead to feeling like I had a rock-solid place from which to proceed, from which to pick which direction to go . . . I couldn't understand how accepting all the "bad" about me, could feel so positive. How it could lead to feeling so STRONG.

I wasn't pressuring myself, I kind of "sat" in this for a couple months, although somewhere I knew that I'd move forward and work on stuff (I didn't know what, and it felt overwhelming as to which "what" I'd pick to work on first, so I tried not to thnk about it), because I felt so utterly capable. I had to "sit" in these feelings, to solidify this foundation, to make this way of thinking secure.

I met my husband though about a month and a half after the suicide attempt (perhaps not the best time to start on such a big new chapter of my life, but stuff happens when it happens). So this kind of took my attention and I'm not sure how this radical acceptance thing would have played out as time went on . . .

I can remember that feeling, of so much PEACE with yourself (not perfect, but my aunt intro'd me to Burns' book Feeling Good the night I attempted suicide, and I put some of that into effect fighting the old impulses to beat up on myself, etc.), of so much acceptance, self-power, self-love (well, the beginnings of that at least), of so much freedom from the self-hatred that had been dragging me down . . . the feeling of all this and other things that I can't quantify in words, is such a beacon for me, such a paradox for me, that I strive to reach that place again (um, hopefully without the suicide attempt, first).

I'm not putting this well, but it was such a seminal moment for me.

LOVED this post, the Dr. Seuss pic, and the Ted Talk. I hope you don't mind if I "steal" both for use on my blog...but I was inspired! :)