Ooooh, let me tell you: I love vacation.  I really love vacation.  I'm back.  It's cold here, and I spent the day unpacking and doing laundry, and getting ready to start my week.  I returned calls, went in to the office and checked my mail, emailed, postal mailed, and watched the Ducks win the Rose Bowl.  Sad, because even though we Shrink Rappers like ducks, I have my own personal Badger out in Pasadena cheering for Wisconsin, and it's a sad football day for him, I'm sure.


Roy did a great job of holding down the blog.  Please give him a hand.  Clink was off on another one of her adventures.  For some reason, vacation is not fun for her if there isn't the possibility that she'll fall thousands of feet, get eaten by some form of wildlife, or have her life depend on properly functioning equipment while she gurgles beneath the sea.  She's the only person I know where "I had a fantastic time" is followed by an injury report.


It was a glorious night for ringing in a new year. Temperatures, unusually inviting for a New Year's Eve in Harford County, hovered around 43. Wind was non-existent. And many people had gathered around the Havre de Grace Middle School grounds for the annual Duck Drop and fireworks to welcome another new year.

In other stories around the web, if you're a distracted duck, you might have notice that it's hard to find Ritalin or Adderall-- perhaps another example of DEA limits allowing Big Pharma to be being overly ducky about reducing supply of the cheaper, generic medications.  From the The New York Times, do check out "A.D.H.D. Drug Shortage Has Patients Scrambling."


And if you're a duck contemplating filing for Social Security Disability, do read Dr. Steve's post on Thought Broadcast about The Curious Psychology of "Disability."  With 41 comments on that post, I'm going to swim away from the temptation to comment myself.

And finally, for those ducks who want to know the latest on Electronic Medical Records, check out Shrink Rap News over on CPN for "Notes from SAMHSA's EHR Summit."  If that doesn't make you want to be served up with orange sauce, then nothing will.

So I love vacation, but I did miss all the Shrink Rappin.'  Happy New Year to everyone! 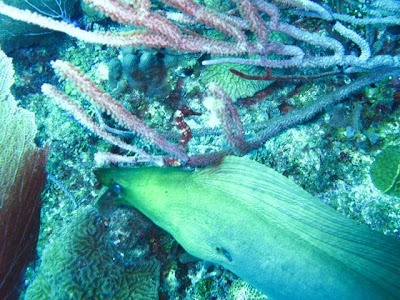 From Clink: I don't have a duck in this race, so I thought folks might enjoy a seahorse instead. He's black with white stripes and seems to be perched on top of the green moray eel's head. Yes, the eel was that close.

No significant injuries this time.  A slight jellyfish sting and lots of no-see-'ums, that's it.
Posted by Dinah on Monday, January 02, 2012

Welcome back from vacation, ladies! Thanks for holding down the fort, Roy!

My brain is mush after two nights of poor sleep and 90 minutes of trying to learn the rules for a game called Space Hulk Death Angel The Card Game (this company does poorly written rules I've discovered after recently getting one where there's half-drunk communist gnomes on a sinking submarine . . . .)

My brain hurts tho; does it take a rocket scientist to write a rules manual? ugh. Speaking of Add, mine is showing, good thing I have almost half a year of vyvanse (cause I kept forgetting to take it lol).

I think they had the half-drunk communist gnomes write the rules, on second thought . . . pass the grog and kill that kraken! Hee.

This distracted duck is discouraged by the ADHD stimulant shortage. I went to 4 different pharmacies last month before I could get my Ritalin script filled. Felt a bit like a drug seeker, driving around town all afternoon! Being a college student did not help either, getting the 4th degree at every pharmacy, despite my very legitimate prescription written by my pdoc.

I understand the need to monitor and limit controlled substances to minimize diversion and abuse of such drugs....but all of us affected by these shortages have been assessed by physcians and determined to be in legitimate need of stimulants...perhaps the DEA should collaborate with physicians to set the raw substance quota in better alignment with the true # of stimulant scripts written (...unrealistic idea?) to ensure every patient has access to their medications.

Conversely if the problem, as the article suggests, is that big pharma companies set their own limits on generic vs brand name manufacturing with their allocations of raw material, I would appreciate being given the option to buy brand name. Either every pharmacy I went to was out of stock on both generic and brand name Ritalin, or they failed to inform me that brand name was available. For some reason I think the shortages have more to do with DEA setting too strict of limits...

Starting to wonder if there is a similar medication, not affected by the shortage, that I can ask my pdoc about switching to..

Glad to see you back and to read this! The Big Ten didn't fare so well in bowl games!! Penn State, Ohio State, Wisconsin... I had to stop watching PSU to watch the warmup of the Flyers in the Winter Classic instead.

Clink - that's so awesome!! So when Jason and I were in St. Lucia, we went on a land and sea adventure where part of the day was snorkeling. I love the water - I'm like a little fish (rather than a duck) - I'd never get out of the water if it were up to me. However, I had an all out panic attack when we went snorkeling!! First off, I'm not used to swimming with flippers - while they propel nicely, I wasn't a fan of having something on my feet and trying to swim! It made treading water feel different and instead of looking like the experienced swimmer that I am, I looked like a drowning splashing nut. I think I did last 30 of the 45 minutes, but it was brutal, and Jason said I made it "not fun at all" because I was freaking out. They told us don't go near the rocks, and one time I inadvertently did because I didn't see it (my mask kept leaking and fogging up), and that freaked me out. Then I'd turn my head looking for Jason and inhale a bunch of sea water, but in order to clear it all out, I'd have to tread water with those dumb flippers. And then I wasn't sure if the flippers were close to an unseen rock and I'd end up getting stung.

I've always wanted to try scuba, but I'm just not sure that's a good idea. :-P My grandfather and uncle used to do it all the time - my grandfather has such wonderful stories of sailing and diving.

happy new year from the shrinks at http://pocketshrink.blogspot.com

This is a terrible problem when people who really need the medication can't get it. I don't think the solution is to force companies to make more. Supply will catch up.