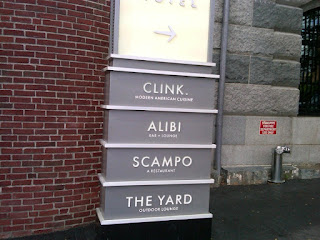 Shrinks don't join Facebook so much.  Why is that?  Today,  I will speculate about that on our Shrink Rap News blog over on the Clinical Psychiatry News website.  Please do check it out, the post is called Friend Me? Psychiatrists and Social Media.  I also give some suggestions to those who may want to try it out.  Roy will tell you that Facebook is a thing of the soon-to-be-past and Google+ is where it's at, but you have to start somewhere.


Of course, do "friend" us at
http://www.facebook.com/#!/shrinkrapbook

Do we have a Shrink Rap profile at Google+ yet?  Now there's a project for Roy!
Posted by Dinah on Wednesday, August 17, 2011

I have a friend who is a psychiatrist (not in private practice, if that makes a difference) and is on Facebook. We're friends from high school and undergrad, so I don't interact with her professionally in any case, but from what I have seen she uses Facebook in a purely personal way: wedding photos, keeping in touch with friends, and so on. She does list her residency/fellowship and employer, but I've never seen her post anything work related.

Age may come into it somewhat; we're in our early 30s, so it seems to be the norm for our group to keep in touch via Facebook.

We're all 7 years into Facebook, already. Pretty much everyone has made their peace with it, one way or another. There are a lot of ways to make it work for you. If you're not using it in some fashion by now, you aren't going to use it. The dangers are self-evident and clear. The interesting take on it would be a psychiatrist who friended patients and made that work in a positive way, without breaking with the ideology.

Anon: shrinks are behind on these things.
--Dinah

Oh, psychiatrists need remedial help and instruction in the means and ways of popular social interaction. Okay. Maybe your blogging helped them.

I've seen national social media consumer numbers ranging from about 27% to 37% in the 35-65 year old demographic in the US. If 22% of the psychiatrists in your poll use facebook, that is less than the national average, but maybe not much less at all depending on the age of your survey respondents. However, there's income and region (your survey was only MD?) and gender and all that other stuff to consider, before deciding that psychiatrists are underrepresented on facebook.

I hate to be the one to say this, and bring about this possibly harsh piece of advice. Anybody over 30 should not have facebook. It seems to me that it is a way for young kids to communicate and share pictures, but has unfortunately has turned into much more than that, taking over our lives and 'in person' communication.

At the age of 21 I do not have a facebook, twitter, or Google +. You ask why? It sickens me to see all of my friends constantly attached to their phone, computer, ipad, and any other electronic device social networking. 'Oh my god did you see what Kim Kardahsian just tweeted? That is f***ing hilarious!' Honestly, I don't give a flying you know what, and I ask why do you? Do you really care? And is that really much better than constantly posting status updates about what you're up to? 'I'm showering, then going to McDonald's, txt me.' If you had 'real friends' couldn't you just txt or call them.

Facebook started as a way to meet kids at your new college before you went, and was limited to college students with student e-mail addresses. Now you're friends with your mom, neighbor, anybody who decides to friend you, and your psychiatrist? These aren't your friends, and possibly not your even your acquaintances.

G+ does not allow pseudonyms, so real names are used. They have started "business" accounts for business names, though I don't know if it costs, etc.

"G+ does not allow pseudonyms"
Anyone who has had a Gmail account under a pseudonym can easily join G+ using that name. Google does not ask for reference checks or copies of birth certificates. The odd time they have asked for a mobile phone number before they will allow you to create an account but generally not. I am not sure how Google plans to enforce the use of real names short of making people who want to keep G+ give up a credit card number, mailing address etc. If they did that there would be very few people left on the site.

I'll say this for Facebook: When you're sitting there trying to digest the fact that you've just experienced an earthquake in Maryland, there are a whole slew of posts on Facebook to assure you that you haven't suddenly started hallucinating and the ground did shake for everybody else, long before anything turns up on any official news. ;-)

Facebook is not for all patients and even all psyciatrists. Some may benefit and some may be hurt. It cannot be a trend because medicine is not about trends.