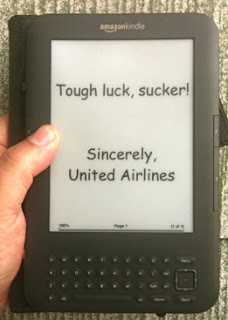 A few days ago, I ranted about how I was detained by security at an airport, then lost my computer.  I've put an update on the bottom of the that post: My Disasters, Natural and Otherwise.
So let me talk about my new friend, whom I've never met and whom I know pretty much nothing about, Steve Silberman, blogger over on Neurotribes.  Now I've never actually read much of Neurotribes, and maybe he express opinions that would make me feel ill, but when one of our readers pointed out the post called "Dear United Airlines: I Want My Kindle and My Dignity Back", I felt like I had found a soul mate in my distress over my lost laptop and the frustration I have felt in trying to inspire some sense of caring or empathy from TSA or the airlines.


The metaphor of frogs that don’t notice the water around them is getting warmer until it’s boiling (and they’re cooked) is only an urban legend, say the vigilant debunkers at Snopes.com — but it’s an apt image for today’s frequent flyers. Schlepping their carry-ons through security mazes, standing shoeless with arms outstretched in bleeping machines, shrugging off dramatic confiscations of shampoo and toothpaste, and frantically rejiggering carefully-plotted itineraries at a moment’s notice, we’ve come to accept the current state of affairs as just another way that life sucks in the post-9/11 era. Never mind that I’m old enough to recall when a cross-country trip on an airplane, even in economy class, offered an opportunity to unwind and feel coddled in the lap of luxury for a few hours with a stratospheric view. Now I look forward to flying about as much as I look forward to a trip to the dentist.


Okay, Steve, it was nice to meet you.

Email ThisBlogThis!Share to TwitterShare to FacebookShare to Pinterest
Labels: dinahrants

As a Kindle owner, I have alot of sympathy for this person losing his.

However, I feel that your situation and his are different. TSA didn't allow you to watch your stuff and as a result, you understandably forgot about your laptop. Even if you had remembered to retrieve it, there was still a good chance it would have been stolen because it was sitting there while you were being patted down by a TSA agent. No one was watching it.

While this guy was forced to switch seats all of a sudden, no one was preventing him from making sure that he had all his belongings. If I am missing something, please let me know.

Where the airlines deserves criticism is it seems they were not at all helpful in trying to assist him in getting back his Kindle. That is disgraceful.

It seems to me a big part of what gets to us is that there is a degree of sadism evident in the response of the agents. They know that the alarm was triggered by a mistake but still speak to you as though you are a suspect, which you are not as is evident by them not even caring about what you are bringing with you. Thet hide behind the regulations which are the vehicle or their sadistic impulses. Otherwise they would have shown some concern for your belongings, or at least for your concern!

AA: Not exactly the same, butI feel a kinship with the Kindle guy.

Jesse-- Nothing about this felt sadistic. It felt like everyone was operating by procedure, and the guy who barked "don't go near your stuff" was also the guy who quietly asked "did you move?...that's why"...the procedural flaw was that my stuff should have been brought over to me. But sadism is a strong word and no one watching would have said that I was treated abusively. I guess the question of intent depends on who has my laptop at this moment....

Liz, thanks, fixed it.