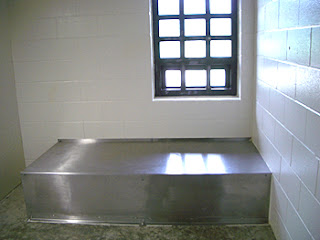 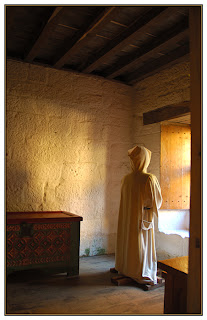 I've always been struck by the similarity between solitary confinement inmates and monks. Historically, monks were kept under the vow of silence. They could only leave their cells to attend religious services. The only visitors they were allowed to have were their religious advisors. (If any of you have seen the movie Into Great Silence you'll know what I'm talking about.)  The idea of the modern penitentiary came from this 'penitence' process: put someone in a room by himself, give him religious guidance while he's there and he'll reflect, repent and reform. This was how prisons were run in the Nineteenth Century too: prisoners were kept under the rule of silence and they could only come out of their cells for religious services or for work. No one ever alleged that monks became psychotic because of this though.

Then there's the psychiatric seclusion room. Again, a bare cell with a bed or a mattress, no visitors, no clothes except a hospital gown. There is no 'vow of silence' or 'rule of silence' though.

So what makes the difference between the prison segregation cell, the monk's cell and the psychiatric seclusion room?

Off the top of my head, the obvious one would be the 'voluntariness' (if that's the word) of the confinement. (Although some people became monks because it was either that or get thrown into the king's dungeon---crime did compel men into the priesthood!) Other would be the purpose of the confinement. Segregation is a disciplinary action for a misbehaving prisoner, although it could also be used to protect the safety of other inmates in the facility. The purpose of segregation is also, theoretically, reformation (and their is research to show that disciplinary infractions drop off after one or two episodes of segregation). Reformation and enlightenment would be the purpose of the monk's isolation as well. Psychiatric seclusion is used both for the protection of the patient and others.

As we've heard from some of our blog readers, involuntary segregation feels the same regardless of the purpose.
Posted by ClinkShrink on Tuesday, August 09, 2011

I'm all for crime being adjudicated swiftly, fairly, and according to rules of due process. I'm also for punishment distributed swiftly and certainly, as long as it is not cruel and unusual.

I'm having trouble grasping the identification of solitary confinement with cruelty. If, God-forbid, I'm ever incarcerated, please keep me the hell away from the other inmates!

wv = chingha. The sound the cash register makes when you've paid too much for a purchase.

Gotta say that you have an idealized notion about monks. They did stuff. A lot of stuff. For example, in middle Europe they brewed beer. The Augustiner's were strictly limited to consuming only 6 liters per day of their own production.

For the whole "getting divine guidance from solitude" thing to work, one must first believe in God, and believe that they can get something out of silent reflection and prayer. Even the monasticism-as-an-alternative-to-a-dungeon scenario, we're still talking about a time and a place in which most people were at least somewhat religious. In which a person who is isolated from other people would be less likely to actually consider themselves truly alone.

Also, if someone feels that they're being treated unfairly, then rather than reflecting on their situation and their life in general, they're more likely to ruminate on their anger.

Just how does religion work in prison? If it's government run or government funded, no particular religion can be actively advocated, right? It would be mainly religious organizations that would set up prison outreach programs? What about 12-step groups? I believe I've heard of the standard ones existing in prison, but given that almost nobody anywhere seems to have hears of it, I take it that Emotions Anonymous probably doesn't have any prison meetings? EA is the most applicable thing I can think of that could encourage reflection and individual spirituality without advocating a specific religion.

Anon, different orders operate differently. Almost all religious communities had some method of supporting themselves. One of those "keeps your hands busy with things of this world and your mind busy with things of God" philosophies. There were different degrees of seclusion and participation in the world.
So far as the beer thing, also remember that weak ales and beers were the standard thing that most people drank at the time, the way we drink water today. The alcohol killed most waterborn pathogens. Small ale was a great deal safer to drink than water in medieval Europe.

Hamlet: What have you, my good friends, deserv'd at the hands of
Fortune, that she sends you to prison hither?
Guildenstern: Prison, my lord?
Hamlet: Denmark's a prison.
Rosencrantz: Then is the world one.
Hamlet: A goodly one, in which there are many confines, wards, and
dungeons, Denmark being one o' th' worst.
Rosencrantz: We think not so, my lord.
Hamlet: Why then 'tis none to you; for there is nothing either good or
bad, but thinking makes it so. To me it is a prison.

It's an interesting comparison. I have thought of it before, particularly as someone who is both pursuing a career in psychology (eventual PhD) and has repeatedly been in-patient.

I've seen seclusion done in such a way that it is traumatizing for the patient (I've never been in seclusion myself), especially people I've known who are survivors of trauma. I think perhaps non-professionals who've never been in-patient don't realize that 90% or more of the time, someone in psych seclusion is *also* in restraint, or at least most of the people I've seen were. And the process of being forcibly restrained can be pretty traumatizing- hell, it's pretty traumatizing to watch.

As a survivor of trauma and torture, where one of the things that was done to me was periods of extreme isolation (being locked into small, often dark areas, or kept in places with basically no stimuli or human contact) I can say that *especially* going from an overstimulating, violent environment (as prison is, from all accounts I've heard) to non-stimuli- is both very difficult and is traumatic. Particularly when you throw in the fact that many people *in* prison have backgrounds of trauma that have never been recognized, much less treated. (I am not justifying their actions- I'm simply throwing it in as a factor).