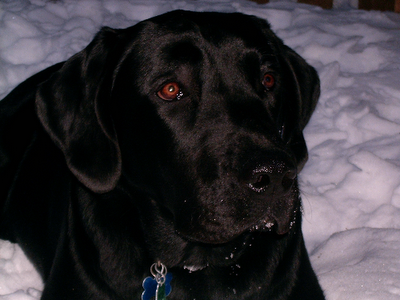 The timing couldn't be more perfect for an article in the New York Times on the genetics of compulsive behaviors in poochies.

In Scientists Find a Shared Gene in Dogs with Compulsive Behavior, Mark Derr talks about the work of Dr. Nicholas Dodman on doberman's who compulsively suck their flanks (hmm, what exactly does that mean?) and a genetic link:

Dr. Dodman and his collaborators searched for a genetic source for this behavior by scanning and comparing the genomes of 94 Doberman pinschers that sucked their flanks, sucked on blankets or engaged in both behaviors with those of 73 Dobermans that did neither. They also studied the pedigrees of all the dogs for complex patterns of inheritance. The researchers identified a spot on canine chromosome 7 that contains the gene CDH2 (Cadherin 2), which showed variation in the genetic code when the sucking and nonsucking dogs were compared.

Should ClinkShrink be worried? Might she adopt a dog with a psychiatric disorder? Should her would be pup have genetic testing? Derr goes on to write:

Recent rough estimates by Dr. Karen L. Overall, a veterinarian specializing in animal behavior at the University of Pennsylvania School of Medicine, suggest that up to 8 percent of dogs in America — five million to six million animals — exhibit compulsive behaviors, like fence-running, pacing, spinning, tail-chasing, snapping at imaginary flies, licking, chewing, barking and staring. Males with the problem outnumber females three to one in dogs, she found, whereas in cats the ratio is reversed.

Ah, but it's not just the poochies with this problem: other critters have compulsive behaviors, and treatment is available. Mr. Derr tells us:

Other domestic animals, notably cats and horses, as well as some of the animals at zoos, exhibit compulsive behaviors, including wool-sucking in Siamese cats, and locomotion disorders like stall walking and weaving in confined horses and pacing in captive polar bears, tigers and other carnivores used to ranging across large territories.

Although antidepressants, particularly selective serotonin reuptake inhibitors and clomipramine, a tricyclic antidepressant, and behavior modification have proved effective at controlling compulsive behavior in dogs and people, they do not appear to correct underlying pathologies or causes, Dr. Ginns said. Those causes are likely to be as varied as the compulsive behaviors and as complex as the interplay of multiple genes and the environment.

What is common to all the described animals with these "disorders"? They are in captivity. Stall pacing is a psychiatric disorder? Isn't it likely the animals would be fine if they had freedom to run and hunt and live as free animals?

A typical pet dog does not get sufficient exercise and they have energy to burn. In addition, they tend to spend too many hours alone.

If Dr. Dodman had any perspective, he'd have studied the effect of exercise and companionship on the exhibited behaviors of domesticated dogs.

My parent's dog has "issues." He is well taken care of, gets alot of attention, and seems to be happy most of the time. But he chews his legs alot, he compulsively chews on little bits of plastic (if he can find any) and he suckels his doggie toys when he is tired and in a happy place. He just seems like a dog with some psych issues (and may have a little inbreeding too). He is generally a happy dog in a calm environment in which he is never left alone for more than a couple of hours.

I'd like to know how they decided that all these behaviors were "compulsive." Does a dog chew because of a compulsion, or because dogs like to chew? It's not feeding a compulsion to buy your dog a chew toy, is it?
I'll echo what Sunny CA said about exercise and companionship, too.

Sunny CA: what you're missing is that all of the animals mentioned are domesticated animals, not wild ones. They have been selectively bred to live with humans; if allowed to "hunt and live as free animals" they would die. So your argument is fallacious.

Ladyk73: "Inbreeding" does not cause either behavioral or health issues. There may (or may not) be genetic predispositions to such problems, but inbreeding does not cause them.

Anonymous: you make a good point that there is no hard and fast line in animals between behaviors that are done for enjoyment vs. those that are done compulsively - but then again the same is true in humans. Addiction issues are a good example.

However, flank-sucking in Dobermans is an excellent model for the study of OCD in humans. It is a self-injurious behavior and therefore obviously maladaptive. It is by far most common in Dobermans and familial tendencies have been documented; therefore it was a likely candidate to be genetic in nature.

At the present time there is increasing use of dogs as an animal model for research into behavioral issues, various cancers, and other inherited disorders - good news for us that are dog lovers. :-)