Depressed And Staying That Way 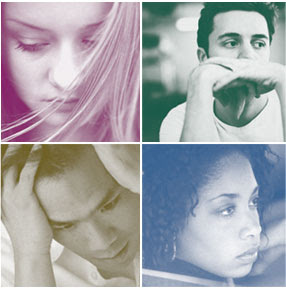 From the LA Times Blog: "Depression Treatment Lacking For Many People"
The post refers to a study in the Archives of General Psychiatry and notes:

Treatment for major depression is abysmal, according to a study published today in the Archives of General Psychiatry. In a national survey of 15,762 people, it found that only half of all people with depression received treatment. And among those who did receive treatment, only 21% were getting care that is consistent with American Psychiatric Assn. guidelines.

Oh, I'd like to read the full article in the hard copy, but my journals have so far not reached my new office.

Email ThisBlogThis!Share to TwitterShare to FacebookShare to Pinterest
Labels: depression

"45% of individuals with depression received psychotherapy with no medication."


This statistic is misleading. It makes it look like somehow all of them didn't have access to medication. There are people who choose not to take drugs after all.

I think the worst practice is the prescribing of anti-depressants by GP's with no recommendation for psychotherapy and little followup of any kind. A couple I know lost their house in Katrina flooding and now live in Oxford, MS. Their GP prescribed each of them anti-depressants. I don't know the husband well, but the wife is traumatized and non-functional in many areas of her life, yet feels that she sought and is getting help. My enthusiasm for psychotherapy is insufficient inspiration for her to go for therapy, though I think a word from her GP would get her into therapy. Her GP just renews the prescription. A mutual friend and I have also questioned if the dose is proper since an initial dose was given and never adjusted despite my friend's continued depression.

As some commentaries have noted, the issue is not so much access as it is the very limited effectiveness of psychotropic medications (which isn't to say that they're useless). Why the trend toward ever more baroque medication combinations? An amalgam of excessive expectations and the fact that *the medications just don't, on average, work very well.* Recalcitrance in (significant) mental disorders is the rule, not the exception.

It’s curious that people become depressed after adverse life circumstances and are then deemed to be suffering a "chemical imbalance" and treated with medication.

I think it's great if even 45 per cent are getting therapy. Way more likely to help on a long term basis. Provided that that statistic is for care provided by MD's, psychologists or clinical social workers. Just about anyone, after all, can hang out their shingle and call themselves a therapist.

In my family, where there are multiple generations of people whose mood disorders have not responded to meds, the only people in the family who have been ill but still function well are the ones who have had decent psychotherapy, sometimes in combination with meds. Of course, some might argue that the sicker ones refuse to go into therapy....

What I have seen in my family is that the bipolar relatives' depression is NEVER adequately treated, because of their GPs being so terrified of making them manic by trying adequate antidepressants.

It's interesting (but not surprising, given the corrupt practices of big pharma) that some of the older, less glamorous meds often work well as a last resort on treatment resistant depression. Lithium augmentation of an SSRI can do more to banish suicidal thoughts in some people than almost anything. And sometimes the maligned MAOis can lift an intractable depression.

Using the atypicals in addition to an SSRI is okay if the doses are very low (to boost the effect--it helped one relative a lot), but they are horribly expensive and have terrible side effects of weight gain and cognitive blunting.

I'm no MD or pharmacist, but I have spent a lifetime caring for relatives suffering from this.

If depression is a spectrum of mood disorders then why make generalizations about treatments? "Only 34% received anti-depressants". This seems meaningless without reading how effective they were. Especially when treatment is said to be "abysmal".

I would hope that concurrent psychotherapy or counseling is being offered with the pills. Yes, I've seen those little pills save lives, but do they have to be a lifelong committment? I don't think so...

Having fun...can we add amoxicillin to the mix since in the ER, patients think that cures everything? :)

ADs don't work. I am really shocked at how "doctors" hand them out to people too.

Dinah, you can go to go to APA website and login to view your AJP articles online.

I haven't read the article, yet, but Tales is right; the statistic all by itself is misleading.

But the message is right on target: not enough people suffering from Depression get help, irrespective of the type of help. For many, it's from lack of access to health care. Or stigma.

For example: I saw this shrink and within 15-20 minutes he had given me samples of Ambien, Lexapro and a scrip for Xanax. I consider all of those drugs to be very dangerous and Ambien and Xanax are very addictive. Lexapro has a discontinuation syndrome. His office reminds me of a Worker Comp. attorney's office in Los Angeles: filled with people and in/out real quick. Lately he has suggested ECT. I've never taken an AD and never would. From my observation, as a layman, psychiatry has let patients down.

I enjoy being here I look forward to seeing your posts :)