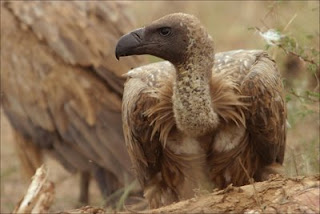 This a blog post about vulture poop. It's a long story, but let me just say that when you're a rock climber there are certain hazzards of the sport that you just have to accept: bats sleeping in crevices, nasty long spinning falls, copperhead snakes and, yes, vulture poop.

Vulture poop is probably the most vile smell I have ever come across, and that includes a four month stint crouched over a formaldehyde-soaked corpse in anatomy lab. It's bad.

The trick with writing a blog post about this is that you have to tie it in somehow with psychiatry. This is problematic since I haven't had any patients with delusions about vultures, vulture obsessions or vulture phobias (does anybody know the word for vulture phobia? Ornithophobia is for birds as a whole). I'm left grasping at nasal straws, so to speak.

Olfactory hallucinations can be seen in other medical conditions, specifically in migraine sufferers and in people with seizure disorders. In this case the smell generally precedes the onset of the headache or seizure and is sometimes described as a 'burning rubber' smell. Treatment of the odor depends upon control of the underlying condition.

So there's my vulture poop post. I even made it relevant to psychiatry. Climb on!

And for those without cathartophobia (my proposed name for vulture fear, after the genus cathartidae):

I wanted a picture of the poop!!! not the bird.

shrink on the couch said...

Had no idea. Now I know.

As for olfactory reference syndrome, I believe my husband has a small touch of this. There is absolutely no basis. In fact, most Americans have a touch of this, given every kind of spray and personal cleanser available.

Very interesting post. What is the experience of waking up and smelling smoke, or anything else as though it were real. I ask because one time I woke from sleeping, went to the washroom and smelled smoke so clearly that I thought the house was on fire. the smell went away fairly quickly, but I walked around, and around the house listening for the crackling of a fire, and trying to smell it again.

The next night I woke again and went to the washroom and I clearly heard two people talking outside. I was sure some one was breaking into my car. The noises went away quickly again, but they were so real I went to the porch, turned on the lights, turned the lights on in my car, but n one was there. Are these hallucinations, or was I still dreaming while awake? Just curious.
...aqua

Now, if you were climbing and hiking in the HIghlands and Islands of Scotland, the main hazard would be sheep poop. Not that smelly, tho.

There are some people like my dad, with a hyper- acute (not hallucinatory) sense of smell that stood him in good stead growing up in the Far East (detecting spoiled food) but that made him an obnoxious guest or diner as he would be smelling things on the point of going off, that others had enjoyed until he mentioned his doubts...

He later lost his sense of smell as a result of a brain tumor, and complained (tho his life was saved by neurosurgery) for the rest of his life that nothing tasted much of anything any more.

I have read that many people lose their sense of smell because of head injuries, even a bang on the head?

I have more of a problem in my daily life with cow poop.... big steaming, blackish-greenish oozing splotches on hiking trails near my house. Then there is mule piss. A hike down the Grand Canyon's Bright Angel Trail in 100 degree weather past 10-foot-wide "lakes" of evaporating mule piss is less than the wilderness experience most people expect in a national park. I haven't seen vulture poo.

I'm not sure about vulture droppings, but I guess as meat eating birds of prey there's gonna be an aromatase component (=big stink). 2009 is Darwin's 200 birthday, so I can't help but thinking there must be a survival advantage here. Big smell is bound to repel some animals perhaps leaving more food for those with less delicate noses.

I can certainly share my experience that after several months working with formalin fixative, my sense of smell is abysmal and my papate is affected. No serious foodie or wine snob should work in the path lab.

I think most psychiatrists should sleep with their non-vulture-like patients!! Look at Paul etc it's definitely a good idea to get those difficult feelings out of the way early on!! Shag, I say then your therapy will progress much better (and there'll be no need for any games!)= perfect!

YUPI AGREE LADY.......ALL PSYCHIATRISTS THINK ABOUT AND WANT IS SEX ANYWAY!!! SO GIVE IT TO THEM I SAY!!

In my limited climbing experience I have had to fortune of only encountering squirrels, a small, harmless snake, a distant bear, and cobwebs (no black widows or rattlers thankfully). Anyway, I looked into the mythology of vultures and among the many references, likened the following descriptions to climbing (one of them actually mentions vulture poop):

“Vulture comes into our lives to teach us the hard lessons of energy conservation. Are we expending too much of our own personal energy? Why aren't we using the bounty of the earth, always given, to support ourselves?... vulture teaches us that we have this ability to be supported by nature, and to master how we are mastered by energy.”

“…show us ways of negotiating problems that do not expend our personal energy and keeps us in peak condition.”

“We might have an unhealthy fear of death and decay. Sometimes people revile vultures because of the 'dirty' lifestyle they lead, eating death and excreting it. Like the hyena, vultures smell terrible and constantly remind us that one day we will die.”
http://www.wildspeak.com/vilturj/totems/wvulture.html

I admire vultures for their uniqueness. Plus, they can projectile vomit.

I'm not sure how the conversation got from vulture droppings to sex with your psychiatrist, but personally I think both are on the nose. Of course I wany my psych. to desire me, but if he did try anything I would be scared sh%%%%%less.If he did he'd be just like every other guy. For 220 bucks an hour I want his vulture tucked away thanks very much and liberal use of deodorant

Christina Boffen said...
This comment has been removed by a blog administrator.
April 01, 2009