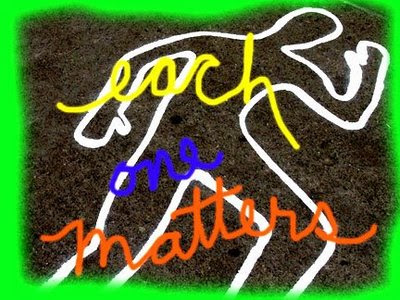 This is a question that struck me after one of my patients, a convicted murderer who violated his parole, said to me: "I don't feel good about the fact that I'm a killer."

For some reason that statement just struck me and I'm not sure why. Of course someone would feel bad about killing. Sociopaths don't, but most normal non-sociopathic killers do. I think it hit me because my patient's offense had happened over a decade before and he had done well on parole since his release. He was really sad about what he had done and was trying to make things better.

The fact of the matter is that all killers aren't the same. You have the barfight killers, the enraged jealous lover killers, the cold and calculating hit man killers, the child abuse killers, the sadistic serial killers, the drunk driver killers, the school shooting killers, the newborn infant hidden pregnancy killers, the "teenager who kills his entire family" killers and so on and so on. Everybody's different. Ever since the middle ages and the old English common law, killings have been broken down into different categories of murder and manslaughter so that killers would be punished in accordance with the type of killing they're guilty of.

But back to my patient. The question that came to me was, "How do you handle the guilt of being a killer?"

Is it like dealing with grief in the bereaved, where you never really expect someone to just 'get over' something? Is it something you just have to learn to live with? Do you tell the patient that they're now obligated to live the rest of their lives paying their debt to society? Is there a point where the guilt should end? Or is the person really obligated to spend the rest of their life beating himself with a knotted cord? What good does that do?

It's a matter of public record that the Emmy Award-winning actor Charles Dutton was an inmate in our correctional system back in the 1970's for killing someone. To my knowledge he's never been in trouble since then, he's turned his life around, and he's contributed a lot to society since he's gotten out. Most killers don't put their pasts behind them quite so successfully. In my experience a killer who successfully has turned his life around is someone who gets out, has a job, has a place to live, has people who love him and who doesn't commit too many more crimes. It's a bit much to expect someone to never get in trouble again---life is weird, circumstances happen beyond your control and bad reputations throw a long shadow---but at least it shouldn't be another violent offense.

When I was reading the first line, I was expecting it to read "for the families of the victim". They are the other crime victims.

I wonder if those killers who feel "guilty" might partially be feeling sorry for themselves. Sorry they were caught, sorry they have spent the time in jail, sorry they are on probation, sorry their lives just are not what they would be at this point in time if they had not been CAUGHT.

What about the privileged killer who gets away with it or is rewarded for the killing (Henry VIII; "Crimes and Misdemeanors" 1989 Woody Allen film). I suspect you'd have a different perspective if somehow you were able to talk to the killers who were not caught.

It is so cool that you have this special service that finds graphics for your blog posts and edits your journal pieces.

When murder suspect Keith Phoenix confessed to the hate crime slaying of Jose Sucuzhanay, his shocking first words to cops were: "So I killed somebody - that makes me a bad guy?"
He thought the victim was gay you see. Some percentage of the US population would agree with him.

I think I may have the capacity for homicide. If it was the only way to stop something like this from happening again. I'd exhaust every other remedy first though. Starting with all the legal ones. Even if I knew I could get away with it. And if killing was the only way, I'd turn myself in afterwards. Society can't let vigilantism remain unpunished. If someone kills someone because there's no option, then they must accept that their punishment is also necessary.

I wish I could say this was an isolated incident, but I've been on Intersex support groups for too long. The only thing exceptional here is that the mother managed to get the pathology report. A lot of Intrsexed people feel a justifiable paranoia when it comes to the medical profession. Too many have had organs removed, have been castrated or sterilised, and their medical records "lost", "for the patients' own good".

Getting back on topic...
How does one forgive oneself for doing something unforgiveable? Even if one was "not of sound mind" at the time, say, due to post-partum psychosis? I have some experience of how dramatically fluctuating hormone levels can lead to not thinking straight. there were times when I had to ignore my feelings, and think "what would somebody sane do?" and go with that.

How do you make restitution when no restitution is possible? I guess you just have to do as much as you can.

I've been told by the people concerned that I've saved a few lives. Work I've done on logistics modelling probably saved tens of thousands in the Aceh earthquake too. But that doesn't give me the right to kill anyone, there is no calculus of morality there.

People in that position just have to do their best, I guess. As does everyone else. And ironically, it's the ones that least deserve to suffer the pangs of conscience who suffer the most. What can you do for chronic situational depression and suicidal ideation in such circumstances? Because such feelings would not be irrational, a sign of mental health rather than illness.

For the ones who honestly feel horrible about what they did, that is just is very, very sad.