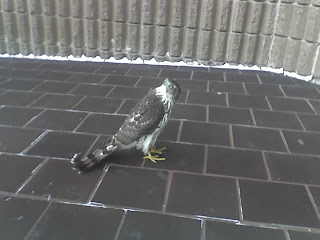 I was on the way home from prison the other day when I saw this bird lying belly down on the sidewalk. At first he was lying on the sidewalk with his wings outstretched and his tail straight up in the air like he had been crunched by a 50 pound Acme weight. After a while he stood up and started shaking his feathers out and stretching his legs. He was still sitting there when I left but it looked like he was getting ready to fly. I called wildlife control and they said hawks in the city will fly into buildings chasing pigeons. There are a lot of pigeons in the parking ramp where I work.

So why am I putting this up?

A friend of mine says it's a falcon, not a hawk. If there are any birders out there who can make an identification I'd appreciate it.

Posted by ClinkShrink on Saturday, November 03, 2007

Harry thinks it's a Peregrine Falcon. I do too.

FYI, birds will lay "spread-eagle" in the dirt or ground for two other reasons. One is if the ground is warmed by the sun and they are trying to warm up. The second is to get dust in their wings, which I understand helps to control mites. (I guess the third could be smashing into a skyscraper.)

Hmm...the wide bands on the tail made me think it might be a hawk. The wildlife lady said there are Cooper's hawks in Baltimore, but I wouldn't know the difference.

I'm just glad we've got a natural predator around to deal with those pigeons who love to make messes on my car....

You are obsessed with that damn bird.

Why did your friend think it's a falcon?

If you saw it's wings outstretched:

falcons (Peregrins, Kestrels, etc) tend to have really pointy wing ends when outstretched. And their wings are a tad narrower front to back.

The tail seems more strongly barred than I expect for a Peregrine; that's what makes me think Merlin. But Merlin's are scarcer than Cooper's, though maybe near the coast?

And, of course, it's migration season, so a bird might be where you don't expect it for a short time.

If you look at the Cornell University ornithology site, they've got great bird info. http://www.birds.cornell.edu/

Thanks Bardiac. I'm afraid I was too busy being in awe to get a good look at the wings. The bricks are big, about ten inches.

Say, have you read 'A Thousand Acres' by Jane Smiley? It's King Lear reset in the rural Iowa countryside in the 1980's. It won a Pulitzer. A friend gave it to me recently but I'm having a little trouble getting into it.

Dinah: I'm not obsessed with the bird, just with figuring out what it was. I was so sure it was a hawk, I never considered a falcon. It won't take the place of our support duck.

It will, however, happily EAT your support duck! So careful!

With the size, then, I'd guess Cooper's Hawk is the most likely guess. They're also bird hunters, so that would make good sense with all your pigeons around.

I would totally be in awe, too! Hawks are stunning!

I want some soup

I don't know much about US birds, but based on the size of the bird, the feet and the tail...my guess would be that it's a hawk.

Young raptors quite often wind or concuss themselves while hunting - they are so intent on the prey that they forget about watching out for stationary objects. Like buildings, or trees.

My boss reckons one of the indicators of my insanity is that I raise those damn pigeons! When they fall off the building or get removed from the roof? the fat little handfuls get brought to me, I lavish love and food on them, and then send them out to do what pigeons do best....eat, poop and make more babies!

Sweet! Hawks and falcons and any predator bird like that, are awesome to watch! They'll circle overhead here, just floatin' on the thermals rising from the desert.

There was this one time at band camp, I mean, while camping on an island in the middle of the Salt Lake, that I looked overhead and saw these huge, white birds, that were different than I'd seen before, wheeling in unison above us. They were pelicans! It was so cool to see a bunch of them (flock? gaggle? etc.) at once! This was before Finding Nemo, in fact, I was pregnant with my daughter at the time (I'm never going camping whilst 5 months pregnant, again!)

I miss the Eastern birds we don't get out here (spent 10 years in New York State). The cardinals, and ones with funky calls, and stuff. I think once in a blue moon a cardinal has been seen around here, but practically never.

Then there's the huge 'ole vultures, when driving to California.

We missed the 100 year bloom of Death Valley by a couple of weeks, darn it. I bet more birds would have been there, then.

There's a big 'ole white owl (well, in the winter it's white, at least) that lives in a tall tree about 20 steps from our front door, behind the apartment. Sure scared the HECK (or as my daughter would say, SOME of the heck) right out of me, one night, when I heard the strangest screetch and wierd sounds, to look back and see that it was hopping off with it's prey behind a car . . . sounded like someone was killing a cat (which, I suppose, it could have been doing, perhaps.)

It made me sad when they bult something in the field next door, paving it over, because that was likely a major source of mice and (shudder) rats and the like, for it.

He's beautiful. I would have been in awe if I came across him like that. It's rare to see a predator up close.

Just stay away from my doves :o)

I don't think it is rare to see a predator up close.