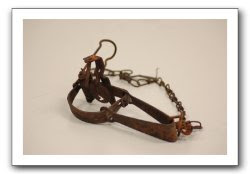 "I can't get Dr. ClinkShrink out!"

That is probably the number one item on my list of phrases I don't want to hear in prison. I heard it yesterday as I was on the wrong side of a locked door, at the end of the day, trying to go home.

It was a bad day. It started out bad, it stayed bad. I was 45 minutes late getting to work because of firetrucks blocking the highway. I saw a boatload of patients in the morning and as I was leaving a nurse ran behind me trying to get me to stay and see more. I miraculously finished my afternoon clinic on time, having seen all but two scheduled patients. A miracle, given how late I started.

Then the key jammed. I stood on one side of the door, the officer stood on the other side of the door twisting a key in the lock, stripping the cylinder, bending the key, yelling, "I can't get Dr. ClinkShrink out!"

I was stuck on the floor with three other civilians while they tried to find the keys to the back stairway. They found the keys. They directed us to the door leading to the stairway. They discovered there was no keyhole on the side of the door that the officer was standing on---with the key. I vaguely wondered what would happen if a fire broke out just then. I put the thought out of my head. I spent my time feeling grateful I wasn't stuck in the elevator like the last group of trapped civilians---fifteen in all caught somewhere between floors---when all the elevators broke down at once. No one could find the stairwell keys then either.

Then it occurred to me that standing behind a locked door at the end of the day was the most peace I had had all day. Next week I bring a support donkey.

Posted by ClinkShrink on Friday, November 09, 2007

So how did you manage to get out?

Let me guess... a baseball and a bat?

Someone finally managed to get the key positioned...just so...and it opened. I don't know if I'll be able to get back in on Monday...we'll see.

A support donkey! Sometimes it is having a sense of humor that keeps us from going crazy. I was "trapped" with 50 elementary students today for a children's musical practice and this story made my day and reminded me about support donkies whch was another story they I thought was hysterical. Sorry for the trauma to you, but I think you've found the solution in the humor.