Suicide Rates Shoot Up in Youths

Dennis O'Brien reports in today's Baltimore Sun that the suicide rates in children and adolescents have increased since 2004, after over a decade of decreases. It was in 2004 that the US FDA decided to add black box warnings to antidepressants stating that they may increase the risk of suicide or suicidal thoughts. Many speculate that the sudden and dramatic increase is related to the 22% decrease in antidepressant prescriptions in this same population.

As noted in our review of a June 2007 AJP article in Podcast #26 (Black Box Reloaded), there was a 58% drop in the expected number of antidepressant prescriptions for kids after the black box was added, while the proportion of depressed children who remained untreated with antidepressants increased some three-fold, going from 20% to 60% (see dramatic graph). At least at last year's FDA hearing, they decided to make a more measured warning, noting that antidepressant medication treatment can be protective and reduce suicidality, as well.

Among people ages 10 to 24, the number of suicides jumped from 4,258 to 4,599 in 2004, the most significant rise in teen suicides in 14 years, according to a report by the Centers for Disease Control and Prevention. That reverses a 28 percent slide in suicide rates for the age group that began in 1990.
. . .
"There's been concern that the black box would lead to a reduction in prescribing and therefore an increase in suicides, and my guess is that's what's happening," said Dr. Mark Riddle, director of child and adolescent psychiatry at the Johns Hopkins Children's Center.

Some doctors are reluctant to prescribe an antidepressant to a child if it comes with the FDA's most stringent warning label, Riddle said: "People see it as a potential feeding frenzy for the malpractice lawyers and it's just scared the clinicians off."
. . .
But other outside experts were reluctant to link the black box warnings with a one-year rise in suicides. . . "There are so many social issues that go into suicide rates and how they're reported."

We also reviewed two other articles (Simon & Savarino and Gibbons et al) about the timing of suicide and treatment in Podcast #30 (Parity Feels Like a Bird). These articles point to increased rates of suicide attempts prior to the initiation of either antidepressant or psychotherapeutic treatments. 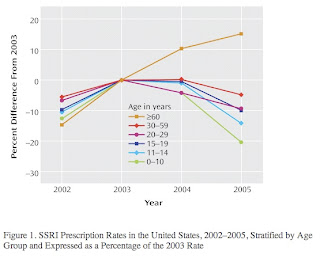 (a different article than the Gibbons article above) that is mentioned in the Baltimore Sun story provides data on reductions in antidepressant prescriptions by age category since 2004, clearly showing that the reductions are most pronounced in the youngest age groups and become less so with older groups. The only group with an increase in prescription rates is 60 years and older. This is the age group which the FDA has found to be most clearly protected by antidepressant treatment.

The article, entitled "Early Evidence on the Effects of Regulators’ Suicidality Warnings on SSRI Prescriptions and Suicide in Children and Adolescents," concludes with the following warning:

In December 2006, the FDA’s Psychopharmacologic Drugs Advisory Committee recommended that the black box warning be extended to cover young adults, and in May 2007, the FDA asked drug manufacturers to revise their labels accordingly. If the intent of the pediatric black box warning was to save lives, the warning failed, and in fact it may have had the opposite effect; more children and adolescents have committed suicide since it was introduced. If as a result of extending the black box warning to adults there is a 20% decrease in SSRI prescriptions in the general population, we predict that it will result in 3,040 more suicides (a 10% increase) in 1 year (17). If the FDA’s goal is to ensure that children and adults treated with antidepressants receive adequate follow-up care to better detect and treat emergent suicidal thoughts, the current black box warning is not a useful approach; what should be considered instead is better education and training of physicians.

My p-doc reckons he has had one clear case of suicidality appearing with an AD where it didn't exist before - patient was an adult male < 40.

He also said that he has lost count of how many hundreds of patients of all ages have not killed themselves, primarily because of taking an AD.

The FDA took what looked like the easy way on this one, and the figures are now proving them wrong.

You're right about it being speculation. You can't assume causality with this kind of association. It's just facile to show a blip in the epidemiological data in a given year, and then say "hey! x happened that year, too! therefore, x causes y."

Compared to controlled, randomized studies, this kind of data is not very meaningful, only suggestive that further investigation is needed.

e.g. Even if we could show that the increased suicides were among kids who were not receiving antidepressants, you still need to know what happened to the rates supportive therapy. Was antidepressant treatement being replaced with anything, or were these kids just dropped out of treatment altogether?

If I am correct the black box warning came about in Oct.
2004.
So is everyone claiming in 10 weeks everyone decided to kill themselves.
Something else was going on here!

The first anonymous is right, association does not prove cause and effect. After all, I think the bee population also started to plummet after the black box warnings were added.

However, in this situation, the numbers and multiple lines of evidence are starting to point strongly in this direction. For now, let's just say the Black Box is "a person of interest."

Responding to the 2nd anon, the initial FDA report actually came out in October 2003. In February of 2004, the first FDA Advisory Committee meeting on the topic was held.

In September of 2004, the second meeting was held.

So, the timing of the increase in suicides is consistent with a beginning reduction in antidepressant prescriptions starting in late 2003, initiated by the 10/27/2003 FDA report.

1. you're using anonymous comments on the blog again? huh?
2. what happened with the Sunday podcasts? I always look forward to my monday morning workout so i can listen to you guys.
3. funny random thing - i saw a porsche SUV today with the license plate "SHRINK"... I'm pretty sure it wasn't one of you three.

Rach, good bet it was none of us in a Porsche SUV. Sorry about the Podcast glitch, Roy had an unexpectedly hectic weekend and he puts them up, there are a few already made. We got some feedback from folks who weren't commenting because they used to do so anonymously. It's a re-test drive.
Please, Anonymous Commenters, pick a handle to sign at the bottom of your posts so we can follow who you are. If it gets troublesome, we may stop.

'Freakonomics' has an article about how abortion has increased the relative number of conservative voters. The FDA black box is at the behest of Joe Barton R, TX who controlled FDA appropriations until last year and who, before bellowing that he wanted an answer to the suicide danger of antidepressants, had cut off funding to the office an FDA official who had the temerity to testify for Pfizer over a suicide case. It's only sporting, but I'll admit to being at a loss for adjectives, 'antiRennaisance, antihumanism, antiscience' do come to mind also, that anonymous, dare I say Republicans, philosophically instruct, 'You can't assume causality with this kind of association.'

To "Psychiatrist who learned from veterans:"

I'm the anonymous who "philosophically instructed" that you can't assume causality with this kind of association.

I'm not a Republican. I'm not anti-science, or anti-humanism. I'm a progressive, and I'm pro-rationality, and pro-science...to the extent that I have to urge caution - extreme caution - with the kind of interpretation Roy is making here. Roy understands that. I'm not sure why you don't.

If anything is anti-science it's making careless assumptions when interpretating data, and drawing conclusions far beyond what the evidence can bear. That's an abuse of science, and it ruins scientists' credibility in the public mind.

So there! Actually I think we can use Republicans in many situations, e.g the response to 9/11. I think you would be misinformed to think however that the black box warning represented the best scientific and public health policy per the FDA and that you are defending that. It represented their best mandarin response to outrageous intrusion by the committe chairman Joe Barton, R. Tx, leaving guideposts in the best retreat they could write.