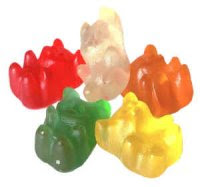 When it gets to the point that I'm repeating myself I think I may have been a blogger too long. Roy's post on the nursing bears spurred me to do this post about a new rehabilitation program that was featured in our local paper recently. I'm commenting on this at the risk of looking like a cynical cold old coot, but at least I'm consistent. I had the same reaction that I had when writing my old post Gummy Bears and Jail Babies.

The program is called Chrysalis House Healthy Start and it's designed for nonviolent pregnant inmates. The theory is that instead of serving time in a jail or prison, the pregnant inmate gets released to a house in free society where she learns to be a parent. It was funded by a $675,000 grant and is being run by a coalition of non-profits.

One of the first two occupants mentioned in the story is a drug-addicted prostitute who was pregnant for a second time after having to give up custody of her other child, a two year old son. The program uses the services of several professionals: a nurse, two behavioral health clinicians, a social worker, day care assistants and a life skills counselor. According to the article, they are encouraged to "meditate, set life goals and raise self esteem". Apparently it also involves field trips: after the first residents moved in they all took a trip to the National Aquarium.

OK, here comes the cynical old coot part: will they teach family planning? By the time they leave the program, will they be able to spell or to read? Will they be educated? Will they have any job-seeking skills? If they actually require six professionals to be a parent while living in the house, perhaps foster care is not such a bad idea instead, at least until they can show they don't need to rely on six professionals? Why is it necessary to turn a baby into a rehabilitation tool?

The Healthy Start program is a replacement for a previous program that failed called Tamar's Children. Tamar's Children shut down in part because of concerns about the quality and nature of the therapy being given to these women. I saw nothing in the newspaper article to suggest that the new program would address this concern. If they are truly seeing a trip to an aquarium as a therapeutic intervention for bad parenting, I'd like part of my $675,000 tax money back.

Posted by ClinkShrink on Wednesday, September 12, 2007

Well here's the closest thing Philadelphia has to that : My Sister's Place of Philadelphia

However, before anyone roasts me over the coals - this is not for women who should be in jail. It is for women with substance abuse problems who need some sort of not-exactly-inpatient-but-very-strict-control and can have their kids live with them, babies included.

Interesting, this stuff... It's amazing what you can do these days and still keep your kids. Sometimes people do give the excuse that they had a baby to fix their lives. I find that to be very sad.... I feel bad for someone who has a baby to have someone to love them. I'm pretty sure that almost never works out the way they planned...

Would have more to say, but not here!

How do I get into a program that pays for me to take Max to the aquarium?

Ok, but what are the alternatives? Foster care? Not all babies have grannies who want to take them, or who would be good caretakers. Or fathers who would do more than hand them over to their current girlfriend to watch while they went about their lives as usual.

Given the fact that good foster parents are hard to find, it seems to make sense from a strictly pragmatic point of view to give a birth parent the chance to look after their baby. If they want it, that is.

Even a parent with marginal skills at best, even in a bad situation. Because the alternatives are not necessarily better.

I guess that's another thing that bothers me about this program. It seems to assume that fathers can't or don't want to bond with their children. I have men in my clinics who are new fathers, but they are not given time out of prison for parenting classes and self-esteem building. And yes, I do think foster care would be a better alternative than living with some of the female inmates I've treated. The foster care system seems to go to great lengths to return children to people who just will never be equipped to raise or care for them. And I've seen too many newspaper stories of dead children who were supposed to be monitored in the home by child protective services.

I agree with everything you say. My thinking is that availability of foster care does not always match need, and that while some prison inmates will never be even marginally adequate parents, others will or can be.

An alternative to coaching parents is to skip foster care and go straight to adoption. Born in prison? Excellent! Your mother can be isolated and given regular drug testing, and you can be a certified non-crack-baby and go straight from birth into a Forever Home. (A friend in New Jersey got a healthy infant this way. NJ children are removed from drug-addicted parents and immediately placed into fost-adopt. An unintended outcome of this practice is that mothers immediately get pregnant to try again, to try for a baby they will get to keep. So perhaps legally mandated sterilisation of any bio parent of a child who has been placed into foster care?)

Oh - one point of disagreement with you - the aquarium. I actually think that sounds like a good thing. If your parents never took you anywhere, then how do you know what it's like to take a child somewhere? How would you know it's one of your options?

Kind of like sitcoms. I have heard many accounts - including my ex's - of the Brady Bunch being a beacon of hope growing up. That learning that not all parents are vicious drunks helped them understand that their unhappiness with their home situation had more to do with their parents than with them.

Biggest point of agreement: the need for serious evaluation of any project, continued or not, so that we can learn and apply what we have learned the next time. And that any ongoing project needs constant feedback from ongoing evaluation.

What is troubling to me is that I have seen similar programs in NY and I see similar programs here in CA, and they (apparently) are based on a significant amount of conjecture as opposed to actual research. I can't help but imagine that it is significantly more cost-effective to keep women out of jail, and treatment is better than no treatment at all, but is any of this efficacious?

You can only cringe at the former law in MN that forbade adoption of minority children by majority prospective parents. It was lobbied hard that children essentially need their cultural and racial identitiy. This was until the state conducted its own independent research and found the presumption was completely inconsequential and a sustained myth.

Maybe the field trip should have been to the county jail...

Is any treatment better than no treatment? Remember that this is a reincarnation of a previous program that was closed because of concerns about the nature of the therapy that was being given. The article says that the program will manage depression, but there is no reference to any psychologist or psychiatrist involvement.

As for the field trip, my preference would have been to a library. Or to a school. Or a pediatrician's office.

Very compassionate. And who provided the grant? Because depending on where the money came from, it may not have come from ANY of your tax money. Would that make you feel better?

I think there are awful, terrible parents out there, and yes, family planning basic literacy and other education are paramount in a program like that. But believe you me, you can have all the knowledge in the world and still be a horrible parent.

And as neonursechic said, people (both women and men do this) have children to fix their lives. Not just poor women or addicts. Unless you are willing to foster children, you shouldn't be so quick to send them into the foster care system.

Just a quick comment...be careful how many conclusions you come to based on information you read in a newspaper article. Newpapers are often biased, have their own agenda, or put their own spin on things. TAMAR's Children closed for a number of reasons, most of which were political. The Chrysalis House Healthy Start Program is being run by a completely different collaboration of agencies who are providing a wide range of services (prenatal care, addition and mental health treatment, parenting skills training, life skills training, job training, etc.) to women and their babies. And, yes, there is an evaluation component to this program so quantitative outcomes data will be forthcoming.

An article can not give all of the details. So here are the facts: the women who volunteer for CHHS, must first be willing to make a one year comittment; to be released to the program there must be a court order. CHHS is a statewide diagnostic and transitional program that provides: prenatal and postnatal care, psychiatric services, subtance abuse counseling and treatment, parenting skills, life skills (job readiness and yes exposure to new places such as the aquarium), nursing care, day care, and trauma services for women with emotional scars that run very deep, and encourages spiritual growth. The program is in place to empower women, set the foundation for recovery from addicton, deliver healthy, drug-free babies, and develop strong families. The fathers are involved (they just don't live there), some more than others, the families are involved (family education and counseling is offered). Every human being deserves the opportunity to grow and change, we don't all have the same opportunities, advantages, and support systems...this is about an innocent human being coming into the world, this is about showing women another way to live. The program has over 20 years of experience serving women and children and their families. It's always a good thing to know the facts...CHHS is not affiliated, managed, or operated as Tamar's was. It is a 12,000 square foot facility that has a caring and well-qualified staff and partners with many years of experience serving the community. Tamar's did help a good number of women and families. Let's not throw the baby out with the bath water!