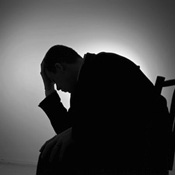 I never know what to say anymore when people ask me, "Why?"

I'm sure people probably expected me to post something about the Amish shooting this week, but I just couldn't. A number of respected forensic psychiatrists were quoted in the media and have already said what could be said about the situation---no one will really know the true motive, recovery will take a long time, yadda yadda. I have little to add to that. You know a crime was bad when even the criminals were asking me, "Why would somebody do something like that?"

It's interesting that people don't usually ask "why" when somebody does something good. My post on Hazardous Duty is the exception to the rule. People ask "why" over positive acts when those acts carry great risk to the person doing them or require an extraordinary sacrifice. Unfortunately, the bad event "why's" seem to outnumber the good event "why's" more and more often these days. I think it's OK once in a while for a psychiatrist to just say: "I haven't a clue."

People are going to want me to have some answers again soon. Someone in my neighborhood committed suicide last week. Being the neighborhood mental health person, I heard about it almost immediately. Not being a close friend of the decedent, I'm again in the situation of saying little when there's nothing to be said---people have already said it all: "What a horrible thing to do to the family" and "Why did it happen now?" (as if there's a good time for this).

I wish I could package up all these reactions and hand them over to certain select patients. Once in a while you get a patient who talks about suicide so casually it's like they're talking about the weather, and I wonder how many of them truly appreciate the seriousness this act carries and how much it weighs on survivors. The people who have felt it know.

And here's the irony: This past week was Mental Illness Awareness Week.

With the number of incidents occurring in such a short period of time, people were discussing this at lunch on Thursday. My conclusion: we are all guessing. What can we deduce from mad anomaly? Nothing that I can see. I want to believe that the missing "why" when something is good is the result of the fact that "good" happens much more than we are even aware.

I tagged you, kids.

Hi! I followed a link to your blog, and I found this post interesting.

I always wonder if the number of incidents like this are actually increasing (i.e. is there something going on in society right now that's predisposing to these sorts of acts), or are they relatively constant, and we hear about them more because of the media? I'm sure that all school massacres make the news (and I'm not even sure if that's bad or good), but what about in a time before the news, were there still as many problems like these?

Seemed like several postal workers over the course of a few years opened up w/guns at their workplaces. Then it seemed like more people were doing it in their non-postal work places, but the term had been coined.

It's sad that it happens enough for their to be a term for it.

This stuff is scary.

Your perspective is most interesting to me, because you work so directly with people who have done things the rest of us would not do. We ask "why" about their crimes, don't we?

It seems that there are a few obvious things which can be said:

1, these things tend to go in sets, one happens and then several others happen in the copycat fashion. The set ends, there's a time gap and a new one starts.

3, there are a few things which can be said about the shooter: male, on the verge of the popular groups, attention seaking, NOT totally isolated, NOT part of the normal-criminal set

Note on (2): Males were the prefered taget, now it is females. This appears to be a "I get more attention that way" factor.

It is hard to match past data with today's data: How violence was seen and treated was too different in the past. Plus, reporting was quite different.