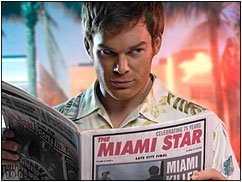 I've been watching the critics' reviews for the new television season and only one show really caught my eye: Dexter.

Dexter is a forensic investigator for a homicide squad who also happens to be a serial killer himself. The premise of the show is that he uses his interest in murder in a prosocial way---by killing the killers who 'got away'.

Altogether now: "Who thinks up this crap??"

Followed closely by: "ENOUGH with the serial killers already."

I'm suffering from serial corpse fatigue. It starts every morning when I read the local newspaper and see a column of blurbs entitled "Body Found". You'd swear they were passing out corpses around town like campaign fliers at election time. (One local park is particularly infamous, kind of the Hudson Bay of Charm City. When an elementary school class took a field trip there a while ago one of the young students asked the teacher: "Isn't this where they find all the dead people?")

Serial killers must be a good source of television advertising revenue, although I don't think they've maximized all their product placement potential. Just think of all the possibilities: Dexter could use a Black and Decker chain saw to dismember his victims (Although I have it on good authority that this is not the best method of body disposal. Time consuming and messy.) There could be a Lysol can placed near blood spills. You could have FTD florists delivering at funerals. Dow Chemicals could probably provide a couple 40 gallon drums of strychnine and rat poison. And then there's Seran Wrap for...eesh...let's not go there.

I realized that American television had hit bottom when a death row inmate told me he'd rather volunteer for execution than spend the rest of his life in an eight-by-eight foot cell watching Oprah. He got his wish. Now we've got Dexter.
Posted by ClinkShrink on Wednesday, October 04, 2006

Speaking of cereal, I tried a new one I loved: special K with vanilla and almonds, it was very good, 110 calories/serving.

I heard a commercial for this show on the radio and was troubled by the fact that while he helps the police, he's still actively murdering people. Warped entertainment, enough to drive us all to watch House. Ugh.

What's Roy up to these days? Is he still on constant call?

Ah, you are so healthy. I will not surrender my Reese's Pieces, particularly now that they are offering free iTunes downloads. People often speculate I must eat Fruit Loops. Apparently this passes for shrink humor for some folks.

Haven't heard hide nor hair from Roy; he will pop up soon with something learned and wise to post.

FooFoo appears to have disappeared. Has Dexter struck already?

You know, as of yesterday or the day before, there were already 300 murders in Philadelphia this year. I wanted to count what day of the year we're on, but I haven't had time yet. I dread turning on the news in the morning, but as I work in the city, I may as well find out if there's anything big I'm in for!

I've not heard of this show Dexter...think I'll avoid it!!

However, I'm liking that tonight is Thursday - Grey's Anatomy and ER are on!! :)

Maybe Foo is On A Short Leash?

OK, so what about those of us who love this crime stuff? Are we sick? I watch a LOT of crime TV, and I've decided I could never be a serial killer or even a one-time killer, because you just can't get away with murder anymore. All this high-tech CSI stuff will get you every time. Thanks for the tip on Dexter - sounds right up my alley! And Dinah, that cereal sounds awesome!

I've been with Roy. So there.

Phew! I was getting worried. Time to nail down the floorboards again.

FD, nothing wrong with you---you're just human. Most people do get fascinated by things that are exotic, unusual and/or a little dangerous. My psych residents on their forensic rotation (AKA the Bambis) had to get over that creepy-oooh--aahh feeling to interview their first killer.

Nowadays the criminals who fascinate me are the average Joe Shmoes who keep slogging away at trying to get better even when the system is kicking them in the teeth. It's amazing to me that someone can get released from prison with no resources and no place to live and can work themselves up to having a job, a car and a girlfriend within the year without getting into any new trouble. Those are the cases that give me goosebumps now. It impresses the heck out of me.

I meant that the guy, helping the police, but also "helping" by killing murderers, was not sounding so great, lol.