For ClinkShrink: A Dream Come True 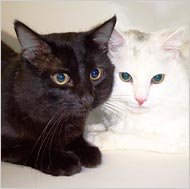 When I met ClinkShrink, in the last millennium, she was the proud owner of two lovely cats, Eli and Zac, may they rest in peace. And, yes, Eli--short for Elavil, and Zac--short for ProZac, were named because of their antidepressant properties. I think there was someone named Spike in there too, maybe after a Peanuts character? Memories....

So ClinkShrink, a devoted catatarian, never got new cats, kind of amazing. It turns out that she has bad allergies to cats, and was living a congested, droopy life, now all better without the cute little critters.

And now the good news, from today's hot-off-the-press New York Times: they've made Hypoallergenic Cats!! For a mere $4000, ClinkShrink can order a sneeze-free kitty! Let's hope she passes the interview. One brief suggestion, friend: When they come for the home visit, you might want to turn off Dexter.

Catatarian, by the way, is my own neologism related to cats and humanitarians.

How does anyone use the internet without a Siamese bugging to get on your lap? I mean, HOW? LOL!

The no allergy cat has been in the works for some time. I'm glad to see there are now kittens for sale.

I want one of the new oversize cats (about 40 pounds). Sadly, they're at genetic stabilization and still VERY expensive, the last quote I heard was about $7,000. Interestingly, since they used the Serval as the root stock these cats are REAL jumpers with ordinary play jumps above 6 feet.

Yeah, I saw that---looks like it's either a cat or a down payment on a new car, eh?

It is rather amazing I've been cat-free for over five years. I think I'm supposed to get an award or something for that. Abstinence hasn't been easy. Everywhere I go there are people tempting me: "Pssst! Hey buddy, wanna cat? It's just a little one. Only one can't hurt. You can handle it."

So no more cats for me personally. I have cat-owning friends where I can go for a quick fur fix and Harold the Vampire Cat will be expecting me this weekend.

Awww - cat-free.... Tony does work as an antidepressant, although sometimes he makes me insanely angry when he bites and attacks!

Anyway - when I was a child, our next door neighbors (I think?) had a cat named Shoes. The owners were named Sharon and Tony, and they were close friends of ours. My brother and I never owned our own kitty, so we loved to go next door and play with Shoes. We'd chase him all around and spend hours trying to get him out from under the bed. He was a nice kitty. Tony, however, was deathly allergic to cats - I'll never forget being around him, and him sneezing or taking allergy pills. Talk about devotion to love your wife so much that you'll spend 12 months of the year sick just so she can have a cat!

So when I got this kitty...my very first kitty... My mom and I were on the phone telling my brother about him. My brother wanted to know what kind of cat he was, and what he looked like. I said he looked like a tiger. So my brother wanted to name him Tony the Tiger, in part because of the obvious, but also because of Tony - the "father" of the first cat we'd ever been around! And that's it...Tony has stuck ever since.

My mom has taken to calling him Tony Baloney...so now I call him Tony B. I do still call him Spawn of Satan from time to time, but that's only when he bites me!! ;) I love when I come home, and I can lay down on the couch and sit him on my stomach and he's purring away as I pet him. That makes me smile.....granted, he's not like my big black lab Jake who runs around excited when I walk in the door (well...he used to, he's an old man now), but Tony shows his own happiness to see me in his own kitty cat way!! I luv him!

I've thought about getting him a brother or sister, but I don't think this place is big enough for the both of us, let alone if I add one more! I don't have a spot for an extra litter box or even more food and water dishes. Plus I'm worried that the place would start to smell, and I would really turn into that spinster "cat lady!" Ha...

An allergy free kitty - now if only they made cats that didn't bite. Oh they do, I just didn't pick me one of those!!

Carrie, get another cat. C'mon, everybody's doing it. Just one more won't hurt...

I used to figure that if I was a crazy cat lady I'd at least have an excuse for being crazy...

Dinah, I like the catatarian idea. It inspired me to invent a few cat-related neologisms of my own:

Centacatarian--someone who owns a hundred cats

Bibliocatalogia--trying to read with a cat lying on the newspaper

Catcophony--the retching noise made just before a furball

C'mon people, I'm sure I'm not the only one who thinks like this. Feel free to contribute a few of your own. We could publish a book to support Dinah through grad school.

It must be the weekend silly time coming up.

I'm HP and I'm a cataholic.

Started with 1, got sucked in by cute kitten 2 and then, this year, was stopped in my tracks by extremely cute kitty 3. I now wear blinkers...

Catastrophe? You know when the cat's less than impressed...so, an award for the cat with the cutest back view?

Catatonic - a feline pick me up.

Catoclear - the sudden clearing of a cluttered piece of furniture

What about one of THESE cats? I've been considering one for after we get a permanent place to live, since dh has allergies. I've read that these kitties are good for those, although keep em out of the sun alot. Indoor cat, anyway.

Not guaranteed allergy-free, but the majority of allergy people can live with this cat well, from what I've read.