The Patient as Criminal-- in "Free Society" 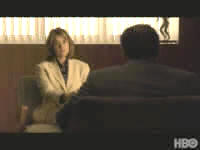 [posted by Dinah, not by ClinkShrink]

The patient is an unassuming man in a dark suit. He works in finance and supports a family. Actually, he supports the family quite well-- wife drives an Escalade, family takes nice vacations, he sports a Rolex and puts the kids through expensive schools. His income, he tells me, is quite good, so good in fact that the money is free-flowing, not from his salary, but from what amounts to white-collar crime on the job. Smarter than others, or so he believes, he is certain he won't get caught and talks about how he has the bases covered. He's not much for worrying about the future and his weekends are filled with cocaine-- of course he's not addicted. He comes to treatment, reluctantly at first and then willingly, even eagerly. His temper is volatile, his moods capricious and unpredictable, he and his wife fight constantly. And no, he won't try lithium, though I plug away with the suggestion.

I'm not so sure what he wants; he's my Tony Soprano, without the violence (I hope) or the mob (I also hope). I wonder if he's pulling my leg, telling these stories to create a bigger self for someone. I wish I could see the parking lot from my window; I haven't asked to examine the Rolex but I wouldn't know a real from a fake anyway. I'm not so sure what Tony is working on in treatment anymore either, but he still comes, and still Dr. Melfi treats him. Like Tony, my patient is not interested in changing, he's undisturbed by the illegality of his assorted behaviors, unbelieving that bad consequences might be right around the corner. I sit in his sessions and I wonder if should continue to treat him: he says therapy helps, that he's feeling better. Dr. Melfi plods on; I suppose that for now, I will too.
Posted by Dinah on Tuesday, May 09, 2006

Nice idea with this site its better than most of the rubbish I come across.
»