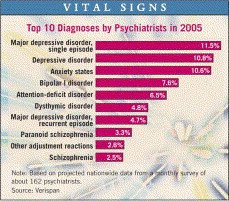 I am interested in the observations of the ClinkShrink in regard to the prevalence of mental disorders in a forensic setting. I am truly astonished at the rate of ASPD diagnoses I see. I have to believe that the ability to distinguish anti-social behaviour in an anti-social environment from personality disorder is on the decrease. Or it is cheap "catch-all" for any "difficult" forensic patient.

And pardon me, I thought you said "Vitriol."

Thanks for that comment, Roy. The most common diagnosis in my practice is definately recurrent major depression, though I may over use it. First episode seems to be rare, I get folks after they've already had a couple antidepressants via their internist, and often after they've had other psychiatrists involved.

Woops. Guess I shouldn'ta flushed that Lamictal, then.

DOH! (And what is it with people stopping at the first sign of a rash, instead of back down and then titrating really slowly? Given the number of meds that have diabetes risk, and my weight, this bugs me.)

Um, not looking for medical advice there, just kinda ranting, because from what I've read (granted, just a layperson), the knee-jerk reaction isn't always necessary.

Back to the flushing. Better down the toilet than what else I was gonna do with em (at the time), but still, geez! I also read somewhere that there's Prozac in pretty much everyone's drinking water.

That diagnoses graph seems off to me to, not that I'm any expert. Still, I get tired of the media saying that bipolar is diagnosed too much. In a way that makes one feel as though they are invalidating the whole dx. At least, that's how it comes across to me.

I thought "anxiety states" (disorders?) were one of the most common things . . . course, I LIVE and BREATHE fear, so my perspective is rather colored by that. I always thought it was just me (glad to recently find out it's not ME, it's anxiety whatsahoosits).

Vivitrex would sound too much like a "life-style enhancer" to use a euphemism. Going up? Anyone?

Er, you probably got my drift, there. I can see the ad now - Vivitrex - Live life to it's fullest.

Now I'm giggling at the thought (okay, so I'm a bit manic at the mo, sue me! Again, not lookin for medical advice by saying that (see, my fears make me say that cause I'm very afraid)

Interesting post. I shoulda just typed THAT, and left it there. (hee hee, rather funny with my Vivitrex commercial . . .)

I always wonder "How many of these diagnoses contain significant error?" (Taking a truth and diagnosing it as a mental illness or saying "this" is true, when this is clearly not true.)

I think of two such cases, one my own and one of a good friend:

Friend goes into psych to get help with feeling bad over loosing her children due to her own alcoholism. Psych demands that the only cause for alcoholism in females is sex abuse and starts treatment as for sex abuse patient. Friend has never been sexually abused/assaulted. Alcoholism was due to loving the booze and the booze-feeling. Psych caused big problem via this sexism.

I go in to get help with bad feelings due to a sexual assault I went through. Psych says "There are no female offender / male victim sexual assaults. Therefore, you are psychotic." Psych causes major problems due to this sexism: This one REALLY annoys me!

I talk to a lot of people. These forms of "Martha Mitchell" error are very common. Some in the men's movements say this form of error is the norm for male patients; I doubt that, but it wouldn't surprise me either.

How then are we to trust statistics if there is a problem of unknown size and severity?

Spiritual Emergency said...
This comment has been removed by a blog administrator.
May 28, 2006

Well, I like the question and I will hie me off to my blog in the morning and write about it!

Spiritual Emergency said...
This comment has been removed by a blog administrator.
May 28, 2006

Is that anything like anime? My son loves those shows.

But JW wonders how accurate the diagnoses are, and Cheryl suggests they are influenced by insurance status. I suspect that may be true to some degree. For example, if it is Blue Cross with MH carved out, a dx of depression secondary to hypothyroidism likely will be rejected by the carve-out; but if you have a contract with the carve-out only, then you might put down the less accurate depression NOS. But aside from such issues, I don't know of any insurance companies who will pay for, say, major depression, single episode, moderate severity (296.22) but won't pay for recurrent, or depression NOS, or even dysthymia, so i suspect insurance doesn't matter much within these more narrow diagnostic areas. (That being said, I know for a fact that most PCPs do not diagnose major depression, but use more general ICD9 diagnoses, such as insomnia, fatigue, or weight loss... otherwise they'd have to mess with the likes of Magellan and APS, rather than the somatic insurer.)

The larger area of variance in diagnosing comes more likely from incomplete history, poor access to prior records, and general sloppiness or habit on the part of the physician. Take a look at this article comparing diagnoses at serial admissions, finding that they are usually different.

"Psychiatric patients who were readmitted to the same hospital within 30 days frequently received different diagnoses and often diagnoses that were incompatible with one another, a new study shows.

Less than half of patients with bipolar disorder received the same diagnosis upon readmission, and 90% of patients with schizoaffective disorder were later diagnosed with bipolar disorder, major depression, or schizophrenia.
...
The variance in diagnoses was likely caused by unavailability of prior records, patients providing incomplete histories, time constraints that often limited patient evaluation to just 30 minutes, and a lack of rigor in applying DSM-IV criteria..."

That is just SAD. And sadly typical, in my experience.

Not that I've ever been admitted to a hospital, although there was one time in the ER, when they had a mental health guy, I think an ologist, interview me for a bit, and he sent me HOME, probably because I was so happy. What I didn't consciously realize until later was that I was so HAPPY because I thought I'd finally be getting some help; some expert who knew something about crap like that would SEE that my desperate actions meant I needed help. Instead he packed me off home with the older sister who's verbal and emotional cruelty was the last straw, and many of the previous straws. Later, upon reading my medical records from the ER, he had asked her if they'd take care of me and watch out for me and stuff, and she said yes . . . and then I was persona non grata (even more so than "usual") after coming home.

Sorry to go so long about that, but you'd think they'd at least ASK why a desperately-acting person who ended up in the ER, was seeming so happy. If asked, I probably could have figured out the answer, to tell them, but it didn't even occur to me to burst out with it over the top of his talking and questioning.

That was 10 years ago, and I SO SO WISH I had had help then (only gotten help within the last year, just starting this whole process).

Anyway, probably more than you wanted to read/know, but this system is so broken in so many ways, it's just horrid (I worked in the UW dept. of a health insurance company for 3 years, back when I could still work, so I understand much more than many).

Oh, a somewhat relevant addendum, just to put a perspective on the story; I thought I was just "depressed", as did those around me, who told and ordered me to just snap out of it, etc. Only in the the last year have I learned I'm bipolar, and IT SO FITS MY LIFE, that it makes me sad that I didn't get help 10, 15 years ago . . . that so much of my life was wasted struggling because 5 more minutes weren't spent, a few more @#$%%^ing questions weren't' asked . . . .

Sorry. To go on again. I'm passionate about this, and mental health issues, which you may notice if you ever visit my blog, lol. It's just, it's people's LIVES at stake, and whether or not they "get" much of one to live, or have to struggle day in and day out without understanding what the @##$% is wrong.

Okay, putting away my soapbox now, after I dump a little into the washer cause I need to do laundry. (Told you I was silly).