Results of the Survey on Who Are the Mentally Ill?

Thank you to everyone who participated!

Please note that the survey was not validated.  The data below was pasted directly from the Google "Summary of Responses" with no analysis or interpretation.

Anyone who has seen a therapist is mentally ill

People are mentally ill if they take any of the following medicines: The mentally ill are people with the following disorders: 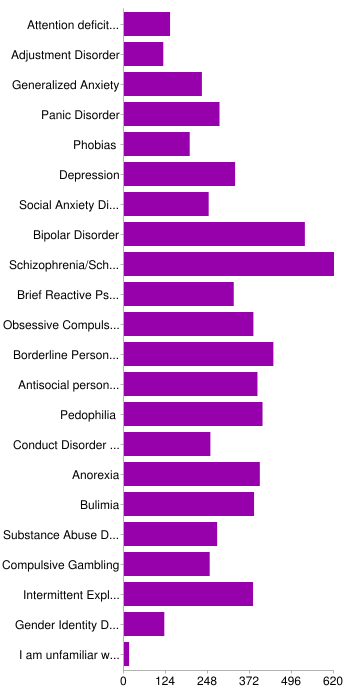 People who hear voices or have delusions are mentally ill

Anyone who has had a serious suicide attempt is mentally ill

A person whose behavior is volatile, erratic, and makes it difficult for them to maintain relationships and/or employment is mentally ill, even if they have not seen a professional to get a diagnosis

Someone who had treatment for a serious psychiatric disorder years ago and is now doing well, but still takes medications, is mentally ill

Someone who had treatment for a serious disorder years ago, but no longer needs treatment and is doing well, is still mentally ill

Anyone who gets long-term disability payments from the government for a psychiatric disorder is mentally ill, regardless of whether they have symptoms or take medications

I personally take, or have taken, psychiatric medications and/or I have been hospitalized on a psychiatric unit and I think of myself...

When I first saw this survey, I told Dinah it was a terrible survey and that she should take it down, because by even asking people 'who are "the mentally ill" ', it lends credence to the concept that one can put everyone with a mental illness -- or even more simply, a "mental health problem" -- into the same bucket.

This phrase -- "the mentally ill" -- promotes the stigma, stereotypes, and myths, that many people have about mental health problems of any sort. It also is a phrase that dehumanizes people by labeling them by their disease. "People first" language is preferred. "The person with schizophrenia", not "the schizophrenic."

Labeling people as their disease (or illness or symptom) dehumanizes people. They are no longer a person, but a disease. "Diabetics" don't seem to be bothered by this so much, but in psychiatry our patients continue to face discrimination, stigma, misunderstanding. By using these terms -- as many politicians and journalists still do -- it uses language to convey that it is okay to define people as their disease, that this is the most important thing to know about them. By breaking them down into people with, it is harder to say things that apply to all of them.

Are there surveys about Who are the Physically Ill? Or, Who are the Cancerous? Unfortunately, the survey did not have responses that said, "None of the above, because people are not defined by their illness and to say otherwise would be stigmatizing."


So, now that I have declared my bias against this term and this survey, I will share my thoughts on the results, anyway. The answers suggest that people are all over the place about what characteristics they deem necessary to put others into "the mentally ill" bucket. The most consistent themes seem to be those of persistence and severity. The longer that one has a condition, and the more severely it affects one's life and relationships, the more likely one is placed in the bucket.

I was also surprised to see bipolar disorder scoring almost as highly as schizophrenia; same with mood stabilizers like lithium scoring right up there with antipsychotics.
. . .
Final thought...

There once was a man from Nantucket
With a thought that was quite a nugget.
"The world is round," he exclaimed;
Which confirmed he's insane.
So they placed him in "the mentally ill" bucket.

i used to think of myself as "a borderline" and that led to such feelings of self-hatred and hopelessness. i'm glad that my perspective has changed.

I didn't feel like taking your survey because I also thought and still think it is a "terrible" survey. I've taken a good number of the drugs listed, prescibed by pcp and by shriinks. I've been in hospital on voluntary and involuntary terms. I've been given different psych diagnoses over the years. I've behaved oddly at times. I've been psychotic. I've had long stretches of remission. I've been on the older APs, the new ones, mood stabilizers, anxiolytics, antidepressants, you name it. I don't consider myself at all mentally ill in the sense that there is anything wrong with me from a medical standpoint. Stuff happens. When too much stuff happens it seems as though it's your brain exploding but it's not. Maybe whoever messed me up was mentally ill but probably not. Stuff happened to them. That's why the drugs don't work except to dull your senses and keep you quiet. I do believe that there are some people with actual mental illness but not enough to support the whole industry of psych drugs and the DSM etc. the DSM should probably be 10 pages long. Most shrinks could serve the world better had they skipped med school and gone into child welfare, advocacy, teaching parenting classes, working in schools to spot troubled kids. The government should fund that instead of paying money later on for psych bills.

I'm on board with Steven Daviss.

I labored over these survey questions and found I just couldn't answer. I may have said yes to a number of those, years ago; but, the older I get, the more I realize nothing is clear cut or simple, and labels can be damaging.

More and more, I disdain the classification and I believe Steven expressed, quite eloquently, why....

The first time I posted on here, I wondered if the shrinks would think I have BPD. Would that color there opinions of my responses? The name Borderline is something I chose because it's related to my blog and has nothing to do with mental health.

it's easy to pigeon hole and hard not to sometimes. They are the mentally ill. I am Borderline. What feelings do these labels stir up in people.

I respectfully disagree with the "terrible survey" comments. One can ask how a word or phrase is used without endorsing it. I agree that "people first" language is preferable. But the results are revealing whether to not the question is re-phrased, "Who suffers mental illness?" That is, there is no consensus, although severity and chronicity appear associated with the descriptor.

This is valuable information even if you feel, as I do, that "mental illness" is too vague, subjective, pejorative, and euphemistic to be useful. Llike the term "nervous breakdown" it doesn't mean anything specific, it intentionally covers a lot of ground, and it is used when the speaker can't express himself, for either linguistic or political reasons, more precisely.

I thought the survey was pretty impossible to answer because so many of the questions required more information.

@P-K: Absolutely. It's a hard survey to answer if you think about it too much. Whether by design or not, this survey didn't ask for subtle reflections on the nature of mental illness. It asked a simpler sociological question: What behaviors, treatments, etc lead many people to say, "Oh, there's a mentally ill person?" It's a survey of perception, not definition.

And now that I re-read it, all the questions ARE written "people first" even though the title is not.

I'm bipolar, have social anxiety & agoraphobia so intense at times that I can't deal with reading the Internet or even opening snail mail, and to make things interesting I'm epileptic and autistic. I self-identify as b@t$#!t crazy and don't have a problem with "mentally ill," "mental illness," or similar terms. The preferred term at the website I run is "mentally interesting," but there's no rule about using that phrase in place of any other.

Words matter, but there things that have a much greater effect on the stigma we have to deal with than politically correct speech. Such as how American news media hype stories that feature us as killers when the people with sanity commit vastly more crimes of violence per capita than we do, and are more likely to shoot up an office after one final bad performance review.

But if it takes "people before vague diagnoses" speech to fight that battle, I'll do it. I don't know if Dr. Daviss is aware of just how bad it is. Not only is a shooter presumed crazy until proven sane, but American news providers often refuse to correct misinformation, and will often distribute outright disinformation. The worst examples I've found were the constant reports that the spate of killings in China involved six mentally ill men, when only two had a mental illness and one of them had a long-running dispute with the family of his victim, who happened to be near a school when the event happened. One person in five is a statistical norm for a mental health problem in a random group of five people. As for the other, I still can't decide which is worse, NPR's constant digging for, and reporting on non-existent 'proof' of a mental illness in Maj Nidal Hasan's background, or that they fired Juan Williams for admitting he has a true phobia (i.e. an irrational fear) and then telling the press he needs to see a both a psychiatrist and publicist to deal with his problems.

Jerod, I agree with you wholeheartedly. The media is the problem. Now, when I hear the term "the mentally ill" I think of how NPR, CNN, and various other news outlets use this term in scare quotes to describe anyone who does something violent. He shot up the place, so they automatically assume he must be "mentally ill." They, then proceed to discuss what to do with the "mentally ill." I start to wonder who they are referring to exactly? I don't remember having this concern about the term until the media took off with it.

But, you're right it's the knee jerk reaction the media has in assuming violent acts are the result of mental illness that is the bigger issue, I think.


Thank you Jerod Poore for posting The phrase "mentally interesting." It is a positive way of considering the challenges and illnesses associated with mental health and wellness. There are many events, circumstances and injuries that can disrupt mental and physical health and it is not always clear when something needs to be classified a pathological disease. It makes me want to ask the question of friends, family and the clients I see in my work as a Nurse Practitioner, "do you consider yourself mentally interesting and what makes you so?" The followup question I would also want to ask is, would you prefer to be mentally interesting to mentally disinteresting?