Where are the Psychiatrists? Thoughts about Legislating Public Policy 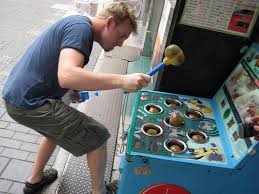 Why is this young man playing my favorite boardwalk game?

Today's post is up over on Clinical Psychiatry News.  You don't need to register.
Posted by Dinah on Wednesday, April 03, 2013

Maybe the better question is not about why the legislators are passing legislation that does not represent the needs and best interests of the constituency, but, why are these politicians still in office 15 years or more later? Consider this alleged stat said today on the C4 Show on WBAL radio: 96% of polled respondents said they do not support further tax increases as of now, and this was a figure from 2011, and yet, 60% of people reelected Martin O'Malady for Governor, and I would bet $20 that 85% of State of Maryland incumbents who have repeatedly voted for more tax increases before and since 2011 were reelected.

George Carlin said so poignantly back in 1996, that it is not the politicians who stink (different word but the point is made), but, the public. How do 96% of people claim to not want something that legislators have to pass, yet easily 40% or more vote the same loser back to "represent" them and said "representative" still does nothing of the sort.

It is beyond whack a mole, it is at least bordering on antisocial behaviors by these politicians. And having beyond a clueless electorate vote them back for another term. This state is hopeless, and you ask where are the psychiatrists?

We get the electorate we deserve! Note not misspoken, but, by the repetitive behaviors of Maryland voters, they have accepted it is not representation they seek, just rulers. And in Annapolis, rule is what goes on now!

And this is not cynicism, it is hardened reality!