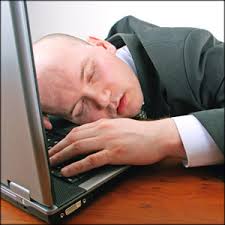 In Diagnosing the Wrong Deficit,  Dr. Vatsal G. Thakkar talks about the concept that the incidence of Attention Deficit Disorder has coincided with people getting less sleep as their days have gotten busier and longer.  He wonders if the symptoms that get attributed to ADD might be a result of too little sleep.  And if not too little, then maybe the wrong kind of sleep.  Dr. Thakkar goes on to talk about his own difficulties with focus and concentration and how he believes these symptoms were because his sleep architecture was disordered: too much dreaming, too little deep sleep -- a problem that was solved with a stimulant by day and a selective serotonin-norepinephrine uptake inhibitor (an SNRI such as Cymbalta or Effexor) by night.  He also mentions that clonidine, a alpha-2 adrenergic anti-hypertensive agent that is used by psychiatrists for -?- (sleep/ptsd/restless legs/whatever ails you)  might be useful to change sleep architecture and quality.

We all get less sleep than we used to. The number of adults who reported sleeping fewer than seven hours each night went from some 2 percent in 1960 to more than 35 percent in 2011. Sleep is even more crucial for children, who need delta sleep — the deep, rejuvenating, slow-wave kind — for proper growth and development. Yet today’s youngsters sleep more than an hour less than they did a hundred years ago. And for all ages, contemporary daytime activities — marked by nonstop 14-hour schedules and inescapable melatonin-inhibiting iDevices — often impair sleep. It might just be a coincidence, but this sleep-restricting lifestyle began getting more extreme in the 1990s, the decade with the explosion in A.D.H.D. diagnoses.

Interesting ideas and I'm wondering what others think of them.

Does more sleep get rid of the symptoms of ADD?  Since I'm not a big 'fan' of the controversial adult ADD diagnosis, it sounds good to me.   Is more sleep enough, or is changing how a patient sleeps with medications helpful?  And what about the use of clonidine?  I know child psychiatrists sometimes use it, and that it is used for the treatment of drug withdrawal, but I have never prescribed it.  Tell me what your experience with clonidine is.
Posted by Dinah on Monday, April 29, 2013

The problem (at least in kids) is that while disordered sleep can certainly lead to ADHD symptoms, and a high proportion of patients seen by sleep specialists may look like they have ADHD, only a minority of child/adolescent ADHD patients will have a diagnosable sleep disorder. However, the percentage of patients with sleep disorders appears to be higher in adult ADHD, although the exact relationship between sleep and ADHD is not as clear as what the NY Times article suggests.

As for clonidine, I'm really surprised it's not used more in adults, since it can be helpful for treating nightmares in PTSD patients and doesn't need to be titrated like prazosin.

Clonidine with Vyvanse were really complementary.

Vyvanse by itself, helped me actually do things and not just switch from channel to channel in my head and think about doing things, although we lowered the dose last year so it wasn't AS effective, still good effects though, but the higher dose had me wound up a bit toomuch . . .

The Clonidine helped calm any residual speediness of the Vyvanse, as well as other agitation that has surfaced because of difficult experiences we've been going through this last year. The Clonidine did things for me, combined with the vyvanse, that felt like a brilliant combination, but since it's been since January that I was on it, and only for a week and a half all told, it's kind of hard to remember. It helped me not be so . . . reactive? Don't know if that's the right word . .

Due to other stupid medical issues, I couldn't keep taking it, but that's hopefully because of something else, and I hope to eventually be able to take it again, it was a positive experience for me.

I wouldn't describe it as tranquilizing or sedating . . . settling me down isn't quite right either . . .it felt more like helping balance a ship that had listed due to ballast shifting . . . if that makes any sense.

Me, I'm one of those people with an adult ADD diagnosis, however, based on how I was in school as a kid, it seems clear to me (and i'm not a doc, though) that it was present then (I only made it through school with awesome grades because I could skim the biology chapter that I hadn't read, on the bus to school, and ace the test, as well as I picked up and retained info exceptionally well (basically, the hell my childhood was, my, er, intellect, was the only thing I had to rely on, to comfort me, to feel good about, so I apologize if I sound arrogant about it.)

I can't find any direct references to studies but I keep reading that 30 to 35% of kids who have sleep breathing disorders were misdiagnosed as having ADHD. I mean, if you're not getting good quality sleep such as when you have sleep apnea and are frequently prevented from going into deep sleep, you are going to have symptoms that look like ADHD but aren't.

By the way, speaking of PTSD, Barry Krakow, a sleep medicine specialist, has done alot of work with PTDS patients and found that many of them developed sleep breathing disorders over time. Pap therapy was quite helpful.

Anyway, I think screening for sleep disorders should be standard procedure for all physicians, including psychiatrists. I wish I had a nickle for all the stories I have read where people complained for years about being tired only to be blown off by their doctors. It turned out they had some type of sleep breathing disorder.

As an FYI, for those of you who don't want to read the whole article, the author turned out to have narcolepsy.

I do believe there is a huge genetic component to ADD/ADHD---my husband's family has problems with it, but they also have dopamine-transporter problems, too (so Parkinsons', dementias, and criminal behaviors are rampant in his family tree). Still, there are environmental factors that can exacerbate or ameliorate these problems. That means being willing to implement or accept boundaries: a regular bedtime routine, good diet, exercise, and stress maintenance.

I think about Screwtape. As a senior tempter, he was able to exploit human weaknesses to win souls. I think he's refined his technique to win souls by tempting us with happy shiny iDevices...marketers who tell us we can have it all, and society that celebrates people who can seemingly get by on minimal sleep (so sleep is for sissies and weak people).

I get at least seven hours of sleep nightly out of a commitment to my co-workers. It also helps that I'm a migraineur. Spontaneity is not my strong suit.