Why You Should Care About FISA 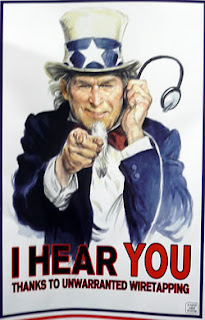 I know everybody's been concerned about the fiscal cliff lately, but meanwhile something important has slipped under the radar that could be more serious than that for all of us.

Last week both houses of Congress overwhelmingly passed a five year extension to the Foreign Intelligence Surveillance Act (FISA), the law which allows warrantless eavesdropping, wiretapping and monitoring of anyone who may represent a threat to national security. The renewal has been signed into law already by President Obama.

Under this act, government investigators can datamine telephone, email and other online communications pretty much at will. Congress voted down proposed amendments to allow mandatory annual reporting of how often this is done or who this is being done to.

I know this sounds a bit histrionic, but consider this statement from Rand Paul last week:


So this isn't something that, as a mental health professional, you can just shrug off since you're not 'one of the bad guys.'  Particularly now since the public and the government have pressing interests in liberalizing the flow of information between public safety and mental health systems in light of all the recent shootings. The FISA extension grants that authority. If a mental health patient could be deemed a general threat to public safety (read: national security)...well..think about it. Read the full Rand Paul link.

I know everybody is concerned about CPT code changes and impending reimbursement issues, but there's other stuff going on too right now. If you would like to know how your Congressman voted on this issue, you can read the roster here.

[My first post about this topic was in April 2006. It was the seventh of nearly 2000 blog posts we've put up. Seven years later, nothing much has changed.]
Posted by ClinkShrink on Friday, January 04, 2013

The state of our political system is rife with narcissism and antisocial traits. I equally am concerned with this knee jerk reactivity by people when problems occur that require a multifaceted approach. But, in our field alone as example, it is about meds first, only, and always these days. And our leaders are not interested in frank and terse discussions. We have a President who embraces assassination as a fair and reasonable course of action with dissidence.

That should scare the crap out of anyone who has any idea what are the principles and foundation of what this country was founded on. 2013, as going on now, will be a very disturbing and frightening chapter for this country. And mental health care will regress seriously unless the providers across the discipline stand up for what is right, not what is convenient or easy.

CPT changes are just another nail in this coffin. Nails our own colleagues are hammering in to seal the profession in!

Sarebear said...
This comment has been removed by the author.
January 04, 2013

On NPR today I heard a woman who said that "we need to stop people with serious mental illness" from having access to guns. Who is to make the determination of who has "serious mental illness"? Comments like these make me worry that someone like me could be lumped into the "seriously mentally ill" category even though my mental health is fine, because of my history. Creating a category like "seriously mentally ill" in the eyes of the government, seems like it could result in a serious loss of freedom. If I had known that seeking help when I did would have resulted in permanent restriction of my rights, I would not have sought help. That is pretty serious for the profession if other people think as I do. Imagine if there were a national registery of "seriously mentally ill" as there is for sex offenders. What if this information were public knowledge as it is for sex offenders and people went to websites to see maps of the neigborhood showing names and addresses of the "seriously mentally ill". As soon as we as a nation start down this road there is no telling where it would end. Already there is some forced medication, but imagine if everyone who ever entered the mental health establishment could be forcibly medicated for life or barred from professions. It is a really slippery slope.

As one who wants stricter gun control laws, I totally agree with everything you said. Heck, it is the folks who don't have alleged mental illness that I would trust less with guns.

Don't even get me started on the forced medication issue.

And even though I haven't seen a psychiatrist for a few years, I worry because of electronic medical records, that I won't be able to keep my history hidden if I want to avoid disclosing it at future doctor visits. I have sadly learned that doing so results in horrible medical treatment.

I remember having lunch with a friend a couple days after 9/11. A big part of our discussion was our fear that terrible tragedy would lead to another tragedy--the vast expansion of governmental power to spy on its citizens and to curtail our freedom all in the purported interest of national security. In the years since, our disucssion has proven prescient. It is shocking to me how most people have simply acceded to this. It should be front and center of our national debate.