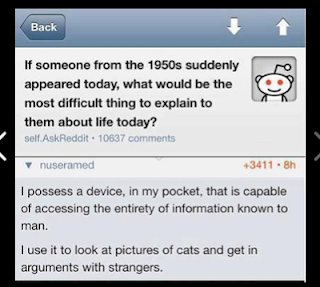 I'm in the generation that straddles techo-life.  I want to say "I remember when..."  but that does sound so very old.  Okay, I remember when you stayed home to wait for a phone call, stood up to change channels,  went to the neighbors' because they had a color TV, Smith-Corona typewriters with the carriage return, carbon paper for duplicates, teachers handed out mimeos they'd cranked out that smelled of fresh ink, libraries had microfilm, people wrote and mailed letters to communicate.  For my 5th grade "invention," I wrote about a device that you could talk in to and it would type out your words -- Mr. Shannon liked it, but said such a thing would never exist.  In college, I thought word processing was awesome (until the computer crashed with your paper on it), in med school I got an answering machine, and no, I don't remember my first remote control.  I do remember my first experience with e-mail, I asked Clink to show me, and the only person on her address list I knew was a mutual friend across the country-- I sent him an email and he wrote back to say that he and his wife and two children would be visiting and could they stay at my place for a week?  That was enough email for me for a while, but I did enjoy his visit (and his wife, and his kids...).  And Clink has spent 20 years telling people that I thought the dial-up site I used to look at houses --( after all,  if people were going to come visit like this, we needed a bigger place) -- was much too slow and the Internet would never catch on.

We had a party line, so to make a call we picked up and is someone was on the line, we hung up gently. We kept calls very short to respect the other people who shared the same line. We had milk delivered to the little box with a door to the outside and a door to the inside. Our US mail was delivered twice a day, and items order through the mail took 6-8 weeks to arrive if you were lucky. We went to the catalog store to look at the big catalogs and order clothes. I was married before I owned a remote control or answering machine. We made our first computer from a kit in the late 1970's.

At school, they showed us this program with a "turtle" that drew things; no one explained the coordinate system or other commands to me, after seeing a few, well, the next lunch that I was the fastest to run back to the library when the shool doors opened in the morning, and sign up to use the apple IIe, I went to town with it, deducing other commands based on what I'd seen. I actually was in there for HOURS, the place was dark but I was programming my heart out.

I remember once we had a mailbox stuffed with travel brochures for over a year, because my sister clipped a page from a magazine and checked something off.

My parents were annoyed but it was fun to see about all these places all over the place; I wonder if they thought we were a travel agency, it was funny. Made the mail fun (which was nice since we had to walk down a long dirt driveway to get it)

Analog spam. Before even there was much junk mail, even. My sister and I would make up stories for our Barbie dolls and those places.

I remember as a child being up late sick, and the only thing on tv was a test pattern. That sucked.